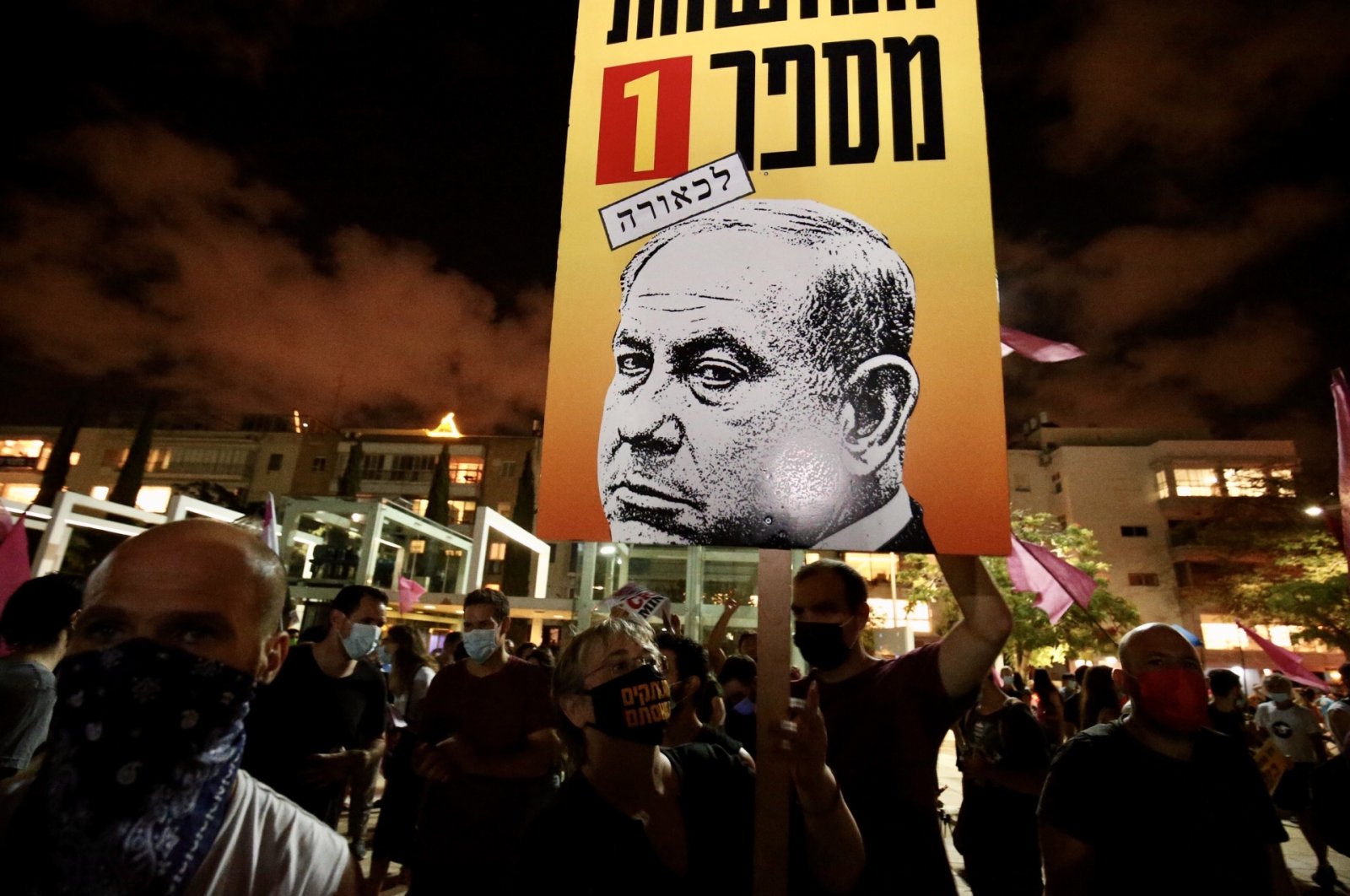 Tens of thousands of Israelis calling on Prime Minister Benjamin Netanyahu to resign demonstrated across the country Saturday evening, saying he is unfit to rule while on trial for corruption charges and accusing him of mismanaging the nation’s coronavirus crisis.

The Black Flags movement, one of the groups behind the protests, said more than 100,000 Israelis demonstrated at some 1,200 locations across the country against Netanyahu and his government for the 16th Saturday in a row. Protesters gathered across the country due to a nationwide lockdown that has barred them from protesting at the usual site outside Netanyahu’s official residence in Jerusalem. The current lockdown regulations allow people only to gather within 1 kilometer (less than a mile) of their home.

The largest gathering at Habima Square in central Tel Aviv drew thousands of protesters, who blew horns and pounded on drums and tambourines. The protesters waved pink and black flags symbolizing various grassroots protest movements. Some of the banners, using Netanyahu’s nickname, said: “Bibi, you are destroying my future.” Others read “Go!” Police reported clashes with the protesters in Tel Aviv and Jerusalem.

Israeli police on Sunday fined thousands of people for violating coronavirus rules during religious festivities and arrested four protesters at anti-government demonstrations. Police said they handed out fines to thousands of ultra-Orthodox Jews who defied social-distancing and mask-wearing rules late on Saturday, gathering in Jerusalem and elsewhere to mark the Simhat Torah holiday. Police also identified and fined four coronavirus patients at a Jerusalem synagogue and stopped two more patients at a roadblock outside the city, a police spokesperson said.

Netanyahu is on trial for fraud, breach of trust and accepting bribes for his role in a series of scandals, and the demonstrators have staged weekly gatherings for the past four months demanding that he step down. Netanyahu denies the charges and accuses the protesters of being “leftists” and “anarchists.”

The marches have also been fueled by the government’s response to the pandemic. After appearing to contain the outbreak last spring through a tight lockdown, it reopened the economy quickly and the infection rate soared. The country of 9 million people has one of the highest infection rates in the developed world, and the death toll is approaching 2,000. With infections at record levels, Israel imposed another lockdown last month, further hurting business owners and entrepreneurs who have been a key component of the protests. The economy has been devastated by the closures, and many of the protesters are young Israelis who have lost their jobs.

Netanyahu’s trial, the pandemic and the plummeting economy are adding further pressure on his emergency government, which was formed in May in partnership with his rival Benny Gantz.

Last week, the government’s tourism minister of Gantz’s Blue and White party resigned over the failure to contain the outbreak. Violations of the lockdown by top government officials, including a Cabinet minister from Netanyahu’s Likud and Netanyahu’s wife Sara last week, have further hurt public trust in the country’s decision-makers.