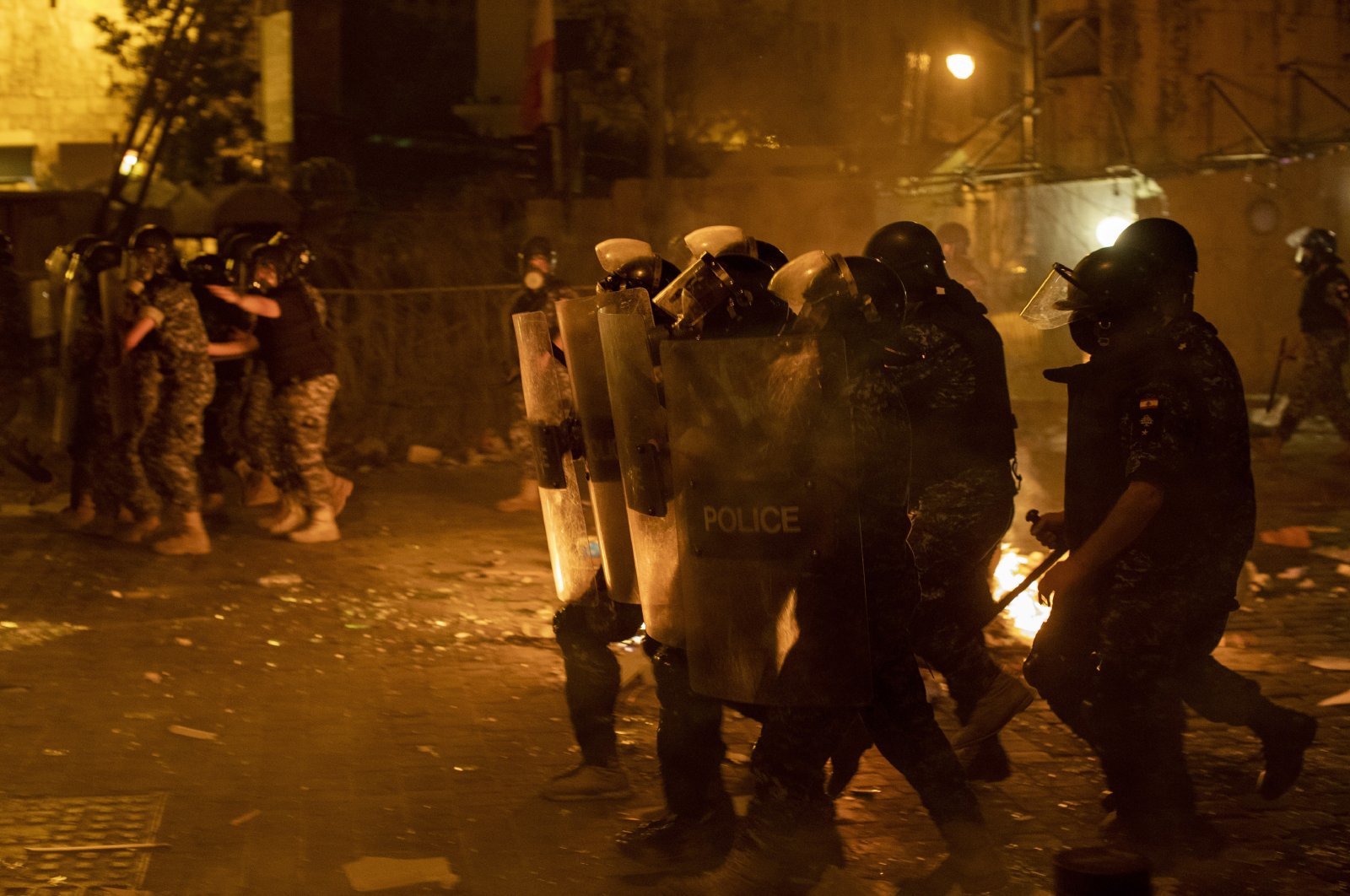 Discontent, anger grows among Lebanese as protesters held a rally in central Beirut, pelting security forces with stones, setting tires on fire and shouting against the political elite after the deadly blast

Lebanese protesters returned to streets in Beirut after the biggest blast in the Lebanese capital's history tore into the city, killing at least 154 and leaving the heavily indebted nation with another huge reconstruction bill, as evidence mounts of government negligence in the lead up to the massive explosion.

Security forces fired teargas at a furious crowd late Thursday, as anger boiled over at the government and a political elite, who have presided over a nation that was facing economic collapse even before the deadly port blast injured 5,000 people. The small crowd, some hurling stones, marked a return to the kind of protests that had become a feature of life in Beirut, as Lebanese watched their savings evaporate and currency disintegrate, while government decision-making floundered.

As search and rescue operations have been ongoing, dozens of people are still missing. Some 300,000 people – more than 12% of Beirut's population – are unable to return to their homes because of the explosion, which blew out doors and windows across the city and left many buildings uninhabitable.

Officials have said the blast, whose seismic impact was recorded hundreds of kilometers away, might have caused losses amounting to $15 billion – a bill the country cannot pay when it has already defaulted on its mountain of national debt, exceeding 150% of economic output, and talks about a lifeline from the International Monetary Fund (IMF) have stalled. The IMF warned that it was "essential to overcome the impasse in the discussions on critical reforms." The international body urged Lebanon, which is seeking more than $20 billion in external funding and now faces billions more in disaster costs, "to put in place a meaningful program to turn around the economy" following Tuesday's disaster.

Notably, none of Lebanon’s top politicians have toured residential areas damaged by the blast, though President Michel Aoun and others did visit the port. Hours after French President Emmanuel Macron left Gemmayzeh, Justice Minister Marie-Claude Najm tried to visit, only to be driven out by protesters. “Resign, you criminal! Would you accept anything less if your sister were among those killed?” one protester shouted at her. As she was about to respond, another sprayed her with a water hose. She left as protesters chanted, “Revolution!” and “Resign.”

Over 57,000 Lebanese signed an online petition to "place Lebanon under a French mandate for the next 10 years" as of Friday morning, as reported by Deutsche Welle. "Lebanon’s officials have clearly shown a total inability to secure and manage the country," the petition read. "With a failing system, corruption, terrorism and militia the country has just reached its last breath."

The move came after Macron's visit to Beirut on Thursday. Macron – whose country was once Lebanon’s colonial ruler – presented himself as a champion for the Lebanese to push change on their leadership. After talks with Lebanese leaders, Macron announced his country will organize a conference in the next few days with European, American, Middle Eastern and other donors to raise money for food, medicine, housing and other urgent aid. But he warned Lebanon’s political elite that he wouldn’t give “blank checks to a system that no longer has the trust of its people.” He called on them to create a “new political order.”

The blast was apparently caused by the ignition of 2,750 tons of ammonium nitrate, a chemical used for explosives and fertilizer, that had been stored at the port since it was confiscated from an impounded cargo ship in 2013. The investigation is focusing on port and customs officials, with 16 employees detained and others being questioned. But many Lebanese say it points to much greater rot that permeates the political system and extends to the country's top leadership.

Lebanon's president said on Friday an investigation into the biggest blast in Beirut's history would examine whether "external interference" had a role. "The cause has not been determined yet. There is a possibility of external interference through a rocket or bomb or other act," President Michel Aoun said in comments carried by local media and confirmed by his office. He said it would also consider whether it was a result of negligence or an accident. He previously blamed negligence in the storage of highly explosive material for years at the port. The U.S. has previously said it has not ruled out an attack. Israel, which has fought several wars with Lebanon, has also previously denied it had any role.