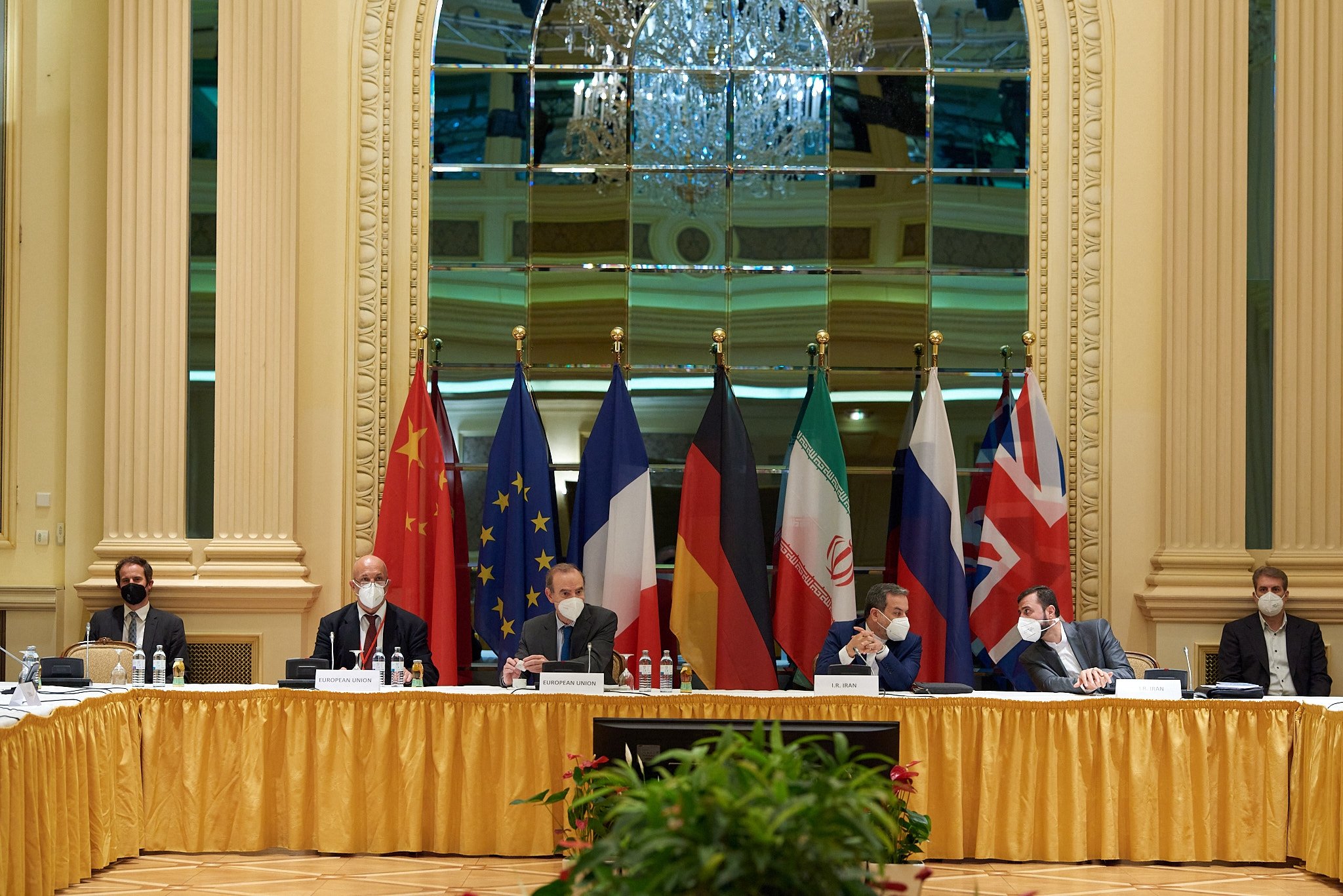 Delegation members from the remaining parties to the Iran nuclear deal – Germany, France, Britain, China, Russia and Iran – attend a meeting as they try to restore the deal, at the Grand Hotel of Vienna, in Vienna, Austria, May 1, 2021. (Photo by Handout / EU delegation in Vienna / AFP)
by French Press Agency - AFP May 01, 2021 10:39 pm
RECOMMENDED

Russia believes that there is "cautious and growing optimism" concerning a nuclear deal with Iran and that a positive outcome will arrive within three weeks following Saturday's third round of negotiations in Vienna, where parties want to entice the U.S. back into an accord.

A diplomatic source from the E3 powers of Britain, France and Germany said, "We have yet to come to an understanding on the most critical points. Success is by no means guaranteed, but not impossible."

"We have started writing texts and this is where the work actually progresses rather slowly, since working on the text requires accuracy and considering that some issues are still disagreed on, the work goes on slowly."

"Sanctions that are ... sector-related ones – such as sanctions on Iran's energy sector, which includes oil and gas, or sanctions on the auto industry, banking and finance, insurance and ports – based on agreements made so far, all these sanctions must be lifted. And there is agreement on it, too," he added.

This follows Araghchi's comments two weeks ago when he said a "new understanding" was taking shape.

The deal, which curbs Iran's nuclear program in exchange for sanctions relief, has been on life support since then U.S. President Donald Trump bolted in 2018.

The remaining partners to the 2015 accord have been engaged in negotiations since early April to try to revive it.

The third round of talks started on Tuesday and, after several days of technical discussions between expert groups, delegations met on Saturday.

Representatives of the parties still in the agreement (Iran, China, Russia, France, Germany and the United Kingdom) who met for just over an hour noted the "indisputable progress" achieved, Russian diplomat Mikhail Ulyanov said on Twitter, adding that he was cautiously optimistic.

"It's too early to be excited, but we have reasons for cautious and growing optimism. There is no deadline, but participants aim at successful completion of the talks in approximately three weeks. Is it realistic? We will see," he wrote.

The delegations will return to their respective capitals and resume talks from next Friday, Iran's Foreign Ministry said in a statement.

"Considering the commission's previous decision regarding speeding up the talks process, this week's talks continued quickly in bilateral format and the sides tried to minimize disagreements regarding the texts," it said.

"The sides agree that the work must continue with more speed and seriousness in the future round of talks."

The E3 diplomatic source said the talks had taken place in a "serious and focused atmosphere despite outside turbulences."

"As E3, we will redouble our efforts to make this deal possible," the source said.

Earlier, a European diplomat said that the American, European, Russian and Chinese delegations held a joint meeting on Saturday morning, but without Iranian representation as Tehran has refused to negotiate with the U.S. formally but they did have indirect talks in Vienna in early April.

As well as bolting from the accord, Trump's administration slapped sweeping sanctions on Iran, which in turn started ramping up its nuclear activities including enriching uranium at 60% at its Natanz facility.

New U.S. President Joe Biden supports the JCPOA – the acronym for the agreement with which Iran was in compliance before Trump's sanctions – but has called on Tehran to roll back its measures before Washington ends sanctions.