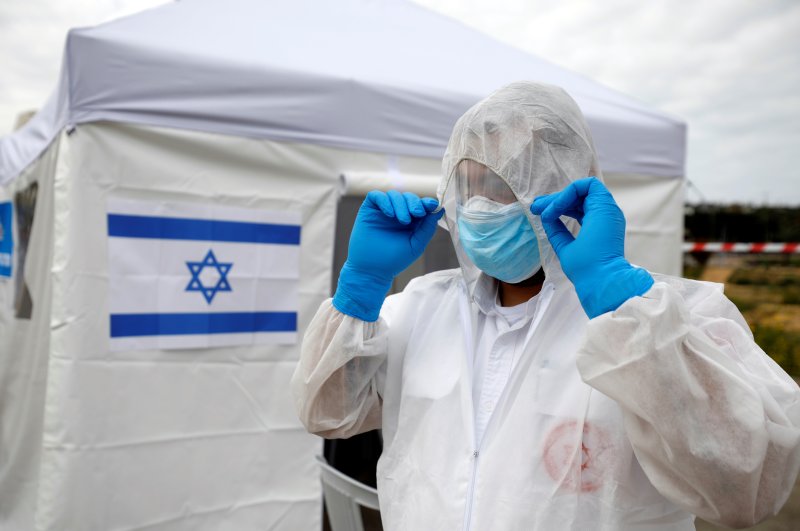 A paramedic adjusts his protective suit as he prepares outside a special polling station set up by Israel's election committee so Israelis under home-quarantine, such as those who have recently traveled back to Israel from coronavirus hot spots can vote in Israel's national election, in Ashkelon, Israel March 2, 2020. (Reuters Photo)
by French Press Agency - AFP Mar 04, 2020 11:45 pm
RECOMMENDED

Israel on Wednesday imposed tough new travel restrictions on five European nations due to fears of coronavirus, barring entry to almost all non-residents of the Jewish state arriving from these affected countries.

Israel had earlier in the day ordered all citizens and residents returning from five countries – France, Germany, Spain, Austria and Switzerland – to abide by a 14-day home quarantine upon entering the country.

Guidelines issued by the health ministry on Wednesday afternoon declared that foreigners from the affected European countries "will not be able to enter Israeli territory unless they can prove they have a place to stay in quarantine."

The interior ministry issued a statement in the evening saying tourists from these countries "will not be able to enter Israel from Friday at 8:00 a.m.," adding that: "Those who arrive before this date will not be turned back." The ministry further added that the restrictions did not apply to people who merely transited through airports in one of the listed countries.

"We are at the peak of a global epidemic," Prime Minister Benjamin Netanyahu said during his announcement of the latest travel restrictions. "We are in a better situation than other countries because, since the beginning, I have given instructions to the maximum possible, not the minimum" level of precaution. "And we have taken strict, very strict measures, to slow the spread of the virus," Netanyahu added.

Israel currently has 15 confirmed cases of the virus but no deaths, with some 7,000 others already in home-quarantine.

In elections on Monday, thousands of people under quarantine voted at special polling stations staffed by officials in full protective gear.

The health ministry on Wednesday ordered a ban on public gatherings of more than 5,000 people.