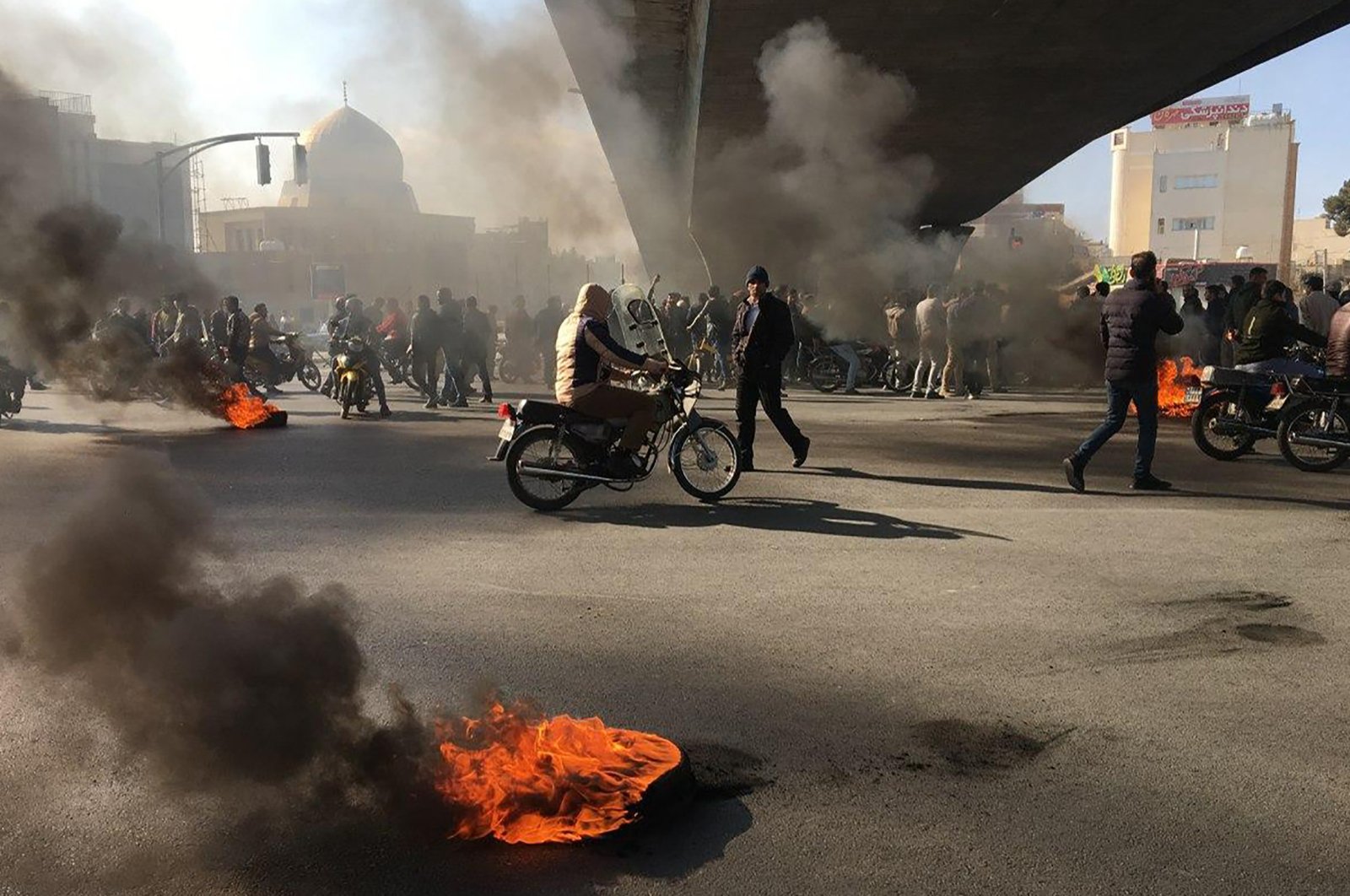 Iranian protesters rally amid burning tires during a demonstration against an increase in gasoline prices in the central city of Isfahan, Iran, Nov. 16, 2019. (AFP Photo)
by Yusuf Selman İnanç
Apr 29, 2020 11:23 am

Iran, one of the hardest-hit countries by the coronavirus outbreak, may witness a new round of protests as the pandemic, along with U.S.-imposed sanctions, causes a significant deterioration in the nation's economy

The coronavirus outbreak has plunged Iran into one of the most significant crises in its modern history. The apparent inability of the government to handle the pandemic has resulted in the country becoming the epicenter of the outbreak in the Middle East with nearly 95,000 confirmed cases and more than 5,877 deaths. While critics of the Iranian government claim that the real numbers are higher, the country suffers from economic deterioration that may trigger social unrest in the near future. As the latest round of protests in November was brutally suppressed, the increasing pressure on the economy may lead to a renewal of the protests.

The Iranian economy had already been suffering sanctions, major losses and structural problems when the outbreak erupted. With inflation as high as 35%, the highest rate in the last eight years, the non-oil growth rate is estimated to remain at zero for this year. The unemployment rate stands around 12%, while the unemployment rate for youth is as high as 27%. In addition to these figures, the income of 70% of households in Tehran has decreased since the beginning of the outbreak. The inflation rate for February skyrocketed to 37%, revealing their considerable loss of purchasing power. In addition to these negative figures, the coronavirus outbreak seems to have exacted a heavy toll on the Iranian economy. Bearing in mind that at least 50% of the country's revenues are obtained through trade with its neighbors, the closure of the borders by adjoining countries, including Turkey, with which the trade volume exceeds $5 billion annually, will have a huge impact on the economy’s worsening situation. While the prices of food and hygiene products soared, travel restrictions have ground tourism to halt.

The coronavirus outbreak alone does not account for the deterioration of the economy but it has brought about further negative impacts. The main reason for the current economic situation is U.S. sanctions. Under the presidency of Donald Trump, the U.S. has been applying a "maximum pressure" strategy toward Iran. In other words, the era of détente with the U.S., which occurred during the Obama administration and led to a nuclear deal, came to an end. Instead, the Trump administration has begun imposing its policy, aiming to curb the regime’s ability to maneuver in the region. As a result, the gross domestic product (GDP) growth rate plunged below zero, the unemployment rate has been constantly increasing, oil exports have been plummeting, its currency has been losing power significantly against the U.S. dollar and other major currencies, and living costs have risen dramatically. At the end of last year, Iranian President Hassan Rouhani admitted that Iran’s economy was hit hard by the re-imposition of the sanctions, saying, “the successive rounds of U.S. sanctions on Iran cost the Islamic Republic $100 billion in oil revenue and another $100 billion of investment money.”

The increasing authoritarian tone of the Iranian regime along with its economic deterioration may cause the eruption of new protests after the coronavirus outbreak ends. It is clear that the pandemic’s effects on the economy will be more harshly felt in the coming months.