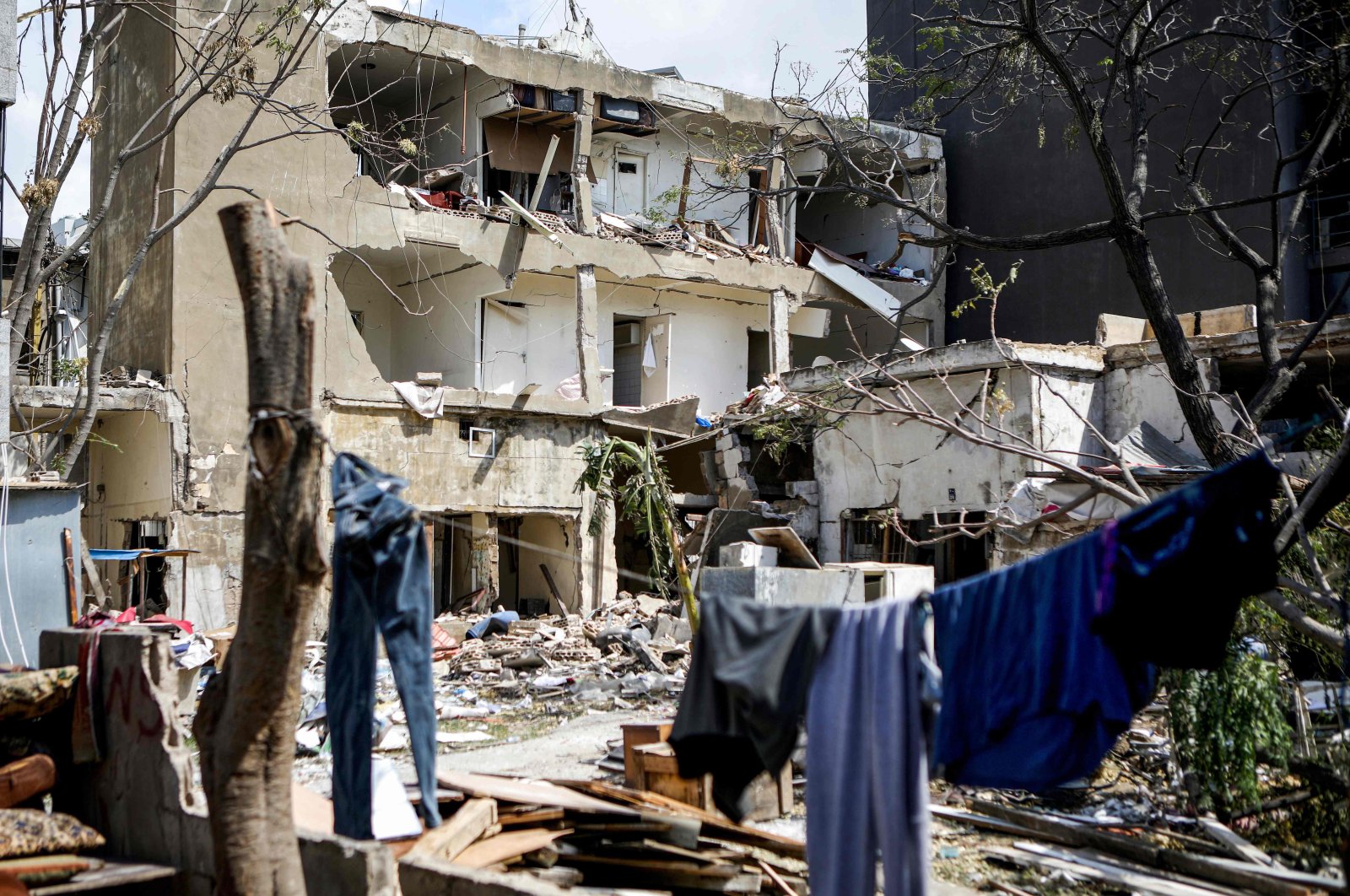 A view of damaged buildings in the Karantina (La Quarantaine or Quarantina) neighborhood of Lebanon's capital Beirut which lies directly off the ravaged port, in the aftermath of a colossal explosion that occurred days prior due to a huge pile of ammonium nitrate that had languished for years at a port warehouse, Aug. 9, 2020. (AFP Photo)
by agencies Aug 09, 2020 8:43 pm
Edited By Nurbanu Tanrıkulu Kızıl
RECOMMENDED

French organizers say international donors have pledged a total of 252.7 million euro ($298 million) in emergency aid during the conference for Lebanon.

The United Nations said $117 million will be needed over the next three months for health services, emergency shelter, food distribution and programs to prevent the further spread of COVID-19, among other interventions.

Following is a roundup of aid pledges, notably those announced Sunday during a remote donor conference hosted by French President Emmanuel Macron and attended by nearly 30 countries, as well as the European Union and Arab League:

France has been sending tons of medical and food aid to its former colony, dozens of search and rescue personnel and forensic experts to aid the investigation, as well as reconstruction materials.

On Sunday, the amphibious assault helicopter carrier Tonnerre left the French Mediterranean port of Toulon for Lebanon, stocked with human and material aid, including food and construction equipment.

Qatar has flown in field hospitals and medical aid, and on Sunday its ruler Emir Sheikh Tamim bin Hamad Al Thani pledged emergency aid of $50 million. He said funding toward "the reconstruction of Beirut" would be announced soon.

U.S. President Donald Trump, without stating a figure, said Washington "stands ready and willing to continue providing aid to help the people of Lebanon in their recovery." The White House statement did not provide figures, but the government has announced $15 million so far.

Britain on Sunday pledged 20 million pounds ($26 million) in addition to 5 million pounds already announced for emergency aid, notably through the British Red Cross. London has sent a medical team and humanitarian aid experts, and the Royal Navy ship the HMS Enterprise is reportedly on its way.

Spain is to deliver medical materiel and equipment for the homeless in an army plane on Tuesday. It will donate 10 tons of wheat through the Olof Palme International Foundation.

Brazil pledged to fly medical material and medicines to Lebanon and to send 4,000 tons of rice by sea.

The French government said representatives from 36 countries and organizations took part in the meeting to raise funds to help the country recover from the massive deadly explosion in Beirut.

Meanwhile, the International Monetary Fund (IMF) said Lebanon must carry out urgent fiscal reforms in order to be able to tap into relief funds.

IMF managing director Kristalina Georgieva said she is critical of the "shortage of political will to adopt and implement meaningful reforms" to date.

"We are ready to redouble our efforts. But we need unity of purpose in Lebanon – we need all institutions to come together determined to carry out much-needed reforms," said Georgieva.

"Commitment to these reforms will unlock billions of dollars for the benefit of the Lebanese people," she adds.

The IMF is focusing on restoring the solvency of public finances, safeguards to prevent capital outflows and stemming losses from state-owned enterprises. The fund is also calling for a wider social safety net, warning that otherwise the vulnerable will bear the brunt of the crisis.