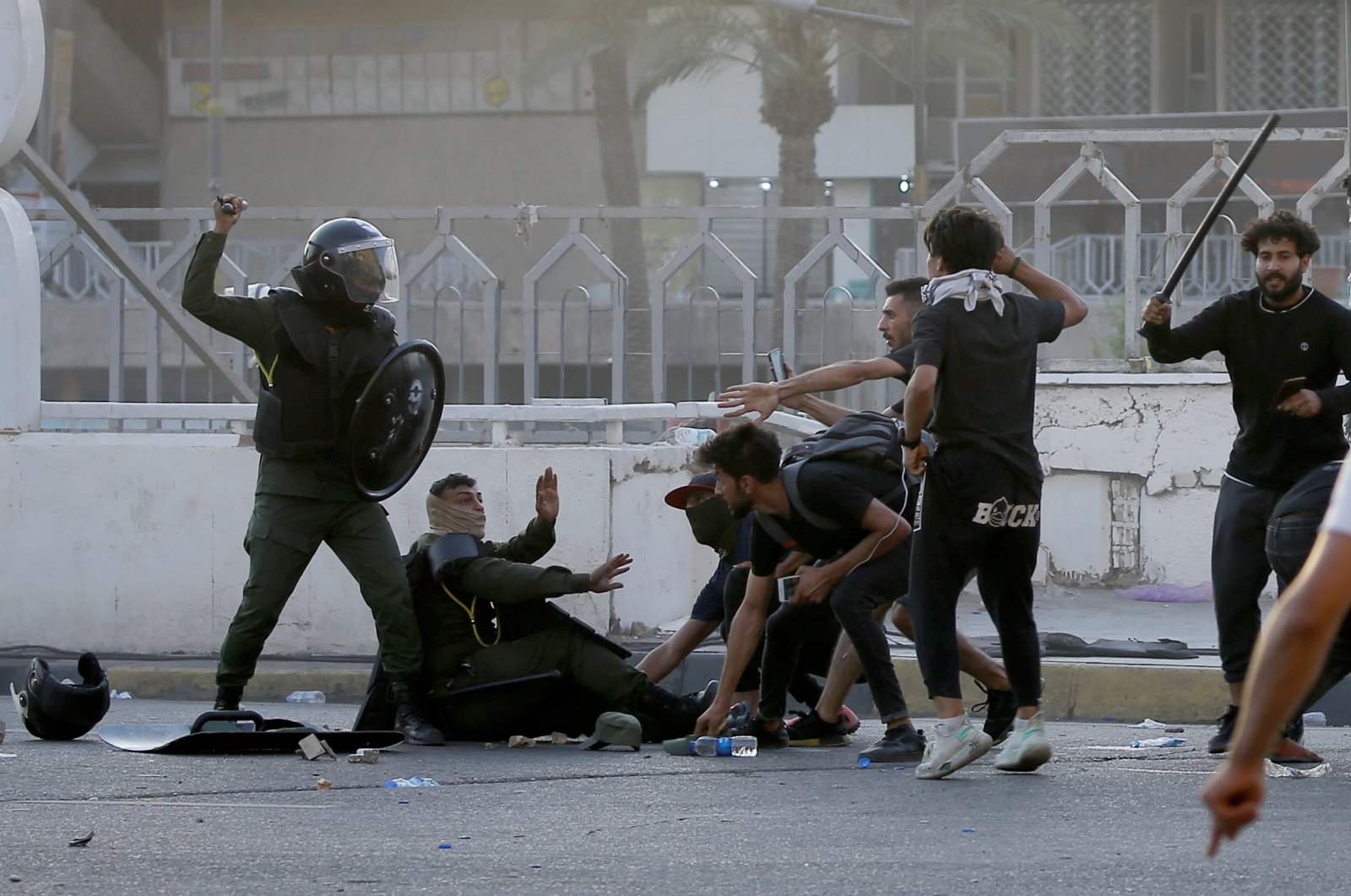 Members of security forces clash with demonstrators during an anti-government protest in Baghdad, Iraq, May 25, 2021. (Reuters Photo)
by French Press Agency - AFP May 25, 2021 9:34 pm
RECOMMENDED

One person died and several others were injured Tuesday after clashes erupted as thousands hit the streets of the Iraqi capital Baghdad to demand justice over a wave of killings of pro-democracy activists and journalists.

Medics and police said 14 demonstrators were injured when police fired tear gas to disperse them, while seven policemen were hurt by projectiles thrown at them during the operation.

Mohammad Baker from the southern town of Diwaniya died in al-Kindi hospital from a gunshot wound in the neck, a medical source said.

Waving portraits of victims, gunned down with silencers by unknown assailants, the demonstrators converged on the Iraqi capital's main squares including Tahrir, as police were deployed in force.

"Revolution against the parties," they chanted.

"Who killed me?" banners read.

Since the fall of dictator Saddam Hussein in the U.S.-led invasion of 2003, political parties have controlled life in Iraq and corruption has plagued state institutions.

Many in the crowds traveled from the southern cities of Karbala, Najaf and Nassiriya, where several of the killings occurred.

Anti-government campaigner Ihab al-Wazni was killed in the Shiite Muslim holy city of Karbala on May 9, a day before prominent journalist Ahmed Hassan was also shot in southern Iraq. He remains in a coma after undergoing brain surgery.

Killings, attempted murders and abductions have targeted more than 70 activists since a protest movement erupted against government corruption and incompetence in 2019.

Authorities have consistently failed to publicly identify or charge the perpetrators of the killings, which have not been claimed.

Elections have been set for October in response to a central demand of the protest movement.

But "anyone who runs in the elections as a free candidate not attached to a political party will be killed," 25-year-old demonstrator Hussein predicted grimly.

"These polls only aim to recycle the corrupt garbage."

President Barham Saleh said Sunday that $150 billion of stolen oil money had been smuggled out of Iraq since Saddam was ousted.

After Wazni's murder, a movement born out of the anti-government protests called al-Beit al-Watani – the National Bloc – said it would boycott the elections.

Since then, 17 groups have joined the call for a boycott.

Another protester in Baghdad, Mohammed, 22, played up a common distrust. "People have infiltrated the demonstration to take photos of us and kill activists once we leave," he said.