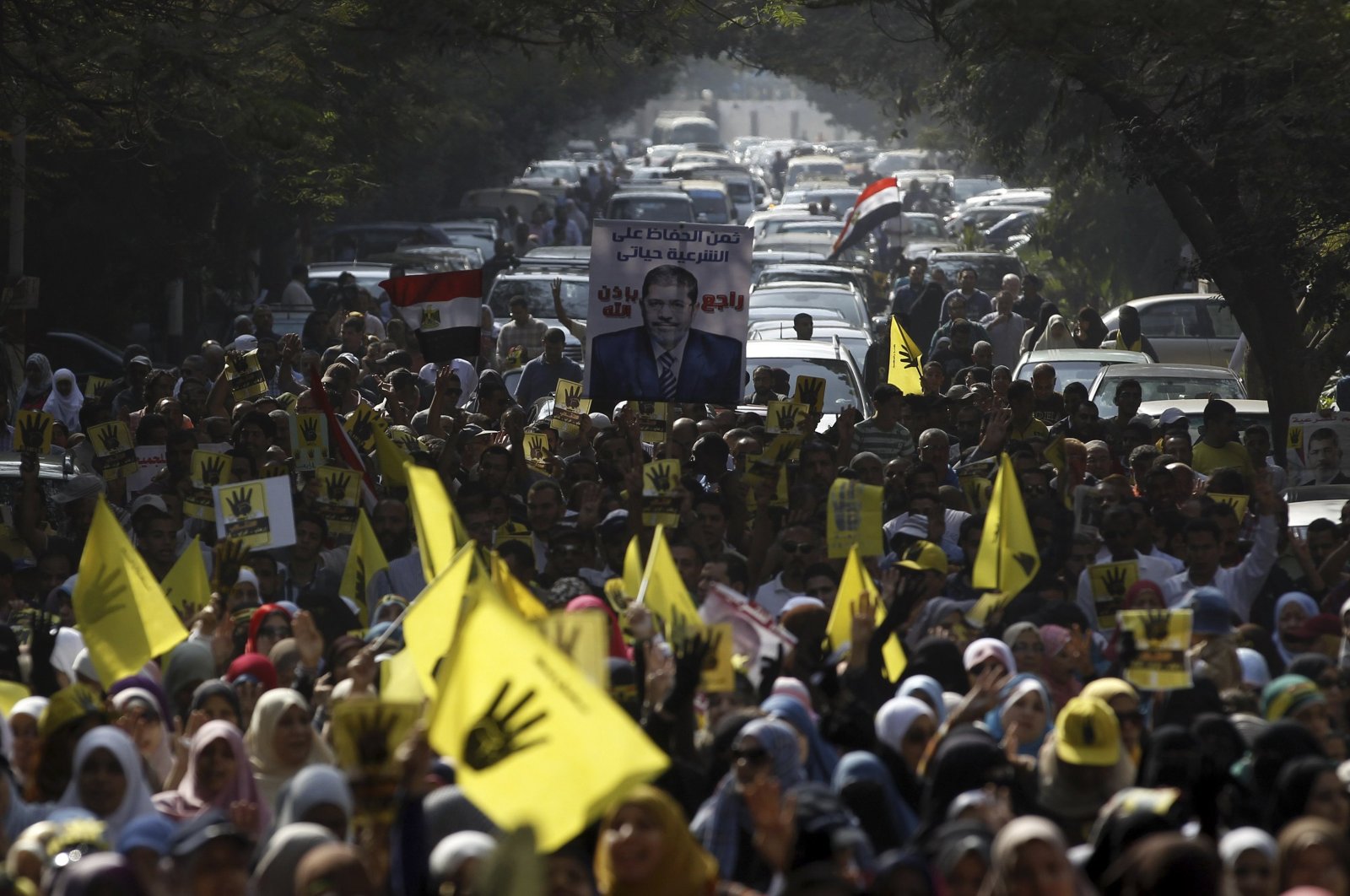 Supporters of the Muslim Brotherhood and Egyptian Mohammed Morsi take part in a protest against the military in Cairo November 1, 2013. (Reuters Photo)
by DAILY SABAH Aug 14, 2020 7:28 pm
RECOMMENDED

Seven years ago, on Aust. 14 Egyptian security forces killed more than 1,000 people who were protesting against the removal of the country’s first democratically elected President Mohammed Morsi at Cairo’s Rabaa Square.

The bloody event took place outside the Rabaa al-Adawiya Mosque in Cairo where members of the Muslim Brotherhood and Egyptian opposition had been protesting for 47 days after Morsi was overthrown by the military following mass demonstrations.

Egyptian security forces adopted a harsh stance against the protesters and shot indiscriminately into crowds trapped in mosques and in Rabaa square. Burnt alive, suffocated with tear gas demonstrators couldn't get any medical treatment as the army had blocked entrances to ambulances.

Since the coup, which took place on July 3, 2013, hundreds of Morsi supporters were sentenced to death while thousands were jailed. Moreover, thousands of Egyptians had to flee the country. The assets of the Muslim Brotherhood and its members were confiscated by the coup leaders.

The Muslim Brotherhood, which is the largest and the most organized social group in Egypt, was outlawed on the claim that it was a threat to national security.

During this time, the coup leader and current president, Abdel-Fattah el-Sissi accused Morsi of deteriorating the Egyptian economy, aiding Hamas, spying for certain countries and polarizing society. People who were against Morsi and the Muslim Brotherhood took to the streets at the end of June to protest the government.

After the protests started, the army sided with the protesters and gave an ultimatum to Morsi, saying he had to resign in two days' time. Morsi stressed that he had been elected and only another election could remove him. The army did not accept Morsi's argument.

While the tensions escalated in Cairo among different factions and the army, the people on the streets also expressed different demands. Sit-in protests to show solidarity with Morsi started even before the anti-Morsi protests. Despite the support of the masses, the army overthrew Morsi and his Cabinet, violating the constitution and universal democratic values.

Morsi and many other prominent political figures, who were either members of the Muslim Brotherhood or connected to it, were arrested. In 2019 Morsi died at the age of 67 in court during a trial.

The pro-Morsi and pro-democracy protesters did not leave the streets. They chanted slogans against el-Sissi and the coup. El-Sissi claimed that the protesters were threatening national security while making a call to his supporters to go to Tahrir Square.

The coup leader finally gave the order to clear Rabaa Square, which was the pro-Morsi protesters' main area, leading to the Rabaa massacre, making Aug. 14, 2013, one of the worst days in Egyptian history.

Despite international calls and warnings of rights groups, there has been no change in Egypt's policy towards this dark day. No step was taken to bring clarity around the incidents and to find the security forces who fired on innocent people.

On the contrary, hundreds of thousands have been jailed and several political parties, nongovernmental organizations (NGOs) and journalism associations have been shut down.

Egypt has been dragged into a chaotic and unstable situation, losing its significance in the realm of regional politics because of its increasing dependence on foreign aid.