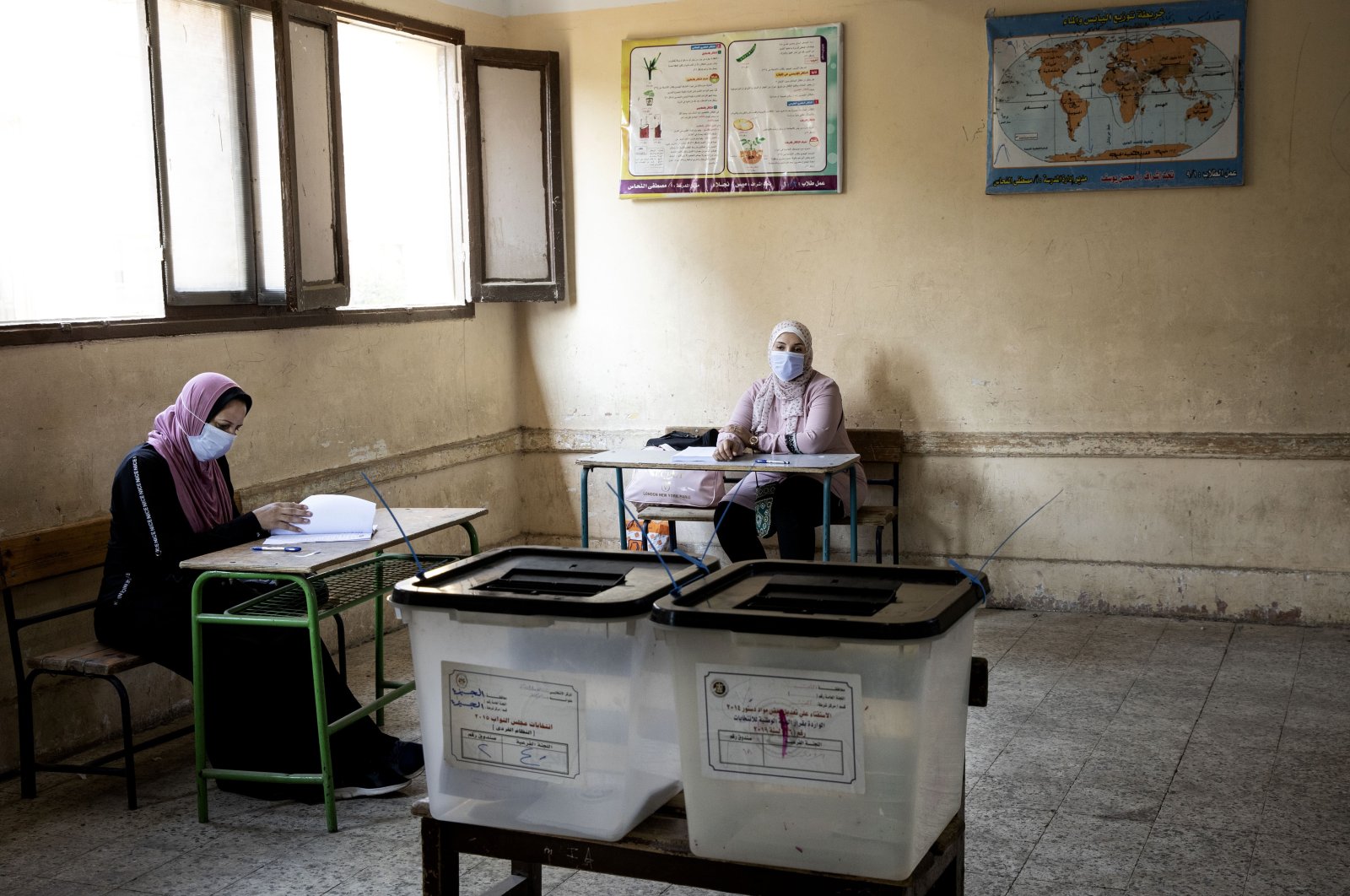 Election officials wait for people to vote on the first day of the Senate elections inside a polling station in Cairo, Egypt, Aug. 10, 2020. (AP Photo)
by ASSOCIATED PRESS Aug 11, 2020 11:33 am
RECOMMENDED

Egyptians started voting Tuesday for the Senate – the upper chamber of Parliament that was revived as part of constitutional amendments approved in a referendum last year – an election that comes as the country faces an uptick in daily numbers of coronavirus cases.

Authorities have said face masks would be handed out to voters for free and polling stations were disinfected ahead of the balloting to ease concerns amid the pandemic.

The vote is mostly a symbolic exercise as the Senate – unlike the House of Representatives, the lower chamber – has no legislative powers and will have mainly in an advisory role. It replaces the Shura Council, which was dissolved in 2014.

The balloting will extend for two days to allow for a maximum turnout as some 63 million voters are eligible to cast ballots. They will choose two-thirds of the 300-member Senate, with 787 candidates running for those 200 Senate seats. Egyptian expats abroad voted Sunday and Monday.

The first 100 seats in the running are reserved for individual candidates, the second for those running on a list dominated by pro-government parties. Egyptian President Abdel-Fattah el-Sissi will choose the remaining 100 members.

The results were expected within a week and the runoff will take place in September. Under the constitutional amendments approved in April last year, women will have a 25% quota in the chamber.

Lasheen Ibrahim, chairman of the National Election Authority, called voting “a national duty" and warned in televised comments Saturday that those who boycott the election could be fined up to 500 Egyptian pounds ($32), under an Egyptian law that has existed for years but was never really implemented.

For the past two weeks, Cairo and other cities and towns across the country have been awash with posters and banners of candidates, mostly pro-government businessmen and politicians.

The election comes despite an uptick in coronavirus cases this week, after the daily reported numbers dropped from around 1,500 to 112 on Aug. 4. However, the actual numbers of COVID-19 cases, like elsewhere in the world, are thought to be far higher, in part due to limited testing.

The Health Ministry on Monday reported 174 new cases of the virus and 26 deaths. Overall, the country of more than 100 million people has reported more than 95,600 confirmed cases, including 5,035 deaths – the highest number of fatalities in the Arab World, and the third in the Middle East, tailing Iran and Turkey, according to a tally by The Associated Press (AP).

Egypt's latest constitutional amendments extended a president’s term in office from four to six years, allowing for a maximum of two terms. But they also included a specific article extending el-Sissi's current second four-year term to six years and allowing him to run for another six-year term in 2024 – potentially extending his rule until 2030.

El-Sissi in 2013 led the military overthrow of Egypt's first democratically elected president, Mohammed Morsi. El-Sissi has since presided over an unprecedented crackdown on dissent.

Opposition voices have largely been shut out, and thousands of people, including many pro-democracy activists, have been arrested. Freedoms won in 2011, when mass protests ended President Hosni Mubarak’s nearly three-decade rule, have largely been rolled back.