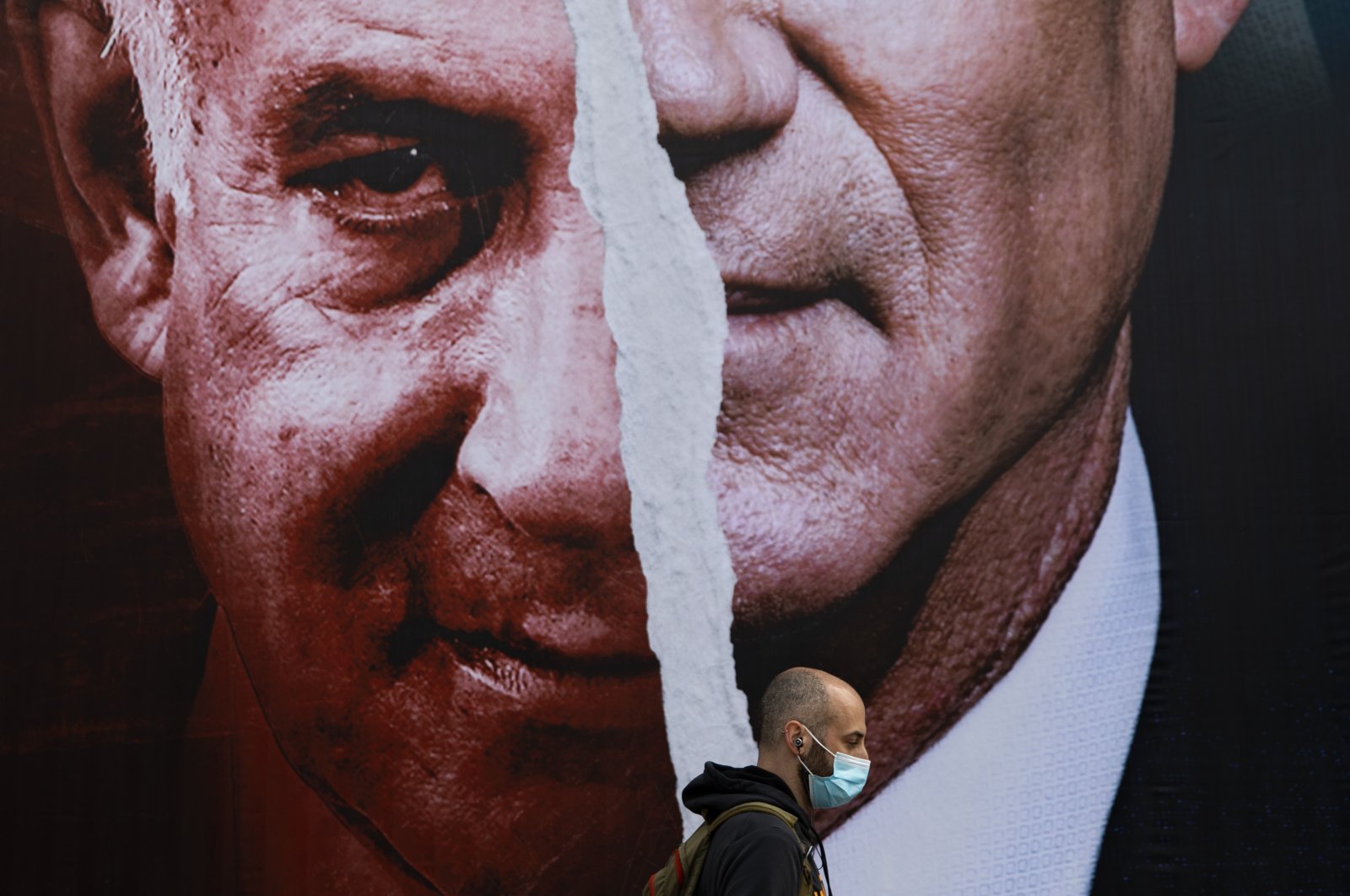 An election campaign billboard for Prime Minister Benjamin Netanyahu of the Likud party (L) and the opposition Blue and White party led by Benny Gantz (R) hangs on a street in Tel Aviv, Israel, March 11, 2021. (AP Photo)
by Associated Press Mar 23, 2021 9:00 am
RECOMMENDED

Israelis began voting on Tuesday in the country's fourth parliamentary election in two years, a highly charged referendum on the divisive rule of Prime Minister Benjamin Netanyahu. Public opinion polls forecast a tight race between those who support Israel's longest-serving premier and those who want "anyone but Bibi,” as he is widely known.

Facing an electorate worn down by a series of campaigns and the COVID-19 pandemic, candidates made their final push in recent days with a series of TV interviews and public appearances at shopping malls and outdoor marketplaces.

The campaigns increasingly reached into people's personal space with a constant barrage of get-out-and-vote texts that made cell phones ding and buzz at all hours.

Netanyahu has portrayed himself as a global statesman uniquely qualified to lead the country through its many security and diplomatic challenges. He has made Israel's successful coronavirus-vaccination campaign the centerpiece of his reelection bid and pointed to last year's diplomatic agreements with four Arab states.

Opponents accuse Netanyahu of bungling the management of the coronavirus pandemic for most of the past year. They say he failed to enforce lockdown restrictions on his ultra-Orthodox political allies, allowing the virus to spread, and point to the still-dire state of the economy and its double-digit unemployment rate. They also say Netanyahu is unfit to rule at a time when he is on trial for multiple corruption charges, a case he dismisses as a witch hunt.

Up to 15% of the electorate is expected to vote outside their home districts, a batch of absentee balloting that’s larger than usual to accommodate those with COVID-19 or in quarantine. The government is dispatching special polling stations, including vehicles, to provide places for them to vote safely.

Those votes are tallied separately in Jerusalem, meaning final results may not be known for days. Given the tight race, the large number of undecided voters and a number of small parties struggling to cross the 3.25% threshold for entry into parliament, it could be difficult to predict the outcome before the final count is complete.

Israelis vote for parties, not individual candidates. No single party list of candidates has been able to form a governing majority in Israel’s 72-year history. Netanyahu’s Likud party and those led by his rivals will be looking to smaller, allied parties as potential coalition partners.

The party that can cobble together a majority coalition gets to form the next government, a process that is expected to take weeks.

Tuesday’s election was triggered by the disintegration of an emergency government formed last May between Netanyahu and his chief rival to manage the coronavirus pandemic. The alliance was plagued by infighting, and elections were triggered by the government’s failure in December to agree on a budget.

Netanyahu is hoping to form a government with his traditional religious and hard-line nationalist allies. These include a pair of ultra-Orthodox parties and a small religious party that includes openly racist and homophobic candidates.

Netanyahu’s rivals have accused him of causing the past two years of paralysis in hopes of forming a more favorable government that would grant him immunity or protect him from prosecution. His challengers include Yair Lapid, Israel’s opposition leader whose Yesh Atid party has emerged as the main centrist alternative to Netanyahu.

Netanyahu also faces challenges from a number of onetime allies who have formed their own parties after bitter break-ups with the prime minister. They include former protege Gideon Saar, who broke away from Likud to form "New Hope.” He says the party is a nationalist alternative unburdened by corruption charges and what he says is a cult of personality that keeps Likud in power.

Yamina party leader Naftali Bennett, another former Netanyahu aide, could emerge as the kingmaker. A hard-line nationalist politician who was formerly Netanyahu’s education and defense minister, Bennett has not ruled out joining a coalition with the embattled prime minister, allowing him to court both sides in future coalition talks.

The personality politics have so overtaken the race that there’s been almost no mention of the Palestinians, after years of frozen peace talks. Analysts expect voter fatigue to contribute to lower turnout, which had been at 71% in the most recent election a year ago.

Netanyahu’s religious and nationalist allies tend to be highly motivated voters. In contrast, Arab voters, disappointed with the disintegration of the umbrella "Joint List” party, are expected to stay home in larger numbers this time. Voters in the more liberal and secular areas around Tel Aviv also tend to have lower rates of participation. Netanyahu could benefit if these trends materialize.

However, unlike last year’s elections, the prime minister is without one key ally, former President Donald Trump, whose support he leveraged in previous elections with massive billboards on highways and high-rises showing them together.

Biden called the prime minister only after reaching out to leaders of several other countries and Israel’s supporters began to complain that the delay smacked of a snub. The two men insist their alliance remains close.