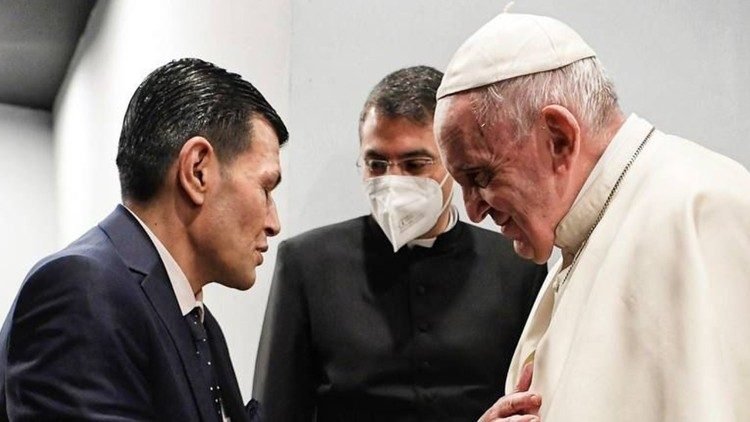 Abdullah Kurdi, the father of Syrian toddler Aylan Kurdi, whose body washed ashore on the beach of a Turkish resort town six years ago, meets with Pope Francis during his visit to Irbil, Iraq, March 7, 2021. (DHA Photo)
by Daily Sabah with AP Mar 09, 2021 1:57 pm
RECOMMENDED

The father of Syrian toddler Aylan Kurdi, who washed ashore on the beach of the Turkish resort town Bodrum, the most famous district in Turkey's Muğla province, shocking the world with heartbreaking photos of his tiny little body, brought Pope Francis to tears during a papal visit to Iraqi conflict-torn cities where he met Muslim and Christian leaders and preached peace and coexistence over war.

Abdullah Kurdi shared details of his meeting with the pope in the Iraqi city of Irbil with the Demirören News Agency (DHA).

Kurdi, a Syrian refugee, lost his wife and 3-year-old son after the boat carrying his family to the Greek island sank six years ago. He said he gave Pope Francis a painting of Aylan, in order to make people remember the tragic event.

"When I gave the painting as a gift to the pope, he was overwhelmed. I felt his tears would flow," Kurdi said. "I tried to change the subject because he is an old and great person, but I kept quiet, held my breath, tried to change the atmosphere so that it wouldn't be too upsetting," he added.

Pope Francis on Monday wrapped up his historic whirlwind tour of Iraq. The pontiff and his traveling delegation were seen off with a farewell ceremony at the Baghdad airport, from where he left for Rome following a four-day papal visit that covered five provinces across Iraq. As the pope's plane took off, Iraqi President Barham Salih was at hand on the tarmac, waving goodbye.

At every turn of his trip, Francis urged Iraqis to embrace diversity – from Najaf in the south, where he held a historic face-to-face meeting with powerful Shiite cleric Grand Ayatollah Ali al-Sistani. In Iraq's south, Francis convened a meeting of Iraqi religious leaders in the deserts near a symbol of the country’s ancient past – the 6,000-year-old ziggurat in the Plains of Ur, also thought to be the birthplace of Abraham, the biblical patriarch revered by Jews, Christians and Muslims. The gathering brought religious representatives across the country rarely seen together, from Muslims, Christians, Yazidis and Mandaeans.