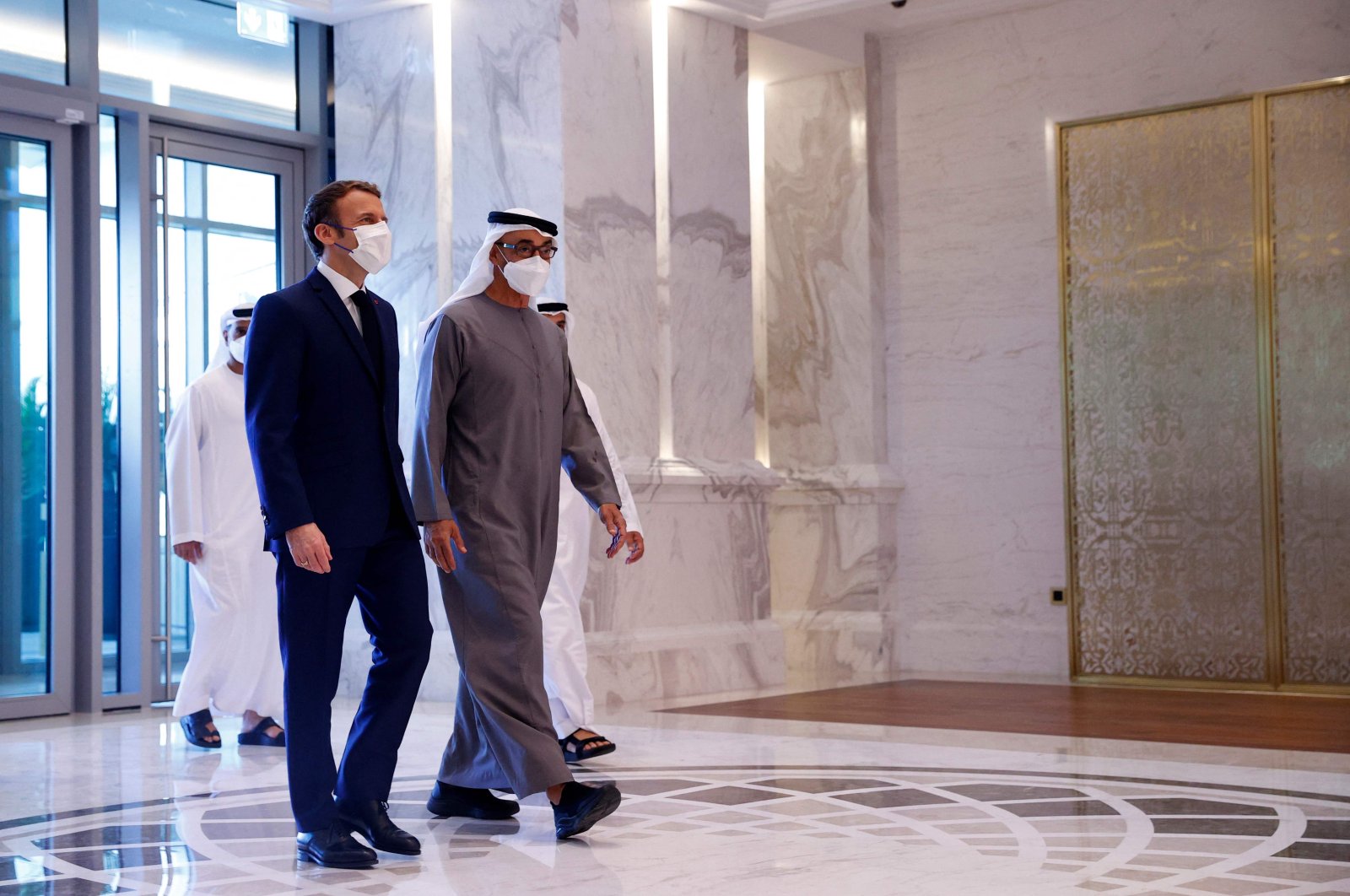 "This is an outcome of the strategic partnership between the two countries," a statement from the French presidency said, adding that the UAE also agreed to buy 12 Caracal helicopters. The Rafale order is the biggest made internationally for the aircraft since it entered into service in 2004.

Macron met Crown Prince Sheikh Mohammed bin Zayed Al Nahyan (MBZ) on Friday at the start of a two-day Gulf tour. He was greeted at the leadership pavilion at Dubai's Expo site.

The two-day visit to the UAE, Qatar and Saudi Arabia comes a month before France assumes the rotating European Union presidency – and ahead of the French 2022 presidential election where Macron is expected to seek a second term.

Returning from the Gulf with a contract to sell French fighter jets to the Emiratis, a deal that Paris and Abu Dhabi have discussed for almost a decade would boost France’s defense industry after the collapse of a $66 billion contract for Australia to buy 12 French submarines.

And the red carpet treatment Macron can expect from Gulf political heavyweights would present France as the EU powerhouse in the Gulf and Middle East since Britain’s exit from the bloc.

"Macron stands out among European Union leaders with his willingness to be in the spotlight, to drive the foreign policy and push things ahead,” said Silvia Colombo, an expert on EU-Gulf relations at the International Affairs Institute in Rome.

But, primarily, Macron is pursuing French business interests, Colombo said. "He has a very clear idea that he has to go where the business community wants to be, where France can make economic gains.”

Macron’s keen interest in forging personal relationships with leaders like MBZ and his counterpart in Saudi Arabia, Crown Prince Mohammed bin Salman (MBS), makes him a welcome guest. Both Gulf leaders value a degree of pragmatism when discussing democracy and human rights – issues on which their countries have been heavily criticized by rights groups and European lawmakers – while pursuing business opportunities.

By snapping up the Rafales, built by Dassault Aviation, the UAE is following the lead of Gulf rival Qatar, which has bought 36 of the planes, and Egypt which ordered 24 in 2015 and 30 earlier this year. The F4 model planes, which are still undergoing a two-billion-euro development program scheduled to be completed in 2024, will be delivered from 2027. The order to replace the UAE's 60 Mirage 2000-9 jets bought in 1998 comes 10 years after failed negotiations held by former French president Nicolas Sarkozy.

Rafale has since made a breakthrough on the international market despite competition from American and other European manufacturers. It now has six foreign clients including Qatar, India, Egypt, Greece and Croatia. The Emirates was already the fifth biggest customer for the French defense industry with 4.7 billion euros from 2011-2020, according to a parliamentary report.

France has deep ties to the UAE, a federation of seven sheikdoms on the Arabian Peninsula, particularly since the Sept. 11, 2001 attacks. The UAE opened a French naval base in 2009 at Abu Dhabi’s Port Zayed. French warplanes and personnel are also stationed at Al-Dhafra Air Base, a major facility outside the Emirati capital of Abu Dhabi that’s also home to several thousand American troops.

Months after Macron was elected in 2017, he traveled to the UAE to inaugurate Louvre Abu Dhabi, built under a $1.2 billion agreement to share the name and art of the world-famous museum in Paris.

In September, Macron hosted Abu Dhabi's crown prince at the historic Chateau de Fontainebleau outside Paris, which was restored in 2019 with a UAE donation of 10 million euros ($11.3 million).

The UAE and France have also become increasingly aligned over a shared mistrust of some political parties across the Middle East, and backed the same side in Libya's civil strife.

A senior French presidency official who spoke to reporters ahead of the trip on customary condition of anonymity said Macron will "continue to push and support the efforts that contribute to the stability of the region, from the Mediterranean to the Gulf.”

Gulf tensions will be discussed, the official said, in particular the revived talks about Iran’s nuclear deal with world powers, following the U.S. withdrawal from the agreement by President Donald Trump. Gulf countries have long been concerned by Iran’s nuclear ambitions and influence across the region, particularly in Iraq, Syria and Lebanon.

"This is a hot topic,” the French official said, adding that Macron discussed the issues in a phone call Monday with Iran's President Ebrahim Raisi. He will talk about the call and the issues – including the nuclear deal talks in Vienna – with Gulf leaders, who are "directly concerned by this subject, like all of us but also because they are (Iran’s) neighbors,” the official said.

France, along with Germany and the U.K., thinks the 2015 nuclear agreement – with minor tweaks – is the way forward with Iran, analysts say. The UAE and Saudi Arabia have bitterly opposed the West’s negotiated deal with Iran.

"Although the Gulf countries did not like the West’s deal with Iran, the prospect of it falling apart acrimoniously is also bad for them and arguably presents worse risks,” said Jane Kinninmont, a London-based Gulf expert with the European Leadership Network think tank.

"Their view has always been the West should have gotten more out of Iran before sealing the deal,” Kinninmont said, as The Associated Press (AP) reported. "But if the West walks away with nothing, the Gulf countries are beginning to understand that their security will not improve as a result.”