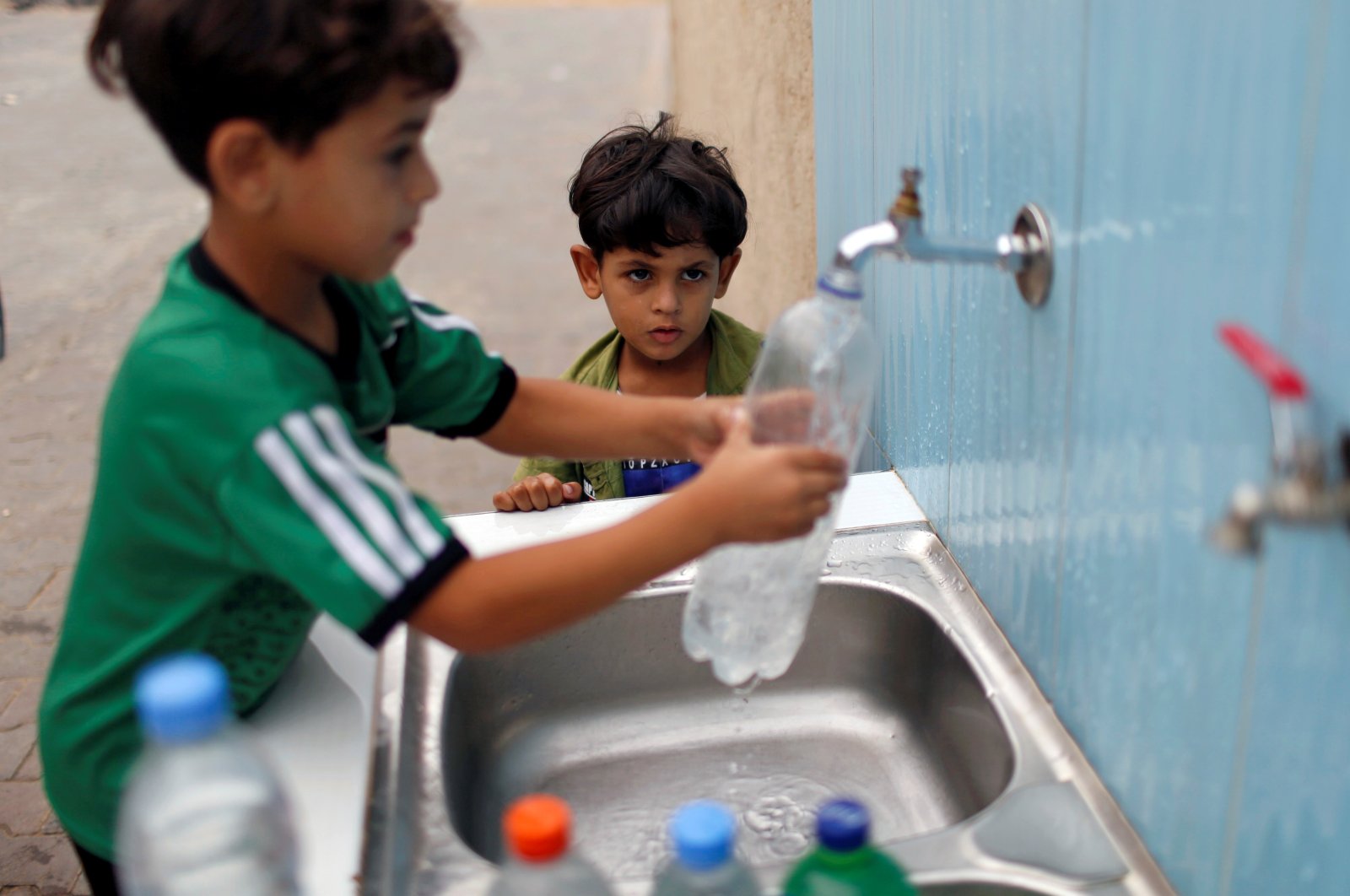 Palestinian boys fill bottles with water at a public tap during a lockdown amid the coronavirus outbreak, in Jabalia refugee camp in the northern Gaza Strip, Palestine, Sept. 10, 2020. (Reuters Photo)
by Emre Başaran Sep 10, 2020 12:48 pm

Palestinians living in the Gaza Strip do their best to keep COVID-19 numbers low while struggling against an even more brutal enemy: the illegal Israeli blockade

Nearly every human being on Earth has felt the impact of the ongoing coronavirus pandemic. No one has been spared from the threat of being infected, falling ill or even dying.

But in Gaza, the situation is even worse.

Gazans also feel the threat of being infected and falling critically ill, especially considering the meager health infrastructure in the enclave. For them, the possibility of death is very real due to Gaza’s nearly nonexistent health system.

Another factor that has already been holding Gazans captive for over a decade adds fuel to the fire burning inside the strip: the Israeli blockade that is regarded by nearly all the world as 100% illegal under international law. But Israel, of course, does not care about the law when it comes to oppression.

Sahar Atrache, the senior advocate for the Middle East at humanitarian watchdog Refugees International, sat for an interview with Daily Sabah regarding the current issues Gazans are facing.

“Until late August, there were only 100 or so cases in Gaza, most of whom were returnees from either Egypt or through the Erez crossing from Israel. And all people coming from outside Gaza were quarantined. But from Aug. 24 onward, the first cases of local transmission happened, with four members of the same family being infected,” she said.

“That’s when the situation started getting out of control. Between Aug. 24 and today, we have seen a drastic increase in cases. We have recorded more than 1,200 cases so far. Today, I think the actual number is near 1,300 cases, only in Gaza,” Atrache stated.

“The situation is really getting worse by the day. Gaza has been under a blockade for nearly 14 years now,” she said.

The blockade of Gaza by Israeli authorities, which allegedly is enforced over security concerns, is illegal under international law.

“Until Aug. 6, until the Qatari mediation, Israel was bombing Gaza almost every day. The situation in Gaza is very unstable,” Atrache underlined.

“Israel also forced the only power plant to shut down. There was a risk of hospitals shutting down,” she said.

Atrache also mentioned statements by World Health Organization (WHO) officials regarding the COVID-19 situation in the blockaded enclave.

“WHO officials previously said that they could deal with hundreds of cases but not with thousands. But now, the number of cases is approaching 1,500 cases,” she said.

According to data from Johns Hopkins University’s Coronavirus Resource Center, the number of cases in Palestine’s West Bank and Gaza, both under either illegal occupation or blockade by Israel, totaled 27,919 as of Thursday, while 192 people have died due to the coronavirus.

“People are struggling with the rising number of cases in Gaza. It is one of the most densely populated areas in the world,” Atrache said.

On the other hand, Israel has risen to be ranked fifth in the world for the number of infections per capita over the past weeks. The rate is specifically high among ultra-Orthodox Jews and Israel’s Arab communities, where case numbers have been notably high and adherence to health protocols patchy. The government’s inadequate response to the crisis have led to protests and criticism targeting Prime Minister Benjamin Netanyahu.

Over 1.85 million Gazans live in an area of a mere 365 square kilometers (140 square miles), making it one of the most densely populated areas in the world. The blockaded enclave is home to over 5,046 people per square kilometer.

“Nearly 80% of the population in Gaza needs humanitarian aid,” Atrache said. “Now with the pandemic, the global situation has affected Gaza significantly."

“I talked to a health official in Gaza and asked him if it was possible to contain the pandemic in Gaza. He told me that the situation is already out of control,” Atrache warned.

I told Atrache that the situation in Gaza is something that people like us, who live in relatively comfortable atmospheres, cannot even grasp.

“Citing some militants’ actions, Israel cut off its border crossing with Gaza. It applies collective punishment against the people of Gaza,” she added.

“The whole population is suffering. If you talk to people in Gaza, they will tell you that the power cuts can total 16 to 20 hours every day. They can only have electricity for three or four hours a day,” Atrache said.

Atrache also said that Israel also hinders the transport of construction materials to Gaza, effectively cutting off their chance of improving the city through development.

“The blockade, the movement restriction imposed upon people by Israel, the lack of funding all added fuel to the ongoing crisis,” she added.

“Even before COVID-19, people with Crohn’s disease or worse health complications had to seek medical attention outside of Gaza, either in Israel or the West Bank. Due to the exit permit system and the blockade, they could not have the treatment they needed,” Atrache underlined.

Atrache also criticized the Egyptian government’s restrictions on the people of Gaza.

“Due to the highly restricted movement of Gazans, doctors or other health professionals cannot easily go to Egypt or other countries to attend a seminar for example. It usually takes at least three to four days just to cross the Rafah crossing with Egypt. So people are discouraged against pursuing better training,” Atrache explained.

The official also underlined the grave situation of Gazans trying to pursue an academic career.

“People graduate but they have no opportunities afterward, and they have no prospect of hope for the future,” she said.

“If you are a Gazan and need to develop your knowledge, you will need to go outside the enclave and attend conferences, trainings and so on. Especially health professionals, doctors, nurses and other people need to attend better training,” Atrache added, stating that the heavy restrictions on the movement of Gazan people and the Israeli blockade make that very difficult, if not impossible.

“I cannot say that some health workers in Gaza are not qualified enough, but they need extra training to treat more complicated diseases,” she said.

Atrache mentioned a colleague of hers, who was blocked by Israeli and Egyptian authorities from attending training.

“He needed to attend training, and he applied to go to Egypt. The process to cross the Rafah crossing took over 36 hours, and by the time he arrived, he had already missed it,” she said.