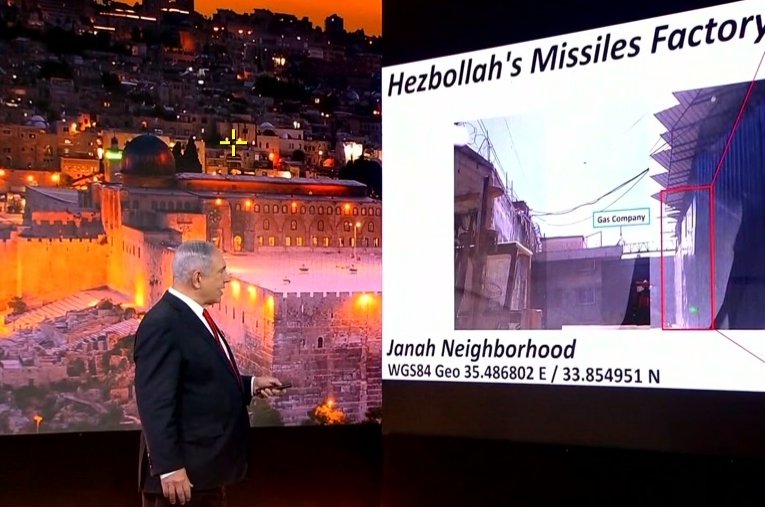 Israeli Prime Minister Benjamin Netanyahu addresses from Jerusalem a virtual meeting of the annual U.N. General Assembly in which he pointed out an alleged weapons depot located in the Lebanese capital Beirut, Sept. 29, 2020. (AFP Photo)
by Agencies
Sep 30, 2020 11:54 am

Hassan Nasrallah, the leader of the pro-Iranian Hezbollah, on Tuesday accused Israeli Prime Minister Benjamin Netanyahu of lying about the location of an arms depot and a missile factory in the capital Beirut.

"We will allow the media to enter the facility that Netanyahu talked about so the world finds out he is lying," Nasrallah said in a televised speech an hour after Netanyahu spoke. He accused the Israeli premier of trying "to incite" the Lebanese against Hezbollah. "We know very well where to put our missiles," the Hezbollah chief said.

According to Netanyahu, the missile depot located in the Jnah neighborhood was "where the next explosion could take place."

Lebanon has been pushed to the breaking point by a financial meltdown and a massive August blast at the Port of Beirut that killed nearly 200 people. Authorities have said highly explosive ammonium nitrate detonated after being kept in poor storage for years. Hezbollah has denied any involvement.

"I say to the people of Jnah ... You've got to protest this. Because if this thing explodes, it's another tragedy," Netanyahu said, speaking in a video to the U.N. General Assembly, prerecorded due to the coronavirus pandemic. "Iran and Hezbollah have deliberately put you and your families in grave danger ... You should tell them, tear these depots down." A photo displayed by Netanyahu during his speech, purporting to show the entrance to a missile factory, was taken on the ground in Beirut, suggesting an Israeli intelligence asset provided it.

Israel has repeatedly accused the Shiite movement backed by Israel's archfoe Iran of building missiles to attack the Jewish state. Israel and Hezbollah last fought a war in 2006, and tensions on the Israel-Lebanon border have been running high after the Shiite movement said one of its members was killed in an apparent Israeli airstrike in July in Syria. In August, the Israeli military struck what it said were Hezbollah posts after shots were fired at troops in Israel, which Nasrallah denied. He said Hezbollah would not be drawn into clashes that would “waste the blood of our martyrs and our equation.”

After two Hezbollah members were killed in Damascus in 2019, Nasrallah vowed the group would respond if Israel killed any more Hezbollah fighters inside Syria, where they deployed as part of Iranian-backed efforts to support Bashar Assad in a war that spiraled out of 2011 anti-government protests.