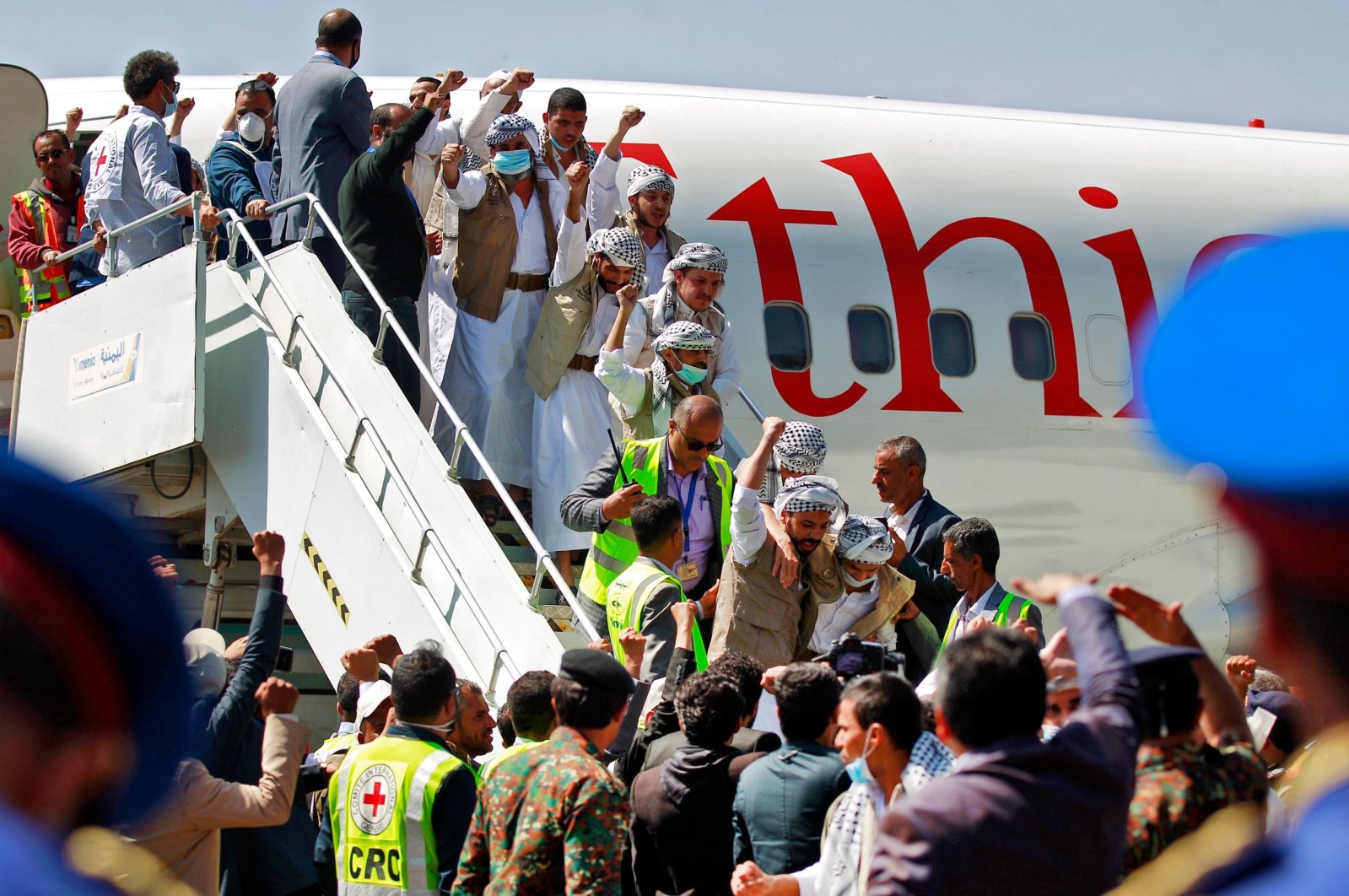 Freed Yemeni Houthi prisoners wave to the crowd as they descend the stairs of the plane that transported them after being released as the war-torn country began swapping 1,000 prisoners in a complex operation overseen by the International Committee of the Red Cross, Sanaa, Yemen, Oct. 15, 2020. (AFP Photo)
by Agencies Oct 15, 2020 3:49 pm
RECOMMENDED

Yemen's warring sides on Thursday kicked off a long-awaited prisoner exchange, a day after the country's Iran-backed rebels freed two Americans and released the remains of a third who had died in captivity.

Last month, the United Nations announced that the Houthis and Saudi-led military coalition had agreed to exchange more than 1,000 prisoners, marking the first phase of a prisoner-release plan reached earlier this year.

It wasn't immediately clear if the swap was related to the freeing of the Americans the previous day but the timing of the events appeared significant.

The swap was being coordinated by the International Committee of the Red Cross (ICRC) in Yemen. Hundreds of Houthi politicians and military commanders lined up on the tarmac in Sanaa, where a red carpet was rolled out and a military band played.

Another two planes took off from Sanaa, one carrying freed Yemeni government prisoners and another carrying 15 Saudis and five Sudanese who had fought alongside government forces, the Houthi's Al-Masirah news channel reported.

The planes were heading for Seyun airport in southern Yemen and Abha airport in Saudi Arabia. Another plane carrying more Houthi rebels was still expected to arrive in Sanaa, the report said.

Meanwhile, the Saudi-owned Al-Arabiya TV aired live footage of freed Yemeni government prisoners disembarking their plane in Seyun airport in the eastern province of Hadramawt, which is controlled by forces loyal to Yemen’s Saudi-backed government.

Under the deal, part of trust-building measures aimed at reviving peace talks, the Iran-aligned Houthi group is to release around 400 people, including 15 Saudi soldiers and four Sudanese, while the coalition would free 681 Houthi fighters.

Yemen has been mired in conflict since the military intervention was launched on March 25, 2015, at the request of President Abed Rabbo Mansour Hadi, who was exiled by the Houthis from the capital Sanaa after it fell under the control of the Shiite militia on Sept. 21, 2014.

It was initially welcomed by many Yemenis, who hoped the Houthis' reign would end in a few weeks.

While the Arab coalition, government forces and other militias it backed have been able to retake some governorates mainly in the south, west and southwest, the Houthis still control most of the northern governorates such as Ibb, Dhamar, Amran and Raymah.

The southern port city of Aden has been Yemen's temporary capital after it was liberated by government forces with the support of the coalition in July 2015.

The Saudi-led military coalition launched a large number of airstrikes on Yemeni areas, some of which killed civilians, while others killed soldiers among the forces supported by the coalition.

In March this year, the Houthis claimed through their military spokesperson Yahya Saree that the coalition had launched more than 257,000 airstrikes on Yemen since the start of the intervention.

The five-year-old conflict, largely seen in the region as a proxy war between Saudi Arabia and its arch-foe Iran, has killed more than 100,000 people and unleashed a humanitarian crisis that has pushed millions to the verge of famine and forced thousands to seek shelter in displacement camps.