'I wish I would die’: Syrians tortured in Lebanon, report reveals 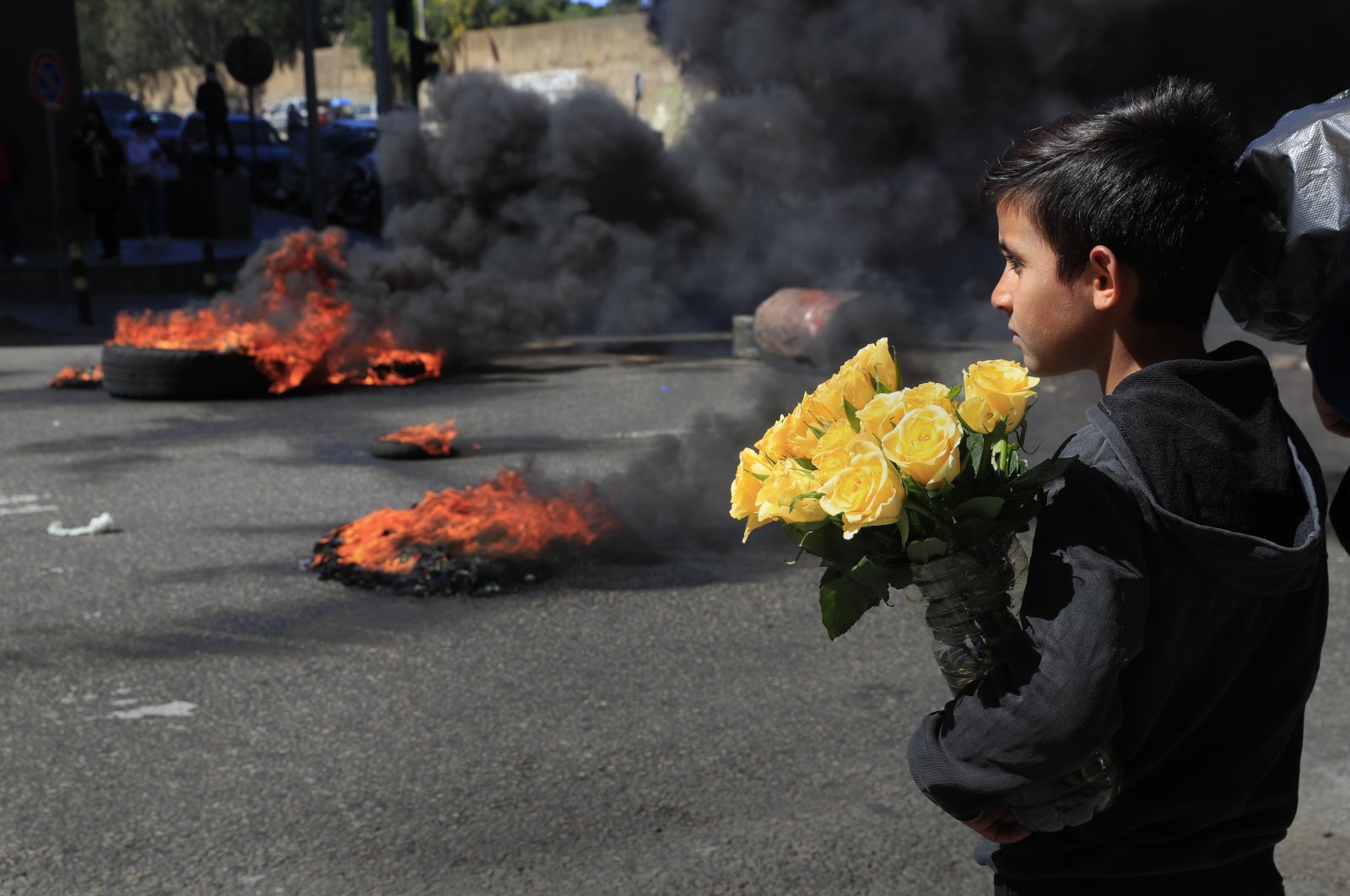 A Syrian boy selling flowers on the street watches protesters burn tires to block a main road during a protest against the increase in prices of consumer goods and the crash of the local currency, in Beirut, Lebanon, March 16, 2021. (AP Photo)
by Daily Sabah with AFP Mar 23, 2021 12:25 pm

Amnesty International accused Lebanese authorities of 'cruel and abusive' treatment of 26 Syrians, including minors, asserting that after being arrested on terrorism-related charges the detainees were tortured in prison or during interrogation

A new report by Amnesty International on Tuesday accused Lebanese authorities of "cruel and abusive" treatment of more than 20 Syrians it said had been tortured in prison or during interrogation.

In a report called "I wish I would die," the rights group documents the cases of 26 Syrians, including four minors and two women, imprisoned between 2014 and 2021 on suspicion of terrorism-related charges. Sentences varied from a few months to several years, with at least six men still detained, Amnesty said.

"In all but one of the 26 cases documented by Amnesty International, refugees reported being tortured, either during interrogation or detention," it said in the report.

Two of the survivors were 15 and 16 years old at the time. At least four men said they were beaten so badly that they passed out and two had their teeth knocked out, the report said.

According to detainees they encountered some of the same torture methods commonly used in Syrian prisons, such as “flying carpet” (tied to a folding board), “shabeh” (where a person is hung by the wrists and is beaten) or “balango,” in which a person is suspended for several hours with their wrists tied behind their back.

A former Syrian prisoner Bassel told Amnesty after being moved to Rihaniyyeh prison he was beaten so severely every day for three weeks that his wounds festered.

The arrests, starting in 2014, came as violence across the border in Syria spilled over into Lebanon. That year, the terrorist groups Daesh and al-Qaida's then-Syria affiliate, al-Nusra Front, kidnapped several Lebanese soldiers and police in a raid on the border town of Arsal.

The army and the powerful Shiite Hezbollah movement reacted with an operation targeting extremist hideouts on the outskirts of the town.

Amnesty acknowledged that "members of armed groups" must be held to account, but warned against flagrant violations committed against those arbitrarily detained.

The statement said that all 26 detainees were denied access to a lawyer during the initial interrogation, in violation of Lebanon's own laws, as well as international law and standards. Twenty-three survivors, two of whom are children, have been brought before military tribunals, in violation of international standards for trials of civilians in military courts.

In at least 14 of the 26 cases, Amnesty found that terrorism-related accusations against Syrian refugees were made on discriminatory grounds, including political affiliations.

"In nine cases, simply expressing political opposition to the Syrian government was considered evidence to justify convictions on 'terrorism' charges," it said.

At least 14 detainees said they had confessed to crimes they did not commit after being tortured or threatened, Amnesty added.

"Lebanese authorities' flagrant violation of Syrian refugees' right to due process has made a mockery of justice," said Amnesty researcher Marie Forestier "At every stage, from arrest through to interrogation, detention and prosecution in unfair trials, Lebanese authorities have utterly disregarded international human rights law."

Lebanon says it hosts 1.5 million Syrians – nearly a million of whom are registered as refugees with the United Nations. Nine out of 10 Syrians in Lebanon live in extreme poverty, the U.N. says. Lebanese authorities have systematically pressured Syrians to return even though rights groups warn that Syria is not yet safe.

Since 2011, millions of people have left Syria to seek refuge abroad. Lebanon is currently home to 1.5 million Syrian refugees, including almost 880,000 people registered with the United Nations High Commissioner for Refugees (UNHCR). In 2014, Lebanon closed its borders to refugees from Syria, and more than six months later the UNHCR terminated their registration at the request of the Lebanese government.

The 2019 economic and financial crisis, restrictions imposed to contain the spread of COVID-19, and a massive explosion in the port area of ​​Beirut in August 2020 has had a devastating impact on people's lives in Lebanon, including Syrian refugees. Rising unemployment, the collapse of the Lebanese currency and the subsequent rise in prices, including for essential goods, have led to an increase in hunger and poverty.

According to the UNHCR, 89% of Syrian refugee families were in extreme poverty in Lebanon in 2020. The vast majority of them struggled to obtain a valid residence visa and faced difficulties in finding safe accommodation. Access to the labor market and services such as education and health care was another challenge for Syrians in Lebanon. Only 20% of Syrians over the age of 15 have permanent residence documents.

The report said that refugees without legal migration status are at risk of detention and harassment, and face barriers to accessing basic services and registering births and marriages. The Lebanese government has introduced restrictive policies that negatively affect the rights of refugees, including limiting their employment to three sectors – agriculture, construction and cleaning. Lebanese authorities frequently raid camps and control checkpoints, leading to mass arrests of male refugees, in most cases for lack of residence documents or on unfounded terrorism-related charges. These arrests created an atmosphere of fear and intimidation.

In March 2020, during a quarantine imposed to contain the spread of COVID-19, some municipalities adopted discriminatory measures that further restrict the movement of Syrians, in some cases barring them from entering or living in certain cities.