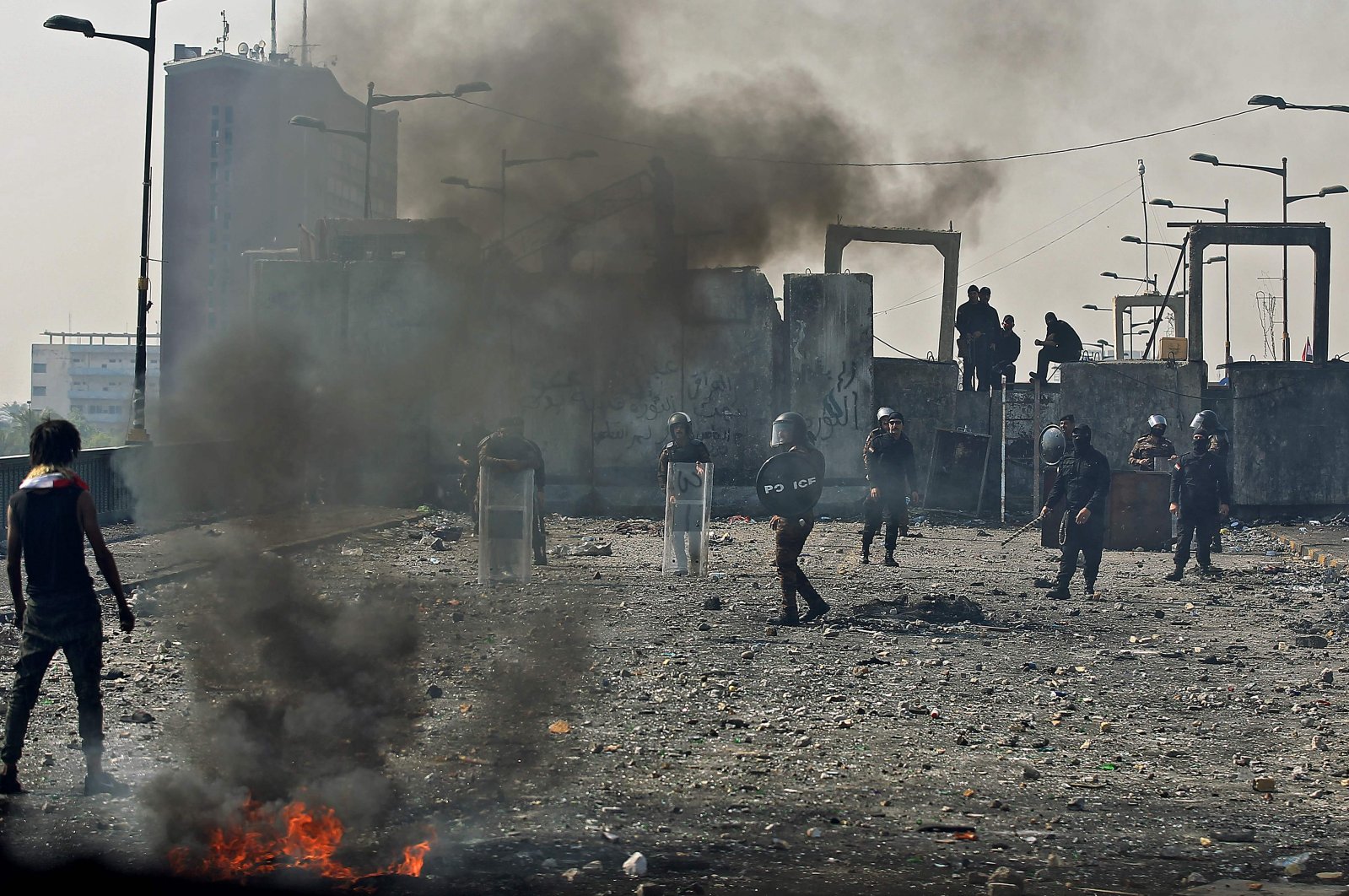 Iraqi riot police advance amid clashes with anti-government protesters on Al-Jumhuriyah bridge across the Tigris River leading to the highly fortified Green Zone, in the capital Baghdad, on Oct. 26, 2020. (AFP Photo)
by Agencies
Oct 25, 2020 2:26 pm

Dozens of Iraqi protesters again clashed with security forces in Baghdad Monday, a day after a rally marked the first anniversary of a revolt against a political system failing to deliver basic services and against the growing influence of pro-Iran militias.

Police fired stun grenades and tear gas at protesters who were burning tires and hurling rocks on the strategic Jumhuriyah bridge across the Tigris River leading to the highly fortified Green Zone, an Agence France-Presse (AFP) photographer reported.

The bridge, barricaded by towering concrete walls, separates the Green Zone from Tahrir Square, the epicenter of the old and new demonstrations.

The highly secure Green Zone, where government offices, parliament and the U.S. embassy are located, is off-limits to ordinary Iraqi citizens.

In a repeat of last year's demonstrations, rallies were also held in Shiite Muslim-dominated southern towns and cities.

Overnight in the shrine city of Karbala – which was a hub of demonstrations last year – protesters skirmished with riot police who eventually fired live bullets into the air to disperse them. Prime Minister Mustafa al-Kadhemi, who has been in power for six months, has urged security forces to show restraint when confronting protesters.

In Diwaniyah, young demonstrators set tires on fire while in Nasiriyah, also in the south, as night fell Sunday protesters in the main square sung the national anthem amid celebratory fireworks.

Anti-government protests that erupted in Iraq in October 2019 lasted several months before being crushed, at a cost of nearly 600 lives and 30,000 wounded. The mobilization kept up the protest movement's key demand for the ouster of the entire ruling class accused of corruption and being beholden to neighboring Iran.

Thousands of Iraqis took to the streets nationwide on Sunday to mark the first anniversary of the 2019 revolt dubbed the "October Revolution," which demanded the ouster of the entire ruling class, accused of corruption and being beholden to neighboring Iran. About 600 protesters were killed and 30,000 wounded in protest-related violence nationwide before demonstrations eased off and then ended with the coronavirus pandemic.

A campaign of targeted assassinations of leading figures of the revolt followed, with the United Nations pinning responsibility on militias. The burgeoning protests helped usher in al-Kadhimi in May, but he has yet to deliver on any major reforms.

A World Bank report says one in three young people is unemployed in Iraq. With lifeline oil prices plummeting, the knock-on effect has been brutal for the average Iraqi, with salaries delayed and basic services sorely lacking.

In his address to the nation, al-Kadhimi said parliamentary elections now scheduled for June 2021, brought forward partly in response to protesters' demands, would go ahead. Iraq's parliament is stacked with pro-Iran blocs resistant to tangible political reforms, as the debate on a new electoral law is held up. Armed pro-Iran factions have accused protesters of being "agents" of the U.S. "occupier."