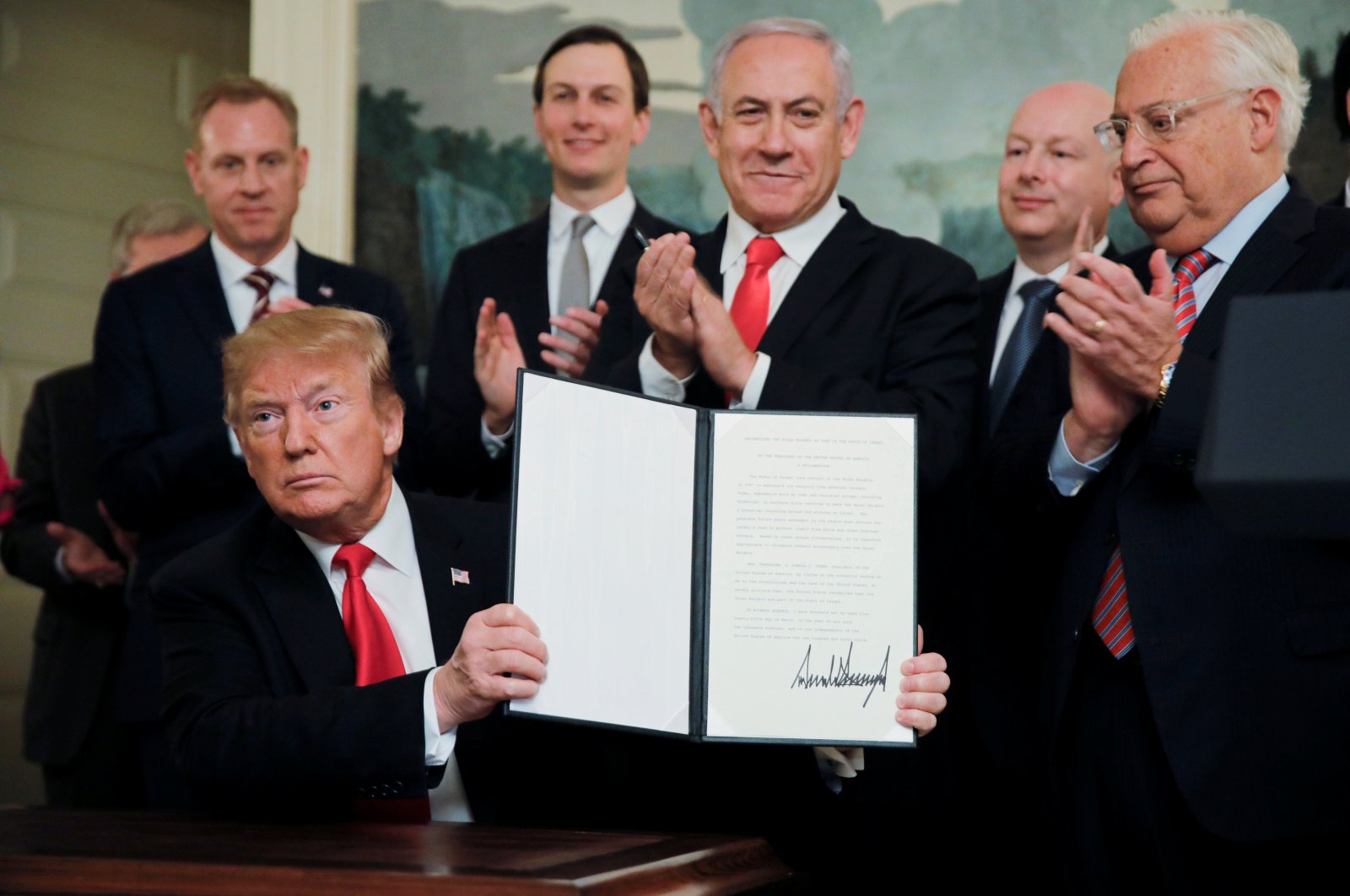 U.S. President Donald Trump holds a proclamation recognizing Israel's sovereignty over the Golan Heights as he is applauded by Israel's Prime Minister Benjamin Netanyahu and others during a ceremony at the White House in Washington, D.C., U.S., March 25, 2019. (Reuters Photo)
by ASSOCIATED PRESS Jun 14, 2020 10:38 pm
RECOMMENDED

Settlements Minister Tzipi Hotovely wrote on Facebook that her ministry will start preparations for Ramat Trump – Hebrew for “Trump Heights” – to house 300 families.

Israel captured the Golan Heights from Syria in the 1967 Mideast war and annexed it in 1981. Most of the international community considers the move, and Israeli settlements in the territory, illegal under international law.

But Trump signed an executive order recognizing the strategic mountainous plateau as Israeli territory in March 2019. The move came during a visit to Washington by Israeli Prime Minister Benjamin Netanyahu just weeks before Israeli elections. The decision, just one of several diplomatic moves benefiting Israel, was widely condemned in the international community.

The Israeli government's approval of the plan, which according to Israeli media will involve earmarking 8 million shekels ($2.3 million) for developing the town, advances a project announced by Netanyahu last year with great pomp and fanfare.

Last June, Netanyahu convened his Cabinet in the small hamlet of Qela for a vote on rebranding the community as a gesture of appreciation for the president’s recognition of Israeli sovereignty over the Golan Heights.

The small town of Qela is home to under 300 people. Its original neighborhood of Bruchim, which will be rebranded as Trump Heights, is home to less than a dozen.

At a Cabinet meeting on Sunday, Netanyahu said that Israel would "begin practical steps in establishing the community of Ramat Trump on the Golan Heights, Israel’s sovereignty over which was recognized by President Trump.”

Israel has built dozens of settlements in the Golan over the years, with an estimated 26,000 Jewish settlers living there as of 2019. Roughly the same number of Arabs live there, most of them members of the Druze sect of Shiite Islam.