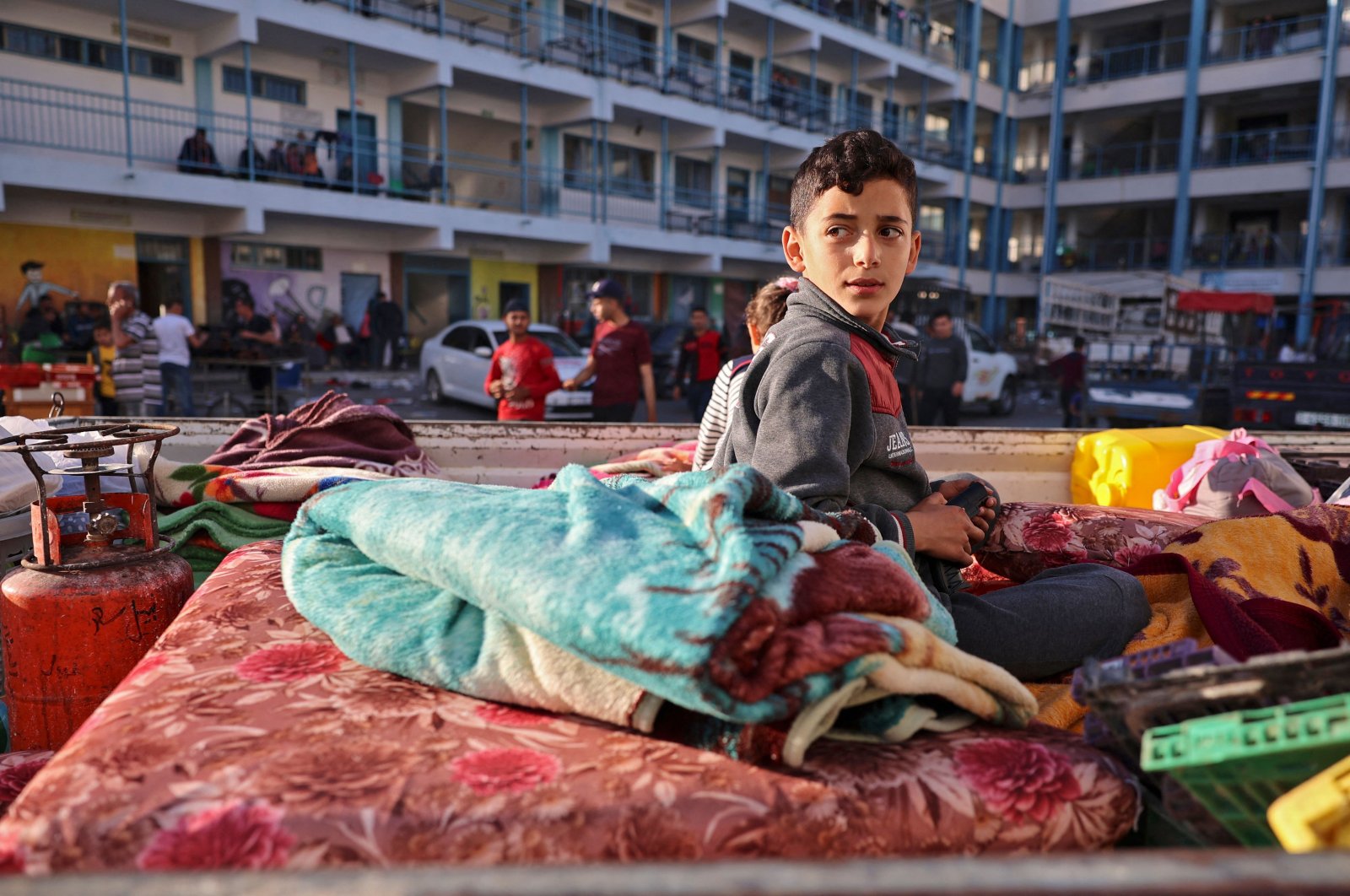 A Palestinian boy who fled his home due to Israeli air and artillery strikes sits on a mattress outside a school hosting refugees in Gaza City, Palestine, May 14, 2021. (AFP Photo)
by Anadolu Agency May 15, 2021 12:23 am
RECOMMENDED

A total of 34 children, the youngest of whom was a 5-month-old baby, have been killed in Israel’s attacks on the Gaza Strip since Monday.

Palestine’s Health Ministry confirmed that at least 34 children were killed and the youngest of them was a 5-month-old infant.

On May 10, 15-year-old Mohammad Saber Ibrahim Suleiman and his father were killed instantly by an Israeli drone-fired missile while they were working on their agricultural land outside the city of Jabalia. Doctors at a hospital in Jabalia, where Mohammad’s body was transferred, reported that there were shrapnel wounds all over his body.

In a subsequent incident, a rocket – a source of which is still unknown – killed eight Palestinians, including two children. Sixteen-year-old Mustafa Mohammad Mahmoud Obaid was killed in the blast and 5-year-old Baraa Wisam Ahmad al-Gharabli succumbed to his wounds later in the day.

A third blast in Beit Hanoun on the northeast edge of the Gaza Strip that occurred the same day killed six Palestinian children as well as two adults.

Cousins 10-year-old Rahaf Mohammad Attalla Al-Masri and 2-year-old Yazan Sultan Mohammad Al-Masri, and brothers 6-year-old Marwan Yousef Attalla al-Masri and 11-year-old Ibrahim Yousef Attalla al-Masri, along with 11-year-old Hussein Muneer Hussein Hamad and 16-year-old Ibrahim Abdullah Mohammad Hassanain were among those killed. The al-Masri family was killed while reportedly harvesting wheat in a field outside their home with their children playing nearby.

Fifteen-year-old Lina Iyad Fathi Sharir and both her parents were killed when an Israeli warplane completely destroyed a two-story residential building with two missiles fired on Gaza’s Al-Manara neighborhood.

The same attack killed Telbani’s mother Rima Telbani, who was five months pregnant. His 2-year-old sister Miriam is missing and is presumed dead.

A 17-year-old, Bashar Ahmad Ibrahim Samour, was killed the next morning near the Gaza perimeter fence in Abasan Al-Jadida. Israeli forces, deployed on the opposite side of the fence, shot Samour, who was doing farmwork and connecting irrigation pipes at the time.

Hamza Mahmoud Yassin Ali, 12, was struck by shrapnel from a missile fired by an Israeli drone in Gaza City’s Shuja’iyya neighborhood Tuesday. He succumbed to his wounds Wednesday morning at the Shifa Hospital in Gaza City.

Hamada and Ammar died on the spot. Elyan, who was struck with shrapnel in the abdomen, has been in critical condition at Khan Younis’ Nasser hospital since May 13.

A 3-year-old toddler, Muhammad et-Tanani, along with his three siblings, Ethem, 4, Emir, 5, and Ismail, 6, were killed in Khan Younis.

An infant only 5 months old, Muhammed Zeyn el-Attar, and his siblings Islam, 5, and Emire, 6, were killed in attacks in the Best Lahia region.

Ibrahim ez-Zentisi, 2, and Our ez-Zamili, whose age has not been specified, were murdered by Israeli elements.

Zacharia Allus, 17, fell victim to the Israeli attacks in the Jabalia region.

According to data from Palestine’s Information Ministry, over 3,000 children have so far been killed in Israel’s attacks on Palestine over the last two decades.

At least 122 Palestinians, including 31 children and 20 women, have been killed, and 900 others injured in the ongoing Israeli offensive against Gaza. Israel continues to attack Gaza with heavy air and artillery bombardment that has caused extensive damage to residential buildings across the enclave.

Tensions have been running high in the Sheikh Jarrah area in occupied East Jerusalem over the past month as Israeli settlers swarmed in following a court order for the eviction of Palestinian families in the area. As a consequence, Palestinians have been protesting in support of the residents of Sheikh Jarrah who have been targeted and threatened with expulsion by Israeli forces.