Israel moves to expand illegal settlement construction ahead of elections 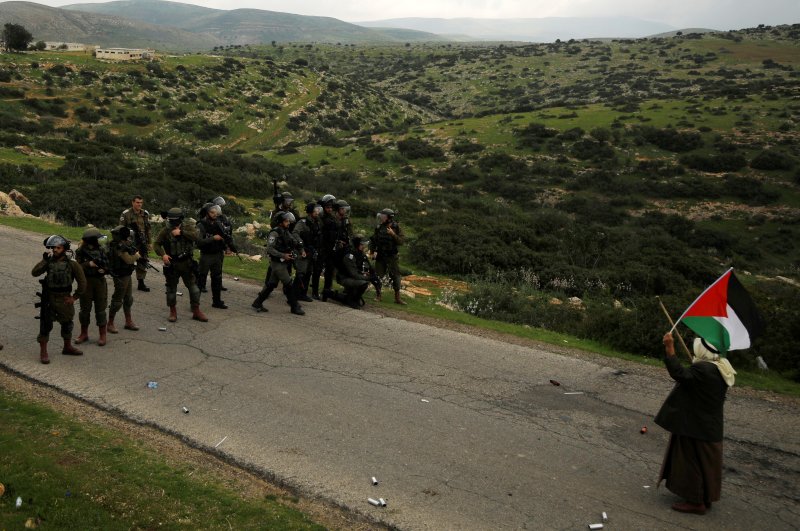 A demonstrator holds a Palestinian flag in front of Israeli forces during a protest against Israeli settlements, Jordan Valley in the Israeli-occupied West Bank, Feb. 25, 2020. (Reuters Photo)
by Daily Sabah with Agencies Feb 28, 2020 1:53 pm

Israel announced late Thursday their approval of nearly 1,800 new settler homes in the occupied West Bank, the latest in a recent string of promises to expand illegal settlements in the run-up elections, the third straight vote in less than a year after the previous two ended inconclusively.

The settlement watchdog Peace Now said the housing was spread over 10 settlements, some deep inside the West Bank in areas that the Palestinians want for a future state. About 1,000 units were in the initial stages of approval, whereas 700 received near-final approval.

Thursday’s announcement marks the second major settlement declaration in a single week. Israeli Prime Minister Benjamin Netanyahu, who failed to win a majority of votes in previous elections, pledged Tuesday to build 3,500 new illegal settler homes in a particularly sensitive area of the occupied West Bank. Both Palestinians and foreign opponents of the construction planned over the E-1 area of the West Bank have cautioned that the Israeli housing in the corridor's barren hills could bisect the West Bank, cutting Palestinians off from Jerusalem, thereby further dimming hopes for a contiguous Palestinian state. The E-1 plan would expand the large Jewish settlement of Maale Adumim, effectively connecting it to Jerusalem, which lies about a 15-minute drive away.

Israel is due to hold a general election on March 2 in which Defense Minister Naftali Bennett's far-right Yemina coalition and Netanyahu's rightwing Likud vie for the support of Israel's more than 600,000 settlers. Despite the fact that Netanyahu has lost his previous popularity among Israelis, he plays the Palestinian card each time. He promised to annex the West Bank, expanding illegal Israeli settlements and take harsher measures against the threats, allegedly coming from Palestinians.

Earlier this month, Netanyahu announced his approval of a new settlement with several thousand homes in Givat Hamatos, which is located next to the mainly Palestinian east Jerusalem neighborhood of Beit Safafa.

Netanyahu has embarked on a settlement building spree during the U.S. President Donald Trump's tenure and has promised to annex the strategic Jordan Valley. Since the unveiling of the Mideast initiative, Netanyahu has promise to charge ahead immediately with annexing the settlements, but he quickly backtracked, apparently after White House officials took issue with his premature zeal.

According to official data obtained by The Associated Press (AP) released last November, a surge in settlements has revealed systematic discrimination against Palestinians in the occupied territories as the number of construction permits granted to Jewish and Palestinian residents varies widely. Palestinians have condemned Netanyahu’s plan to build thousands of new settler homes in east Jerusalem as a pre-election tactic that risks fueling further violence. The international community regards all Israeli settlements in occupied Palestinian territories to be illegal and a major obstacle to Middle East peace. Israel occupied the West Bank in the 1967 Six-Day War, and hundreds of thousands of Jewish-Israelis are now living in the territory, which is claimed by Palestinians for their future state.