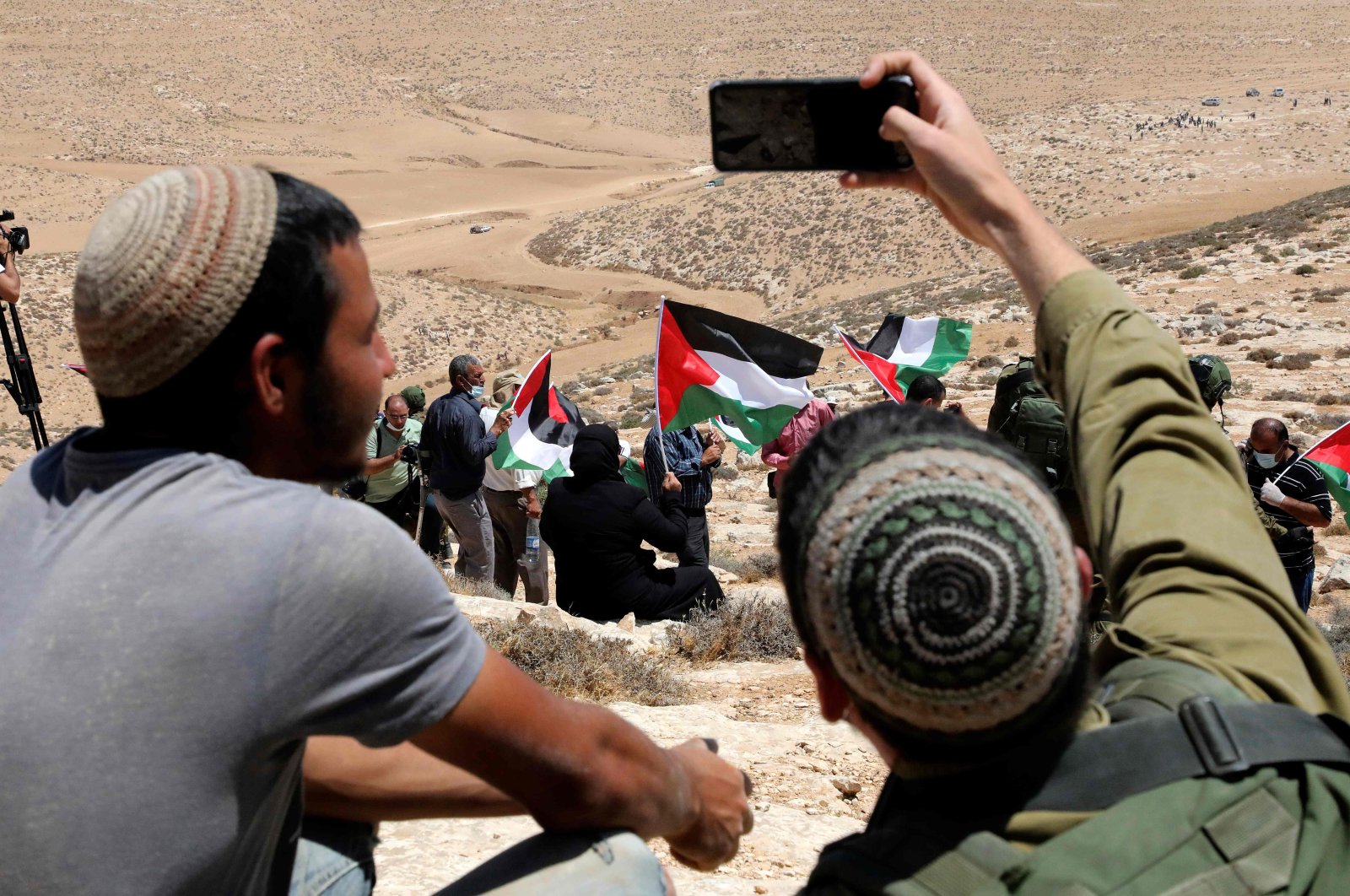 An Israeli soldier takes a selfie of himself with a Jewish settler, as Palestinian landowners and demonstrators protest Israeli settlement building activities on their land in al-Thaalaba village, near Yatta, south of Hebron city in the occupied West Bank, Aug. 21, 2020. (AFP Photo)
by REUTERS Aug 27, 2020 8:23 pm
RECOMMENDED

In an unexpected decision from the Israeli judiciary, the Supreme Court ruled Thursday that a cluster of homes in a Jewish settlement outpost in the occupied West Bank was built on privately owned Palestinian land and must, therefore, be removed.

Accepting a petition by Palestinian plaintiffs, Israel's top court overturned a 2018 District Court ruling which had broken judicial ground by recognizing the Mitzpe Kramim settlers' claim to the land, despite it being owned by Palestinians.

The District Court had declared the settlers the legal owners, finding that Israeli authorities were unaware the land was privately owned when they originally mapped out the area.

That ruling was based on an Israeli law which states that transactions with legal faults could be valid if they were conducted in "good faith."

Established 20 years ago on a hilltop overlooking the Jordan Valley, Mitzpe Kramim is home to about 40 families, most of whom live on Palestinian-owned plots and say they received Israeli authorities' approval to set up there.

But the Supreme Court said that the Israeli authorities had not acted in good faith by "turning a blind eye to the many warning signs given over many years" which showed the plots were actually owned by Palestinians.

Placing most of the responsibility for what it called "the painful outcome for Mitzpe Kramim's residents" on the state, the court gave authorities 36 months to find alternative housing for them.

Most countries consider the settlements built on land Israel captured in the 1967 Six-Day War as illegal. Israel and the United States dispute this. The Palestinians want the West Bank as part of a future state.

About 450,000 Israeli settlers live in the territory among some 3 million Palestinians. Israeli Prime Minister Benjamin Netanyahu's plan to annex parts of the West Bank was shelved this month after a diplomatic deal with the United Arab Emirates (UAE).