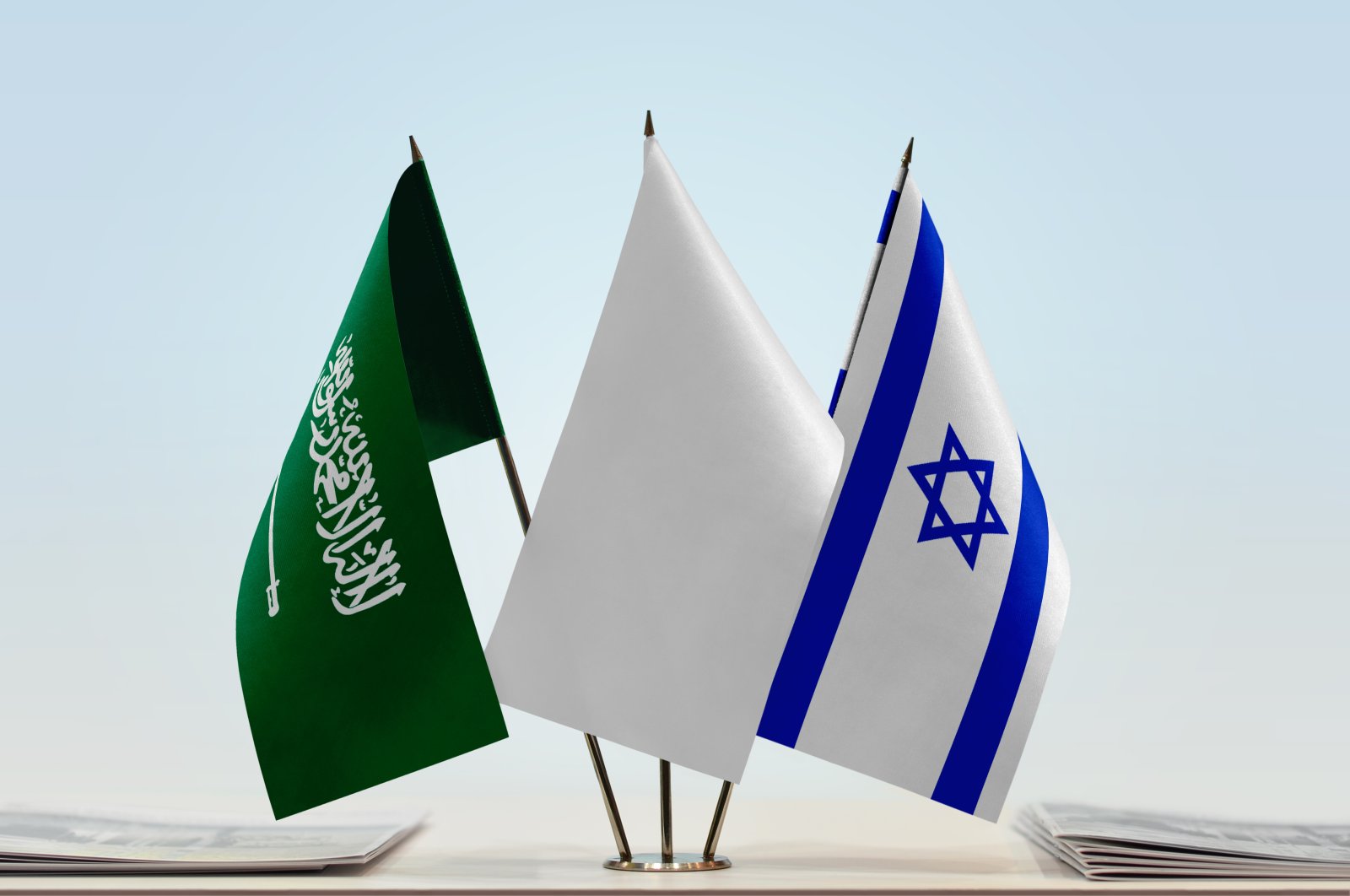 The flags of Saudi Arabia (L) and Israel (R) with a white flag in the middle. (Shutterstock Photo)
by Agence France-Presse - AFP Jun 26, 2022 1:37 pm
RECOMMENDED

The United States has hinted that more Arab nations could take steps to improve ties with Israel, ahead of President Joe Biden's trip to the Middle East.

All eyes are on Saudi Arabia, which Biden will visit in mid-July after he once vowed to treat the kingdom as a "pariah" state over the 2018 murder and dismemberment of Saudi journalist Jamal Khashoggi.

However, despite the recent signs of a U.S.-Saudi rapprochement, analysts say it is improbable Riyadh will agree to diplomatic ties with Israel – not during Biden's visit or while King Salman, 86, still reigns.

The king's official policy is that there should be no peace with Israel until it withdraws from occupied territories and accepts Palestinian statehood.

Here are some questions and answers about the possibility of a normalization deal between Saudi Arabia and Israel:

What are the signs?

Saudi's de facto ruler Crown Prince Mohammed bin Salman (MBS) has said Israel was a "potential ally, with many interests that we can pursue together," state media reported in March, attributing the statement to an interview with The Atlantic.

Additionally, the kingdom never showed any opposition when its regional ally, the United Arab Emirates (UAE), established diplomatic ties with Israel in 2020, followed by Bahrain and Morocco under the U.S.-brokered Abraham Accords.

In January 2021, Sudan's transitional government also agreed to do so but the northeast African country has yet to finalize the deal.

Saudi Arabia also at the time allowed direct flights from the Emirates to Israel to travel through its airspace, in another implicit sign of approval.

Biden, who will also visit Israel, is to travel directly from the Jewish state to Saudi Arabia, becoming the first U.S. president to fly from there to an Arab nation that does not recognize Israel.

In 2017 his predecessor, Donald Trump, made the journey in reverse.

In recent months, Saudis have taken to social media – which is tightly controlled in the kingdom – to express their support for normalization, which would be a shift from the kingdom's long-standing pan-Arab policy to isolate Israel until the conflict with the Palestinians is resolved.

Esawi Frej, Israel's minister of regional cooperation, told Saudi newspaper Arab News earlier in June that Riyadh would be "central" to any solution to the Israeli-Palestinian conflict.

The Axios news website reported, also this month, that the United States was working on a "road map" for normalization between Israel and Saudi Arabia, while The Wall Street Journal said the region's two most influential nations were engaging in secret economic and security talks.

In both countries' interests?

Yasmine Farouk of the Carnegie Endowment for International Peace said a relationship with Israel will contribute to greater acceptance of Saudi Arabia.

"It will open doors for the crown prince, with Western people and parliaments accepting the kingdom, and granting Saudi Arabia a greater role," she said.

"It will make a change, whether just in regards to the image of Saudi Arabia ... especially since (MBS) sees it as a global power, not just an Arab and Islamic one."

She said that Israel would want normalization "because not only will it open the door to Saudi Arabia, but to other (Arab and Muslim) countries that may already engage in secret discussions with Israel but don't dare normalize yet."

The two countries share a common enemy in Iran, said a Riyadh-based diplomat who spoke on condition of anonymity.

"They are looking at it in the sense of 'the enemy of my enemy is my friend'," he said.

Two Saudi officials contacted by Agence France-Presse (AFP) refused to comment due to the "sensitivity" of the issue.

Is it the right time?

Dan Shapiro, who served as former U.S. President Barack Obama's ambassador to Israel, told AFP he expects Biden's trip can produce "some important steps" towards Saudi diplomatic recognition of Israel, "probably not full normalisation, but a road map that leads in that direction."

But "not now," said Farouk. "It's difficult as long as King Salman is alive.

"The word 'normalization' should be used more cautiously ... There might be some forms of relations but going as far as the Emirates and Bahrain, I'm still a bit sceptical."

"In the meantime, we are likely to see a continuation of the current approach of normalizing the idea that Saudi Arabia and Israel are not enemies but share certain regional and geopolitical interests," he told AFP.