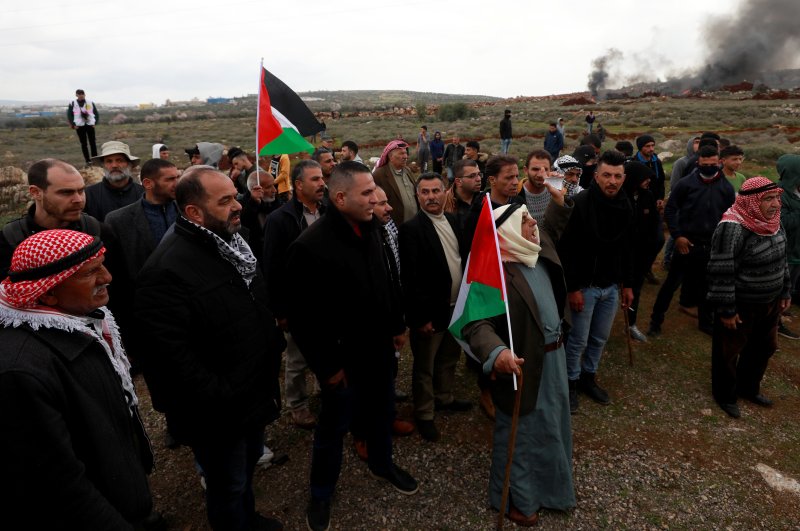 Palestinian demonstrators gather during a protest against Israeli settlements in the village of Qusra, in the Israeli-occupied West Bank, March 2, 2020. (REUTERS Photo)
by REUTERS Mar 05, 2020 1:05 pm
RECOMMENDED

Palestinians have launched protests in the occupied West Bank after Israeli bulldozers began clearing land in what villagers fear is an attempt to confiscate it for future Jewish settlements.

Scuffles intensified this week as Israelis voted in an election, with Palestinians saying settlers had been emboldened by U.S. President Donald Trump's Middle East plan and Israeli election rhetoric about annexing settlements.

Villagers from nearby Qusra challenged troops guarding Israeli bulldozers as they worked in a field close to Migdalim settlement in the northern West Bank. In another nearby village, Beita, residents protested over several days, planting a Palestinian flag and erecting a tent on the hilltop of al-Arma to defend it against settlers from Itamar settlement, near the city of Nablus. Some demonstrators hurled rocks at Israeli troops. Qusra protesters said Israel had stopped Palestinians from using or farming the lands in question since the 1990s, and now they feared settlers would seize them for their own use.

"I came here because this is my land and I want to die on my land, but they are not letting me come near it," said 70-year-old Joudat Odeh from Qusra. "They are happy at the victory of Netanyahu. They are coming to control this land and we are helpless," he said.

Victory would pave the way for Netanyahu to make good on his pledge to annex settlements in the West Bank under Trump's peace plan. Palestinians have rejected the proposal, saying it would kill their dream of establishing a viable state in the West Bank and Gaza Strip, territory Israel captured in the 1967 Middle East war.

More than 400,000 Israeli settlers now live among about 3 million Palestinians in the West Bank, with a further 200,000 settlers in East Jerusalem. Palestinians and much of the world view the settlements as illegal under international law, a position Israel and the U.S. dispute.