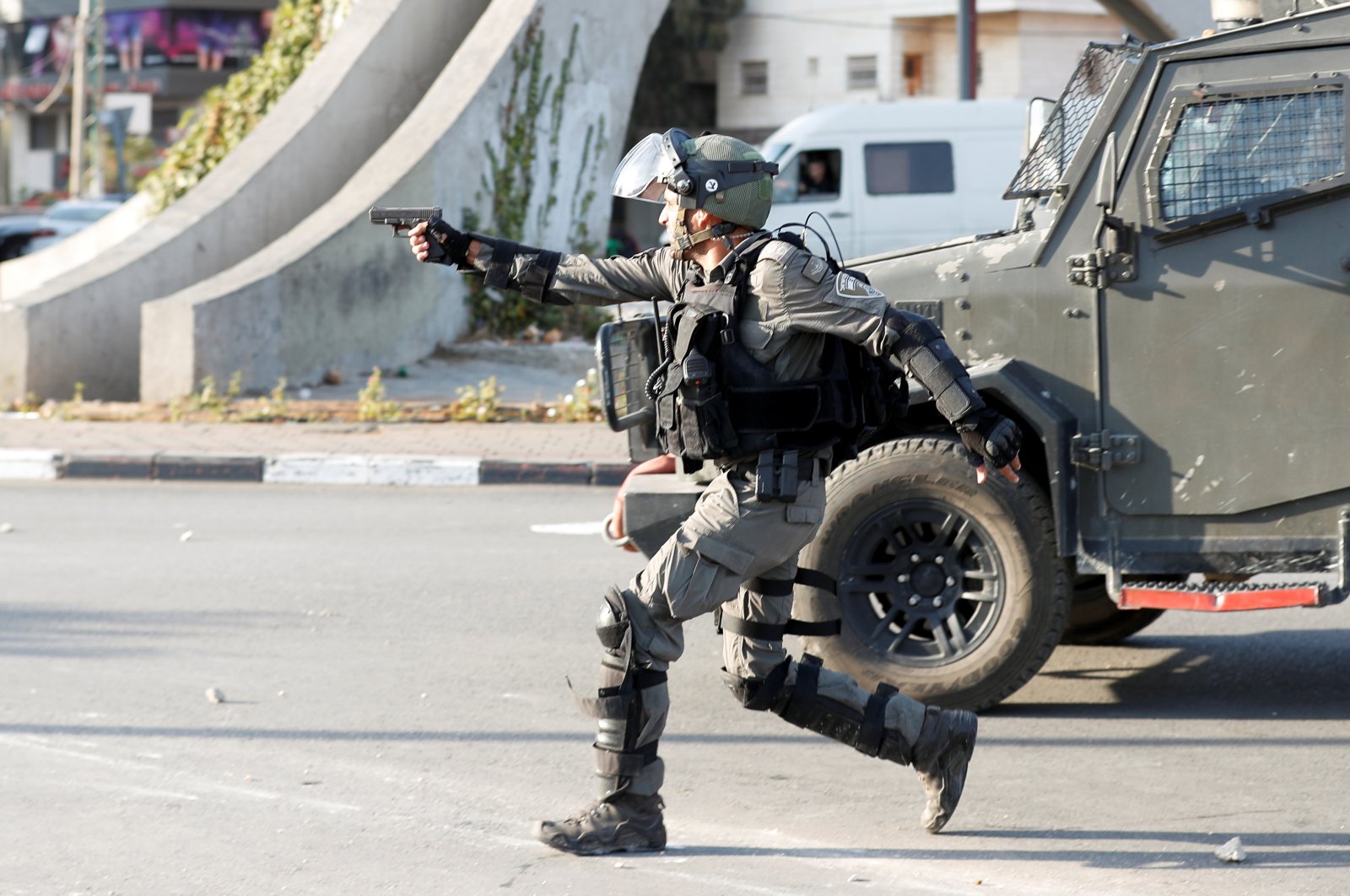 A member of the Israeli forces aims with a gun during a protest near the Jewish settlement of Beit El, near Ramallah, in the Israeli-occupied West Bank, Nov. 11, 2021. (Reuters Photo)
by French Press Agency - AFP Nov 14, 2021 7:43 pm
RECOMMENDED

Jewish settlers have committed more than 450 documented acts of violence against Palestinians in just early 2020 with Israeli forces choosing not to intervene to stop the attacks and the incidents in most cases and joining in on the attacks against the Palestinians in some, an Israeli rights group's report said Sunday.

In a report, the B'tselem rights group said that in 66% of the incidents – of which there 451 – when settlers in the occupied West Bank attacked Palestinians, Israeli forces did not go to the scene.

In 170 of the cases where the army did arrive, troops either chose not to intervene to protect the Palestinians or actively joined the attack.

"Settler attacks against Palestinians are a strategy employed by the Israeli apartheid regime, which seeks to advance and complete its misappropriation of more and more Palestinian land," B'tselem said in the report.

Israel, which has occupied the West Bank since 1967, rejects claims that its treatment of the Palestinians amounts to apartheid.

Israel's security forces did not immediately respond to questions regarding B'tselem's latest allegations.

Sadot said the group did not contact security forces for comment on the report because "we understood they do nothing about our accusations."

The group highlighted five examples in different parts of the West Bank that saw violent settlers take over more than 2,800 hectares of land.

It cited the case of Ma'on Farm, erected illegally in the southern West Bank but which together with a sub-outpost now controls some 264 hectares, including roads and pasture used by the area's Palestinian residents.

Shepherd Jummah Ribii, 48, of the Palestinian community of al-Tuwani, told B'tselem that assaults by settlers were pushing him away from farming that had sustained his family.

He said settlers attacked him severely in 2018. "They broke my leg, and I had to spend two weeks in hospital and continue treatment at home," B'tselem quoted him as saying.

"I had to sell most of our sheep to cover the cost of treatment."

Nearly half a million Israelis have moved to West Bank settlements that most of the international community regard as illegal.

Some settler outposts, including the Ma'on Farm, are also illegal under Israeli law, however, the government has been slow or unwilling to evacuate them.