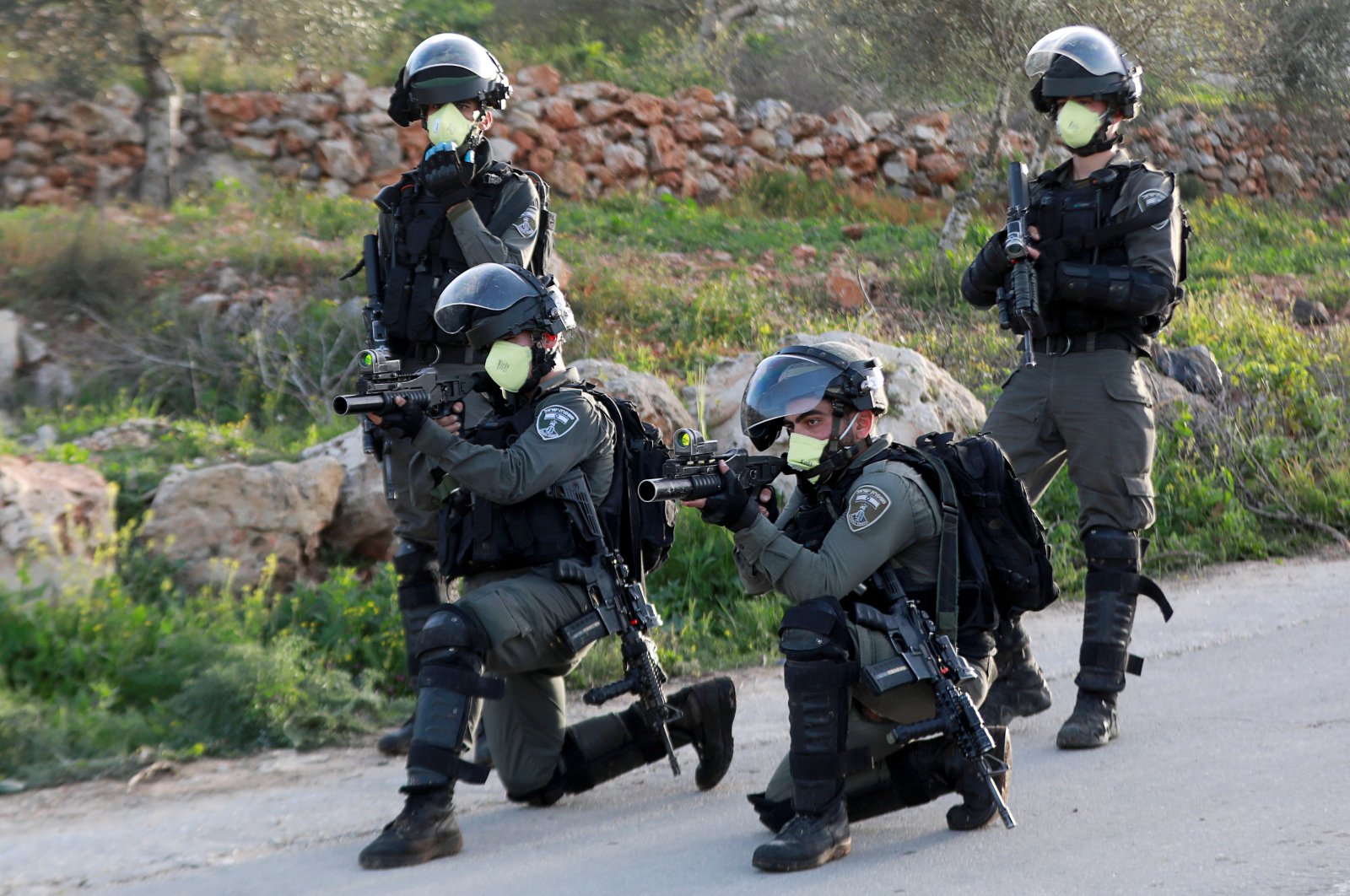 Israeli border police wearing masks aim their weapons during a Palestinian protest against Israeli settlements, near the town of Beita in the Israeli-occupied West Bank, March 11, 2020. (Reuters Photo)
by Daily Sabah with AP Mar 11, 2020 2:56 pm
RECOMMENDED

Israeli troops killed a Palestinian teenager in the occupied West Bank on Wednesday during a protest against feared Israeli land confiscation, spotlighting ongoing Israeli violence against teens and children.

The Palestinian Health Ministry said Mohammed Hamayel, 15, was shot in the head by a live bullet during confrontations with Israeli soldiers in the village of Beita and died in a hospital shortly after. Another 18 protesters were wounded by rubber-coated metal bullets fired by the troops. Dozens of Palestinians were protesting at the site in response to what they called an Israeli plan to confiscate land for nearby settlements. Palestinians and the international community view settlements that Israel has built in territory captured in the 1967 Arab-Israeli War as illegal.

Palestinian youth falling victim to violence is not a new phenomenon in the region. In the first Palestinian uprising that began in 1987, children and teens often threw stones at Israeli soldiers, who frequently responded with live rounds. According to the Israeli human rights group, B'Tselem, minors comprised about 21% of the deaths at that time. In the latest border protests in the occupied Gaza, that percentage has been roughly the same. Ever since the demonstrations began in March 2019, children and teens have been a constant presence among the surging crowds. While many are brought by parents who hold their hands and carry them on their shoulders, others make their way on their own. Hamas earlier stated that there is no way to prevent families from attending the Great March of Return protests. Israel has responded to the rallies with deadly force, killing more than 235 Palestinians and injuring thousands.

Israel was criticized by a U.N. human rights body for its killing of protesters in Gaza and for its treatment of Palestinians, declaring it a "war crime" under the Statute of Rome. The high casualty toll triggered a diplomatic backlash against Israel and new charges of excessive use of force against unarmed protesters. Rights groups have branded open-fire orders as unlawful, saying they effectively permit soldiers to use potentially lethal force against unarmed protesters. In the face of growing criticism over Gaza border violence, Israeli authorities earlier said that human rights laws do not apply to ongoing Palestinian protests along the Gaza Strip.