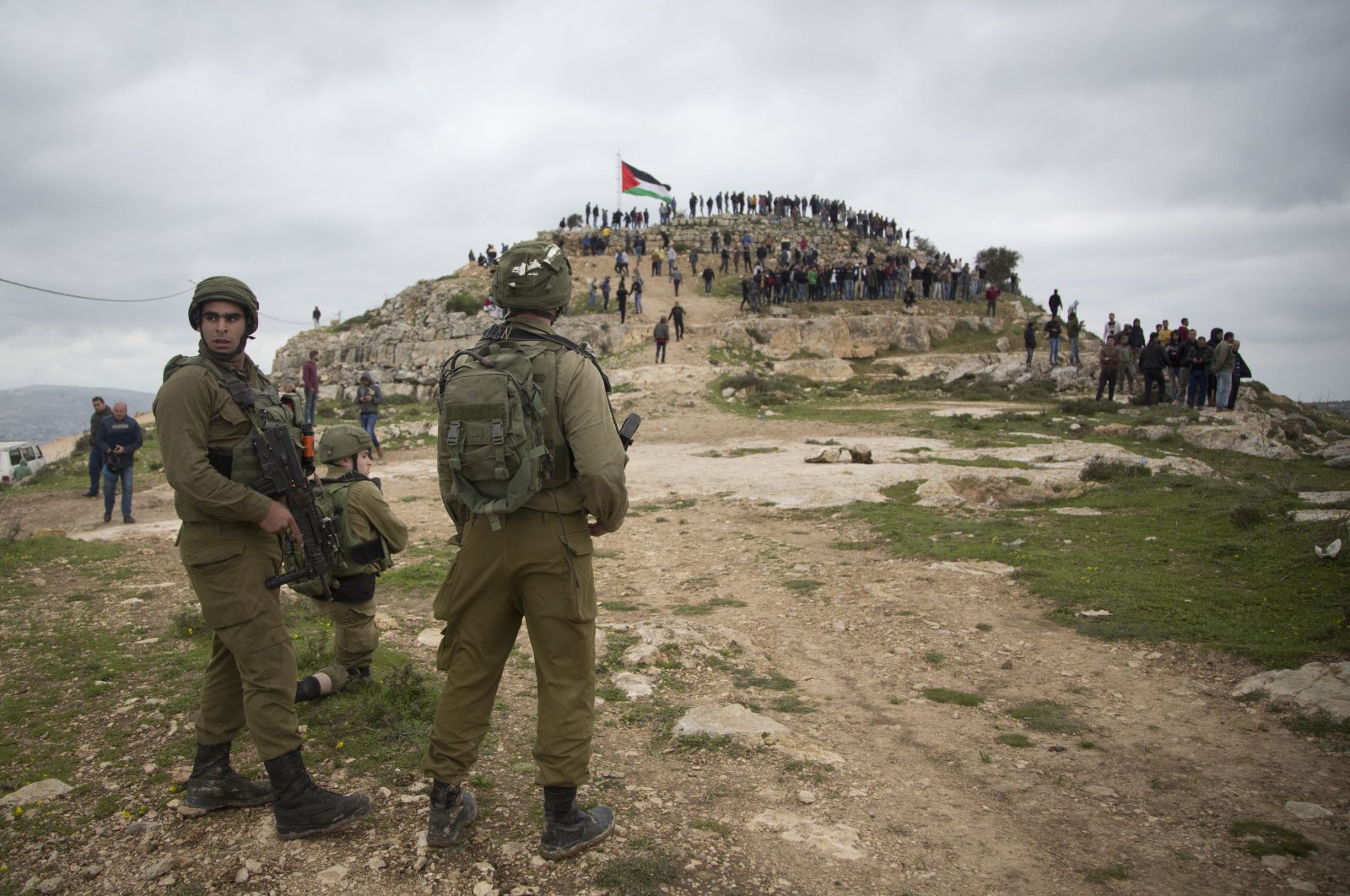 Israeli soldiers take position as Palestinian demonstrators gather during a protest against expansion of Israeli settlements, in the West Bank village of Beita near Nablus, Monday, March 2, 2020.(AP Photo)
by Associated Press Mar 18, 2020 10:34 am
RECOMMENDED

Israeli settlement activity in the West Bank surged ahead in 2019, a watchdog group said in a report Tuesday, maintaining a rapid pace that has drawn strength from the friendly policies of the Trump administration.

“In my opinion, they’re trying to take advantage of the window of opportunity that they have under the Trump administration, knowing that it might change in a few months,” said Hagit Ofran, a researcher for the group. “There was no such supportive administration for the settlements previously, ever.”

Most of the world considers the West Bank, captured by Israel in the 1967 Mideast war, to be occupied territory and Israeli settlements illegal obstacles to peace.

In a break from his Republican and Democratic predecessors, Trump has taken a much softer line toward the settlements. Surrounded by a group of advisers with close ties to the settlement movement, Trump’s administration declared last year that it did not consider the settlements to be illegal under international law. Then, in January, he unveiled a Mideast plan that envisions placing large parts of the West Bank, including all of the settlements, under permanent Israeli control.

The Palestinians, with wide international backing, seek all of the West Bank and east Jerusalem, also occupied in 1967, as parts of a future independent state.

With nearly 500,000 settlers now living in the West Bank, and over 220,000 more in east Jerusalem, the Palestinians say the chances of establishing a state in those territories are quickly dwindling. They have rejected the Trump Mideast plan, saying it would extinguish any remaining hopes of independence.

According to the Peace Now figures, Israel began construction on 1,917 new homes in the West Bank last year. That marked a slight dip from 2,100 construction starts in 2018. But overall, Israel has begun construction on an average of 2,267 homes per year since Trump took office, compared to an annual average of 1,807 units during the Obama administration. The construction was scattered throughout the West Bank, including small settlements deep inside the territory.

That new annual construction could house roughly an additional 9,000 people per year in settlements, based on Peace Now's estimate of four people per a household.

Under Israeli law, settlements must go through several stages of bureaucratic planning before construction begins.

According to Peace Now, Israel last year advanced plans to build nearly 8,457 new homes, putting them on track to potentially be built in the coming years — up from 5,618 units last year and 6,742 in 2017.

By comparison, Israel advanced plans for a total 4,611 new homes during the final two years of the Obama administration, when ties with the U.S. were strained.

Oded Revivi, mayor of the settlement of Efrat and the chief foreign envoy of the Yesha settler council, said it was “no secret” that the Trump administration has been more tolerant of construction.

Whether the thousands of units in the pipeline are built, he said, will depend on who leads Israel’s next government and who wins the U.S. presidential election in November.

“If we still have the same players, Netanyahu and Trump, I predict the figures you will see in 2020, or more accurately 2021, will actually be higher than 2019,” he said.

Netanyahu, fighting for his political life, took a number of pro-settlement steps while campaigning for re-election early this year.

Immediately after Trump unveiled his Mideast plan, Netanyahu vowed to begin annexing the settlements. When the White House balked, he pushed forward a flurry of new settlement plans as he tried to cater to his hard-line base.

During the first two months of this year, Israel pushed ahead plans for an additional 7,500 homes — nearly half of them in the sensitive “E1” area, according to Peace Now.

Developing that area, jutting deep into the West Bank east of Jerusalem, would hinder Palestinian hopes of creating a contiguous state. Israel has previously refrained from building in E1 due to opposition by prior U.S. administrations. Israel also moved ahead with plans to build over 1,500 units in a contentious area of east Jerusalem.

Despite these steps, Netanyahu came up short as the March 2 election ended in deadlock. Netanyahu’s rival, Benny Gantz, is now trying to form the country’s next government but also appears to face long odds of success. If neither man can cobble together a governing coalition, the country could plunge into a fourth consecutive election, placing Netanyahu’s future into question as he prepares to go on trial for corruption charges.

Trump’s future, meanwhile, also is suddenly in question following widespread criticism of the slow U.S. response to the coronavirus crisis.

The virus could also play a role in the growth of the settlements in the coming months. An economic slowdown, for instance, could potentially slow demand in the Israeli housing market, including in settlements.

In the West Bank, there are also risks from Israelis and Palestinians — who are covered by two different health systems and governments — coming together. Revivi’s settlement, for example, is next to the Palestinian city of Bethlehem, and residents often come into contact with one other. Thousands of Palestinians, including construction workers, work in the settlements.

“With all the potential of catching the virus, all these things become a much more relevant issue that needs to be discussed, determined, decided upon and definitely acted upon,” Revivi said.