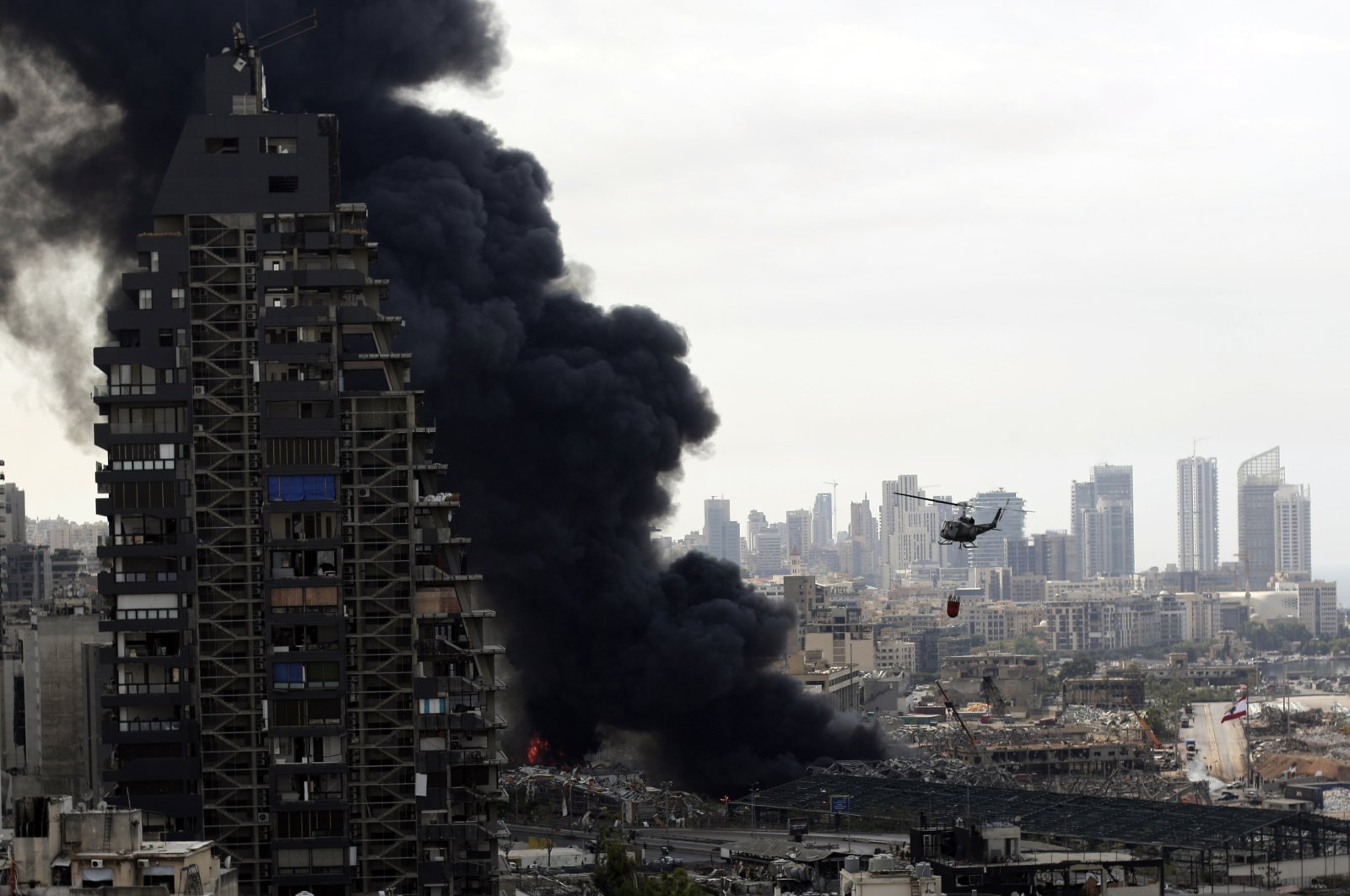 A huge fire broke out Thursday at the Port of Beirut, the site of last month's catastrophic explosion that killed nearly 200 people and devastated parts of the capital. The new fire nearly 40 days after the blast triggered widespread panic among traumatized residents of the area.

The International Committee of the Red Cross (ICRC) on Thursday said its humanitarian operations risked serious disruption as the fire hit a warehouse containing its food aid. "The warehouse on fire is where ICRC stocks thousands (of) food parcels and 0.5 million" liters of oil, ICRC regional director Fabrizio Carboni said. "Our humanitarian operation risks to be seriously disrupted."

It wasn't immediately clear what caused the fire at the facility, which was decimated by the Aug. 4 explosion when nearly 3,000 tons of ammonium nitrate detonated. The blast triggered a shock wave that blew out windows, doors and walls miles away and was felt as far away as the island of Cyprus.

A column of thick black smoke billowed from the port at midday Thursday, with orange flames leaping from the ground. Smoke covered the capital and firefighters and ambulances rushed to the scene. Army helicopters were taking part in efforts to extinguish the fire.

"We opened all windows and are in the corridor right now,” said Dana Awad, a mother of two girls in a Beirut neighborhood. "I am still feeling the earth shake. Living a flashback.” She was referring to the tremor that preceded the Aug. 4 explosion.

The Lebanese army said the fire started at a warehouse where oil and tires are placed in the duty free zone, adding that efforts to battle the fire were ongoing.

Panicked residents - still struggling to get over last month's catastrophic explosion - cracked open windows and called and texted each other to warn them of the new danger. Local TV stations said companies that have offices near the port asked their employees to leave the area.

A video circulating on social media showed port workers running away in fear as soon as the fire broke out, a chilling reminder of last month’s blast that killed dozens of port employees and 10 firefighters. Lebanese troops closed the major road that passes near the port rerouting traffic to other areas.

The Aug. 4 explosion killed more than 190 people, injured around 6,500 and damaged thousands of buildings in the Lebanese capital. The explosion, the single most destructive blast in Lebanon's history, is blamed on government negligence and mismanagement.

Lebanese speculated in the wake of Thursday's fire that it could be an attempt to remove evidence of last month's explosion from the scene. Some hid in bathrooms, others dropped what they were doing and rushed home.

The panic was compounded by the trauma from the Aug. 4 explosion and the fear that more chemicals could be in the wreckage of the port. Earlier this month, the Lebanese army said it discovered more than 4 tons of ammonium nitrate in four containers stored near the port that it said were "dealt with.”

Days after the Aug. 4 blast, French and Italian chemical experts working amid the remains of the port identified more than 20 containers carrying dangerous chemicals. The army later said that these containers were moved and stored safely in locations away from the port.

State-run National News Agency said the fire was at a warehouse where tires are placed. It added that firefighters are dealing with the blaze.

Beirut Gov. Marwan Abboud and authorities called on people to stay away from roads leading to the port to allow fire engines to move quickly.

Port director Bassem al-Qaisi told Voice of Lebanon radio the fire started in a warehouse where barrels of cooking oil were placed and later spread nearby to where tires were piled.

"It is too early to now if it is the result of heat or some other mistake,” al-Qaissi said adding that the black smoke was from burning tires.

It was the second fire at the port this week. On Tuesday, a small fire erupted, also creating some panic, that was quickly extinguished.