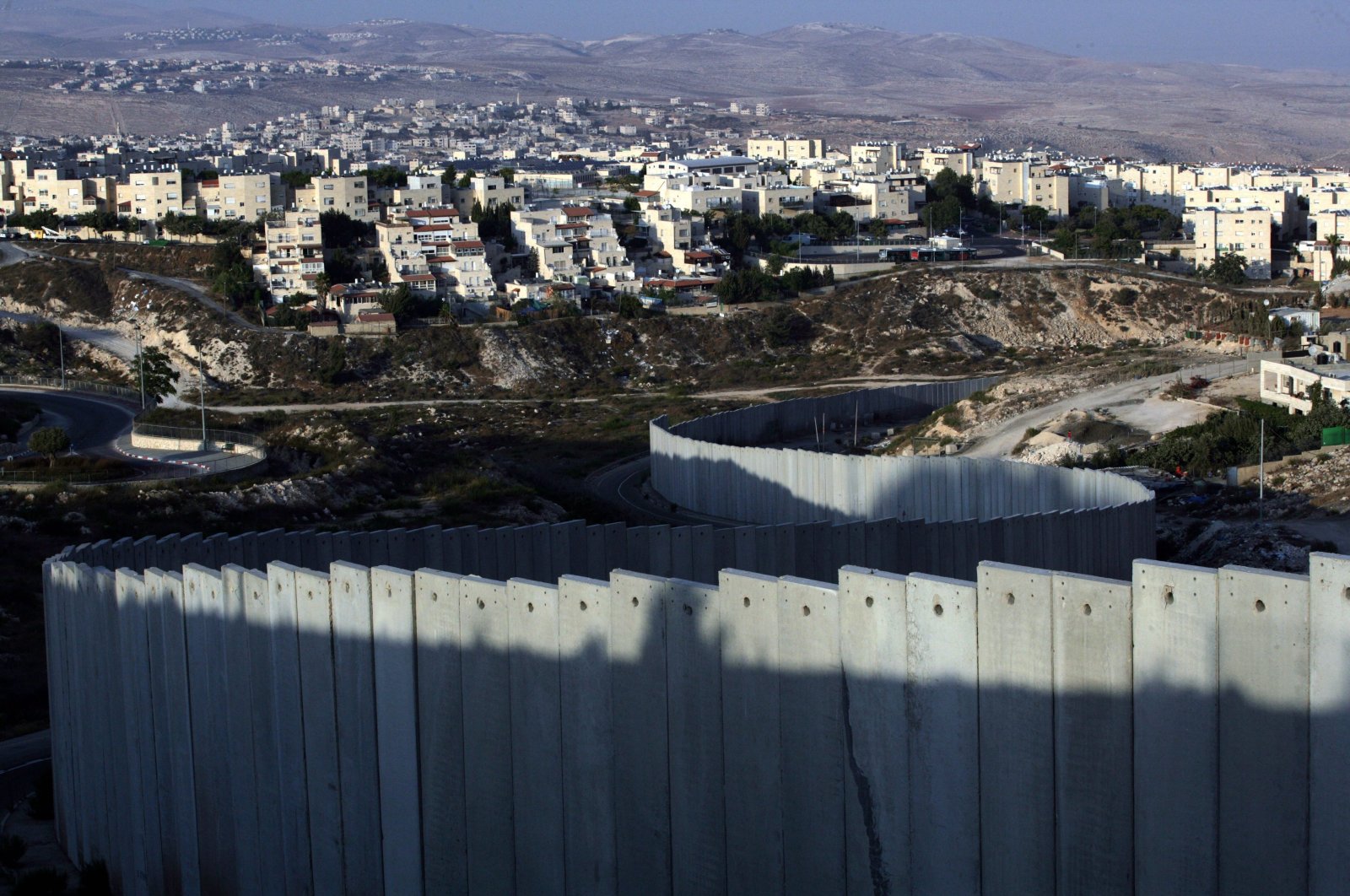 A general view shows the Israeli barrier in the occupied West Bank near the illegal Jewish settlement of Pisgat Zeev in Jerusalem, Sep. 18, 2011. (EPA Photo)
by Daily Sabah with AP Jan 12, 2021 11:55 am

Israel is a state that segregates, separates and discriminates openly on the basis of ethnicity, religion and nationality, leading human rights organization says, describing Tel Aviv's treatment of Palestinians as 'apartheid between the river and the sea"

For decades Palestinians have been the subject to various legal and oppressive regimes emanating from the same source. Tel Aviv’s colonial policies staking claim to the country make it impossible for peace to be achieved between the nations of Israel and Palestine. Numerous human rights organizations have consistently voiced their concerns about the racist legislation in the Knesset and the blatantly discriminant policies against Palestinians.

A leading Israeli human rights group began referring to Israel and its control of the Palestinian territories as an "apartheid" regime – an explosive term the country's leaders and their supporters vehemently reject. In a report released Tuesday, B'Tselem shared that while Palestinians live under different forms of Israeli control in the occupied West Bank, blockaded Gaza, annexed East Jerusalem and within Israel itself, all have fewer rights than the Jews in the entire area between the Mediterranean Sea and the Jordan River.

"One of the key points in our analysis is that this is a single geopolitical area ruled by one government," said B'Tselem director Hagai El-Ad. "This is not democracy plus occupation. This is apartheid between the river and the sea."

The fact that a respected Israeli organization has used such a term, considered a taboo even by critics of Israel, points to a broader shift in the debate as the occupation of the lands captured by war drags on for over half a century and hopes for a two-state solution fade.

Peter Beinart, a prominent Jewish-American critic of Israel, caused a similar stir last year when he came out in favor of a single binational state with equal rights for Jews and Palestinians. B'Tselem does not take a position on whether there should be one state or two.

Israel has long presented itself as a thriving democracy in which Palestinian citizens, who make up about 20% of its population of 9.2 million, have equal rights. Israel seized East Jerusalem, the West Bank and the Gaza Strip in the 1967 war – lands that are home to nearly 5 million Arabs and which the Palestinians want for a future state.

Israel withdrew troops and settlers from Gaza in 2005 but imposed a blockade after the Hamas group seized power there two years later. It considers the occupied West Bank "disputed" territory whose fate should be determined in peace talks. Israel annexed East Jerusalem in 1967 in a move not recognized internationally and considers the entire city its unified capital. Most Palestinians in East Jerusalem are Israeli "residents," but not citizens with voting rights.

B'Tselem argues that by dividing up the territories and using different means of control, Israel masks the underlying reality – that roughly 7 million Jews and 7 million Palestinians live under a single system with vastly unequal rights.

"We are not saying that the degree of discrimination that a Palestinian has to endure is the same if one is a citizen of the state of Israel or if one is besieged in Gaza," El-Ad said. "The point is that there isn't a single square inch between the river and the sea in which a Palestinian and a Jew are equal."

Israel's harshest critics have used the term "apartheid" for decades, evoking the system of white rule and racial segregation in South Africa that was brought to an end in 1994. The International Criminal Court (ICC) defines apartheid as an "institutionalized regime of systematic oppression and domination by one racial group."

"There is no country in the world that is clearer in its apartheid policies than Israel," said Nabil Shaath, a senior adviser to Palestinian President Mahmoud Abbas. "It is a state based on racist decisions aimed at confiscating land, expelling indigenous people, demolishing homes and establishing settlements."

In recent years, as Israel has further entrenched its rule over the West Bank, Israeli writers, disillusioned former general and politicians opposed to its right-wing government have increasingly adopted the term.

But until now B'Tselem, which was established in 1989, had only used it in specific contexts.

Israel adamantly rejects the term, saying the restrictions it imposes in Gaza and the West Bank are temporary measures needed for security. Most Palestinians in the West Bank live in areas governed by the Palestinian Authority (PA), but Israeli checkpoints surround those areas and Israeli soldiers can enter at any time. Israel has full control over 60% of the West Bank.

The first was a contentious law passed in 2018 that defines Israel as the "nation-state of the Jewish people." Critics say it downgraded Israel's Palestinian minority to second-class citizenship and formalized the widespread discrimination they have faced since Israel's founding in 1948. Supporters say it merely recognized Israel's Jewish character and that similar laws can be found in many Western countries.

The second was Israel's announcement in 2019 of its intention to annex up to a third of the occupied West Bank, including all of its Jewish settlements, which are home to nearly 500,000 Israelis. Those plans were put on hold as a normalization agreement reached with the United Arab Emirates (UAE) last year, but Israel has said the pause is only temporary.

B'Tselem and other rights groups argue that the boundaries separating Israel and the West Bank vanished long ago – at least for Israeli settlers, who can freely travel back and forth, while their Palestinian neighbors require permits to enter Israel. There have been no substantive peace talks in more than a decade. The occupation, which critics have long warned is unsustainable, has endured for 53 years.

"Fifty years plus, that's not enough to understand the permanence of Israeli control of the occupied territories?" El-Ad said. "We think that people need to wake up to reality, and stop talking in future terms about something that has already happened."

The U.N. considers both the West Bank and East Jerusalem occupied territories and considers Israeli settlement-building activity in these areas illegal. Palestinians have been vying to create a full-fledged future state comprising areas of the West Bank of the Jordan River and Gaza on the Mediterranean coast.

Since 2007, the besieged Gaza has been under a crippling Israeli and Egyptian blockade that has gutted its economy and deprived its inhabitants of many vital commodities, including food, fuel and medicine. In the long-embargoed enclave, the humanitarian situation has grown worse by the day as 90% of its land and sea boundaries, and its access to the outside world is controlled by Israel and by Egypt on its narrow southern border.