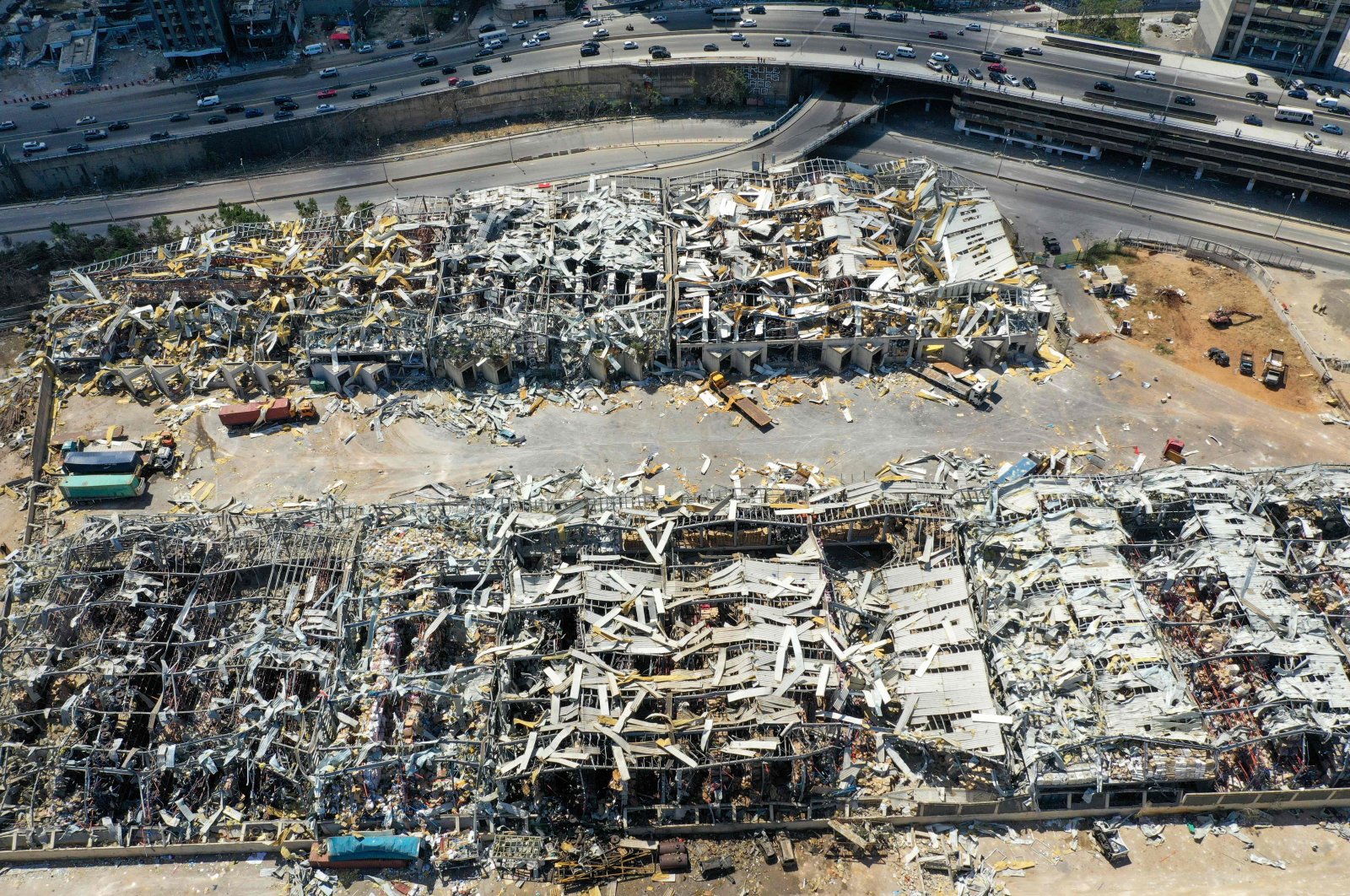 An aerial view taken on Aug. 9, 2020, shows a partial view of the port of Beirut, damaged as a result of the colossal explosion of a huge pile of ammonium nitrate that had languished for years in a port warehouse, leaving scores of people dead or injured and causing devastation in the Lebanese capital. (AFP Photo)
by French Press Agency - AFP Aug 09, 2020 6:31 pm
Edited By Nurbanu Tanrıkulu Kızıl
RECOMMENDED

The Lebanese army said Sunday that hopes have dwindled of finding survivors at the blast site in Beirut following days of search and rescue operations supported by international experts.

"After three days of search and rescue operations we can say we have finished the first phase, which involved the possibility of finding survivors," Colonel Roger Khoury told a news conference.

"As technicians working on the ground, we can say we have fading hopes of finding survivors," added Khoury, who heads a team of military technicians operating at the blast site.

The huge explosion that hit Beirut's port devastated large parts of the Lebanese capital, claimed over 150 lives and wounded some 6,000 people.

At least 21 people remain missing, according to the health ministry.

Their relatives have watched breathlessly as rescuers from France, Germany, Russia, Qatar and other countries assisted Lebanese authorities in their search and rescue efforts.

But none have managed to find survivors, not even eight to nine port employees French experts believed were trapped alive in a control room buried beneath the rubble.

"We worked nonstop for 48 hours from Thursday morning to try to reach this control room. Unfortunately, we did not find a single... survivor," said Colonel Vincent Tissier, leader of the French rescue team. In collaboration with other rescue teams, Tissier said they managed to uncover a total of five corpses.

Most Lebanese authorities say Tuesday's explosion was triggered by a fire in a port warehouse, where a huge shipment of ammonium nitrate, a chemical that can be used as a fertilizer or as an explosive, had languished for years.

The revelation that state officials had long tolerated a ticking time-bomb in the heart of the capital has served as shocking proof to many Lebanese of the rot at the core of the state apparatus.

World leaders, international organizations and a seething Lebanese public have pressed for an international probe, but President Michel Aoun has said that calls for such an investigation are a "waste of time."

In Beirut, the fury on the streets has further shaken the embattled government of Prime Minister Hassan Diab, which saw its first cabinet resignation when the information minister, Manal Abdel Samad, quit Sunday.

At least six lawmakers have also quit since the Aug. 4 explosion.