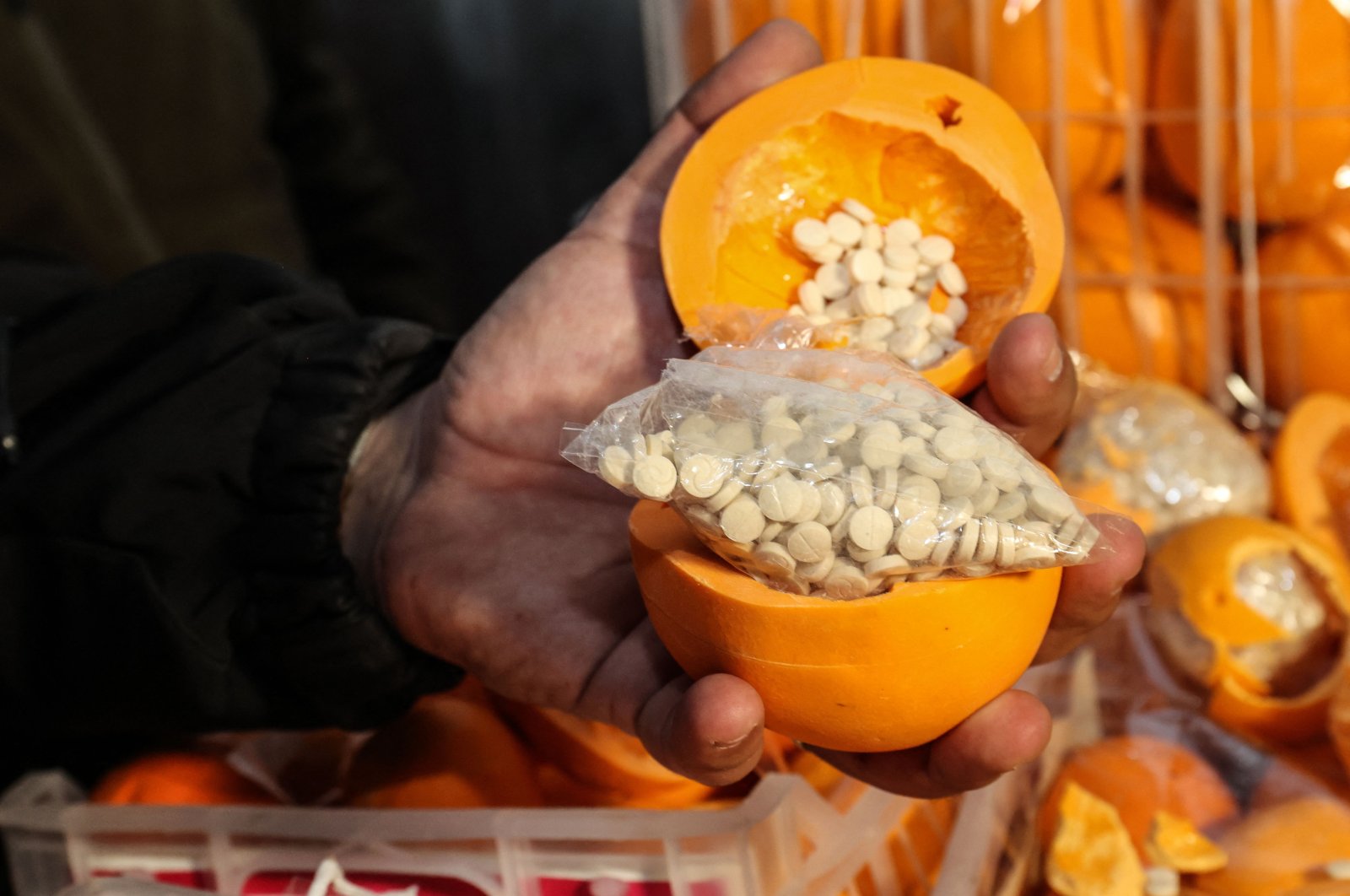 A man shows fake oranges filled with Captagon pills and dissimulated in boxes containing real fruit, after the shipment was intercepted by the customs and the anti-drug brigade at the Beirut port, in the Lebanese capital, on December 29, 2021. (AFP Photo)
by Agencies Dec 30, 2021 9:09 am
RECOMMENDED

Lebanese authorities on Wednesday intercepted 9 million pills of the recreational drug Captagon inside a shipment of oranges, foiling an attempt to smuggle them to the Gulf, media reported.

Captagon – a mix of amphetamines also known as the "poor man’s cocaine" – is one of the more popular recreational drugs among affluent youth in the Middle East. Much of it is bound for illegal recreational use in Saudi Arabia.

A customs officer confirmed to Agence France-Presse (AFP) that this cargo was en route to Kuwait.

"We want to send a message to the Arab world about our seriousness and our work to thwart evil from harming our Arab brothers," Mawlawi said as he inspected the shipment in Beirut.

The Captagon tablets were placed in small bags hidden in fake oranges among a real fruit shipment. An investigation has been opened to determine its source. Lebanon, which is suffering political paralysis and economic crisis, has boosted efforts to thwart Captagon trafficking through its ports following criticism from Gulf countries over lack of cooperation.

This was the second regional seizure in a week of Captagon hidden in fruit.

On Dec. 23, Dubai police said they arrested four men "of Arab nationality" for trying to smuggle millions of dollars worth of Captagon into the United Arab Emirates (UAE).

The more than 1 million pills were concealed in plastic lemons among a shipment of real lemons.

Saudi Arabia announced in April the suspension of fruit and vegetable imports from Lebanon after the seizure of more than 5 million Captagon pills hidden in fruit. Captagon is a brand name for the amphetamine-type stimulant fenethylline.

According to a European Union-funded report by the Center for Operational Analysis and Research, "Captagon exports from Syria reached a market value of at least $3.46 billion" in 2020.

In November the Syrian army said it seized half a ton of Captagon concealed in a spaghetti shipment before it could be smuggled out of the country.

In October, Saudi Arabia, Kuwait and Bahrain expelled Lebanese diplomats and recalled their own envoys following a Hezbollah-aligned minister's critical comments on the Yemen war. Riyadh also banned all imports from Lebanon. The UAE recalled its envoys.

During their meeting this month, Gulf Cooperation Council leaders called on Lebanon to tighten border controls and take measures to deter drug smuggling via exports into Saudi Arabia and other Gulf states.

Dubai police said last week that they had uncovered around $15.8 million worth of Captagon pills, also hidden in a shipment of lemons, and arrested four suspects.