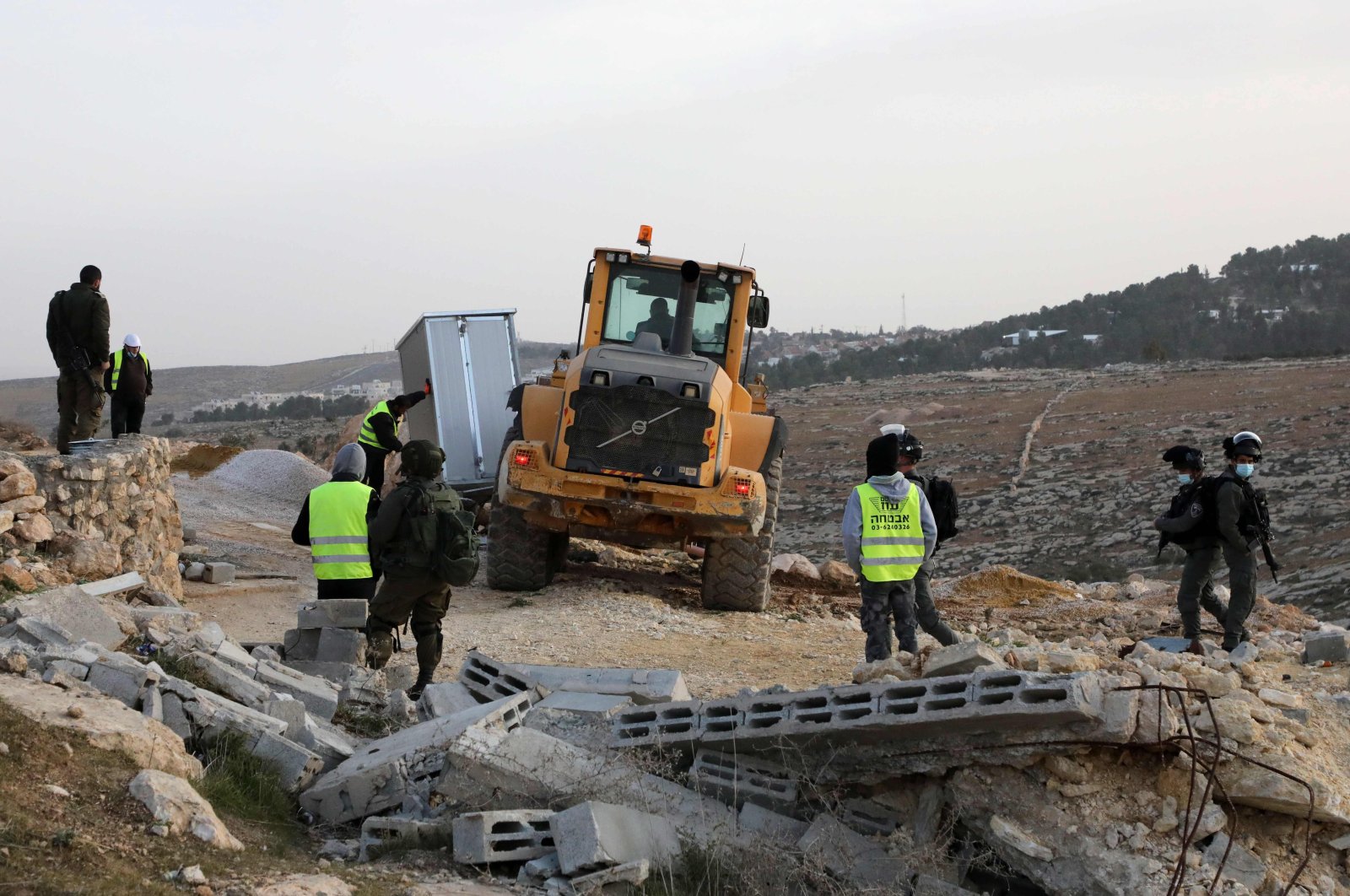 Israeli security forces gather as an army bulldozer removes a structure in the village of al-Mufagara, near Yatta, south of Hebron in the occupied West Bank, Palestine, Jan. 27, 2021. (AFP Photo)
by Anadolu Agency Jan 28, 2021 9:15 am
RECOMMENDED

"This is a crime and a blatant attack on Muslims' feelings," Hussam Abu al-Rub said in a statement, calling on the Arab and Muslim world to intervene to stop Israel's attacks.

Using bulldozers, Israeli forces razed the mosque, which was under construction in the town of Umm Qusah south of Hebron, and several structures in the occupied West Bank. In addition, a livestock structure in Khamis al-Jahalin East of Jerusalem was also bulldozed, an eyewitness said. Two other livestock facilities were demolished in the Bir al-Maskoub community in occupied East Jerusalem. Palestinians say all of the razed structures were located in Area C.

Under the 1995 Oslo Accords between Israel and the Palestinian Authority (PA), the West Bank, including east Jerusalem, was divided into three sections – Areas A, B and C.

Israel can prevent Palestinians from carrying out construction projects in parts of the West Bank designated as Area C under the agreement, which falls under Israel's administrative and security control. Area C is currently home to 300,000 Palestinians, the vast majority of whom are Bedouins and herding communities who predominantly live in tents, caravans and caves. International law views both the West Bank and east Jerusalem as occupied territories and considers all Jewish settlement-building activity there illegal.

In 2020 Israeli authorities demolished 729 Palestinian buildings on the pretext of lacking construction permits, according to an Israeli human rights group.

"Israel has displaced by its policies 1,006 Palestinians, including 519 minors, after the demolition of 273 homes," the Israeli Information Center for Human Rights in the Occupied Territories, B'Tselem, said. It went on to say that Israel "demolished 456 structures for non-residential purposes, including vital humanitarian facilities and installations such as water and electricity networks." B'Tselem also said Israeli occupation forces killed 27 Palestinians in 2020, including seven minors.

The center pointed out that it documented 248 attacks carried out by Israeli settlers against Palestinians in the occupied West Bank in 2020. The attacks ranged from physical assaults and throwing stones at Palestinian homes, to targeting farmers or their properties, including 80 incidents of damaging trees and other crops, which resulted in the destruction of more than 3,000 trees.