Palestinians declare end to agreements with Israel, US over annexation plan 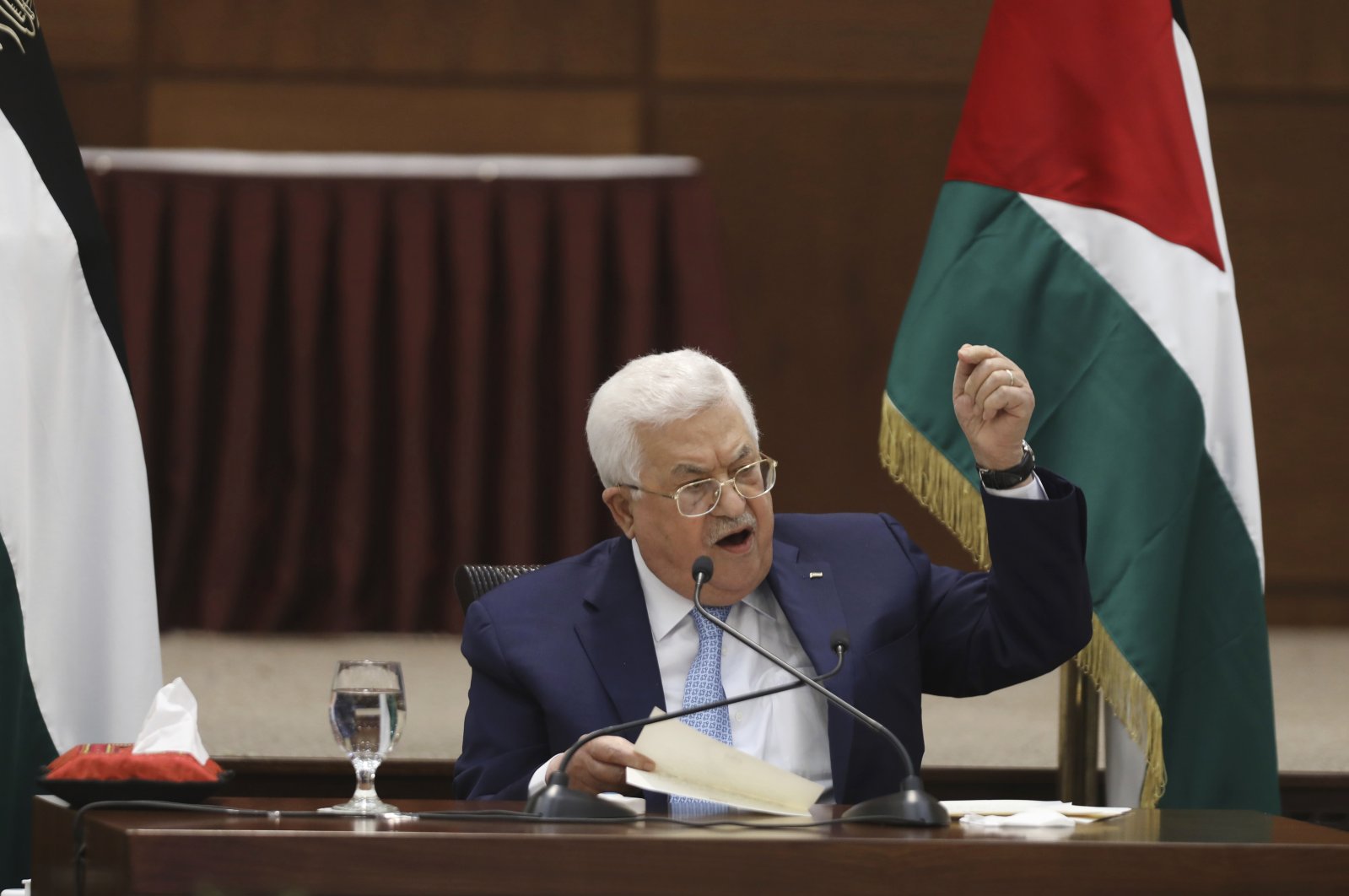 Palestinian President Mahmoud Abbas heads a leadership meeting at his headquarters in the West Bank city of Ramallah, May 19, 2020. (AP Photo)
by DAILY SABAH WITH AGENCIES May 20, 2020 3:13 pm

Palestinian President Mahmoud Abbas announced late Tuesday an end to all security coordination with Israel and the United States, following the Israeli government's pledge to annex large parts of the occupied West Bank that have led to widespread international condemnation.

Abbas said the Palestinian government was "absolved, as of today, of all the agreements and understandings with the American and Israeli governments and of all the obligations based on these understandings and agreements, including the security ones." Speaking after a meeting of the Palestinian leadership in Ramallah, the 85-year-old leader said the Israeli annexation of any part of the occupied West Bank would ruin chances for a two-state solution. He also announced that the Palestinians would step up their campaign to join international organizations as a member state, in defiance of the U.S.

The Oslo accords and other agreements in the 1990s created the Palestinian Authority and govern its political, economic and security relations with Israel. A genuine end to security coordination could jeopardize the relative calm in the West Bank, where 2.7 million Palestinians live alongside more than 400,000 Israeli settlers. Israel controls all access to the territory where Abbas's government is based and even basic tasks require coordination between the two sides. Even Abbas himself needs Israeli coordination to travel from Ramallah, where the government is based, to other Palestinian cities. The Palestinian Authority governs and provides basic services to heavily populated areas of the occupied West Bank. Dismantling this would risk chaos and leave tens of thousands of civil servants unemployed. Security coordination broke down during the 2000-2005 intifada, or "uprising."

Israeli Prime Minister Benjamin Netanyahu has vowed to annex the Jordan Valley and Jewish settlements in the West Bank in line with President Donald Trump's Middle East plan, which overwhelmingly favors Israel and was rejected by the Palestinians. Netanyahu formed a new Israeli government earlier this month with his chief rival, Benny Gantz, following three elections and more than a year of gridlock. The coalition agreement allows Netanyahu to present an annexation proposal to the government as soon as July 1.

Israel took control of the West Bank, along with east Jerusalem and the Gaza Strip, in the 1967 Mideast war. The Palestinians want all three territories for their future state, but the Trump plan would leave them with scattered clusters of enclaves surrounded by Israel. Most of the international community is opposed to annexation, which many fear would make it impossible to create a viable Palestinian state. A two-state solution based on the 1967 lines is still widely seen as the only way of resolving the decadeslong conflict.

Palestinians say any annexation would put an end to their hopes of an independent state alongside Israel, the so-called two-state solution.

Turkey's presidential spokesman called on the international community yesterday to take a stand against Israeli plan to annex the West Bank. "We reject Israel's plan to annex the West Bank and call for the world to take a stand against it. Occupation and annexation is a crime," Ibrahim Kalın said on Twitter. Kalın said Turkey will support all steps to be taken against the occupation and annexation of Palestinian land.

Israel is expected to carry out the annexation on July 1 as agreed between Netanyahu and Gantz, the head of the Blue and White party. The plan comes as part of Trump's so-called "Deal of the Century" that was announced on Jan. 28. It refers to Jerusalem as "Israel's undivided capital" and recognizes Israeli sovereignty over large parts of the West Bank. The plan calls for the establishment of a Palestinian state in the form of an archipelago connected by bridges and tunnels. Palestinian officials say that under the U.S. plan, Israel will annex 30%-40% of the West Bank, including all of east Jerusalem.

U.S. Democratic presidential nominee Joe Biden on Tuesday became the latest high-profile figure to oppose Netanyahu's plan to apply Israeli sovereignty to Jewish settlements and the strategic Jordan Valley, which makes up around 30% of the West Bank.

King Abdullah II of Jordan, one of only two Arab states to have signed a peace deal with Israel, warned last week annexation would put it on course for a "conflict" with his country. Britain, Germany and other European governments have also come out in firm opposition to the annexation plans. Former Israeli ambassador to Jordan, Oded Eran, said Israel was wary of jeopardizing relations with the king.