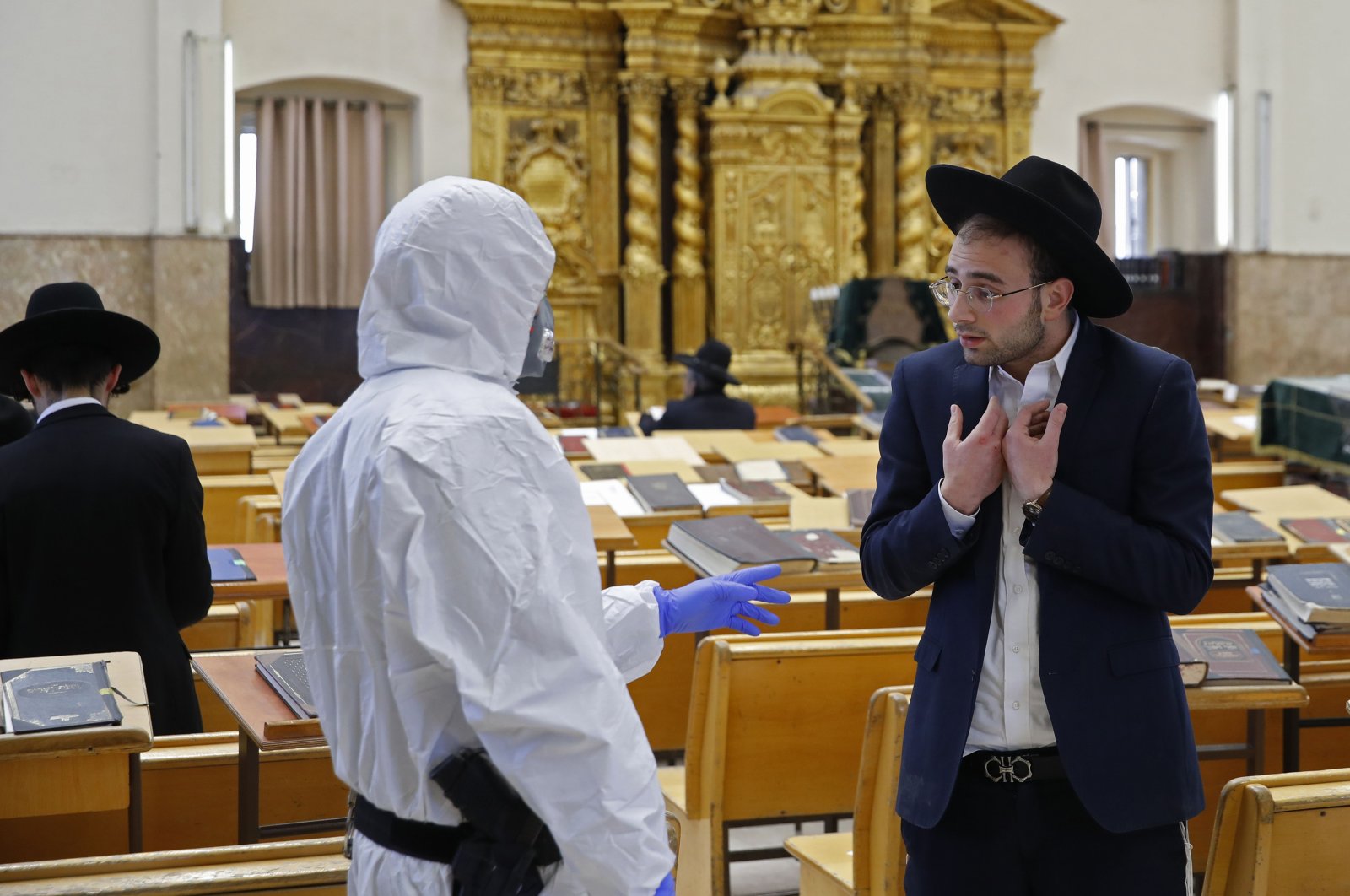 An Israeli police officer, dressed in a protective outfit, speaks to a Yeshiva (Jewish educational institution for studies of traditional religious texts) student, in the Israeli city of Bnei Brak on Thursday, April 2, 2020, during a control to enforce social distancing measures imposed by Israeli authorities to curb the spread of the novel coronavirus. (AFP Photo)
by Agencies Apr 03, 2020 11:43 am
RECOMMENDED

Early this week, the streets of the central city near Tel Aviv were bustling with shoppers as ultra-Orthodox residents, obeying their religious leaders, ignored pleas to stay home in the face of the coronavirus threat. By Friday, Bnei Brak had become the country's worst hot spot and now resembles a ghost town. One expert estimated that nearly 40% of the city's population might already have been infected.

Earlier in the day, police patrols were already out in large numbers to make sure residents remained indoors. Police were out early on Friday erecting barricades around the city.

"Bnei Brak is on lockdown, as of this morning, and police will prevent any movements in or out of the city," police spokesman Micky Rosenfeld said.

"People are only allowed in or out for medical reasons or medical support," he added.

Streets normally crowded with Passover shoppers were deserted. Police in white hazmat suits raided a synagogue, sending some 15 worshippers home with fines of over $100 each. One police car broadcast stay-home appeals in Yiddish, a European language still common in ultra-Orthodox circles.

The city has become a lightning rod for anger and frustration by some secular Israelis who allege insular Haredi communities — with disproportionately high numbers of confirmed cases — are undermining national efforts to contain the virus.

The pandemic also has threatened to upend deep-seated customs in the religious world, including blind obedience to religious leaders and the belief that religious studies and traditions take precedence over the rules of a modern state.

The crisis is rooted in a combination of factors. Israel’s ultra-Orthodox tend to live in poor, crowded neighborhoods where sickness can quickly spread. Synagogues, the centerpiece of social life, bring men together to pray and socialize in small spaces.

“I am very, very concerned that we’ll see a broader contagion in the ultra-Orthodox community and to the broader Israeli population,” said Hagai Levine, a Hebrew University professor who chairs the Israeli Association of Public Health Physicians.

Since Israel's founding, secular and ultra-Orthodox Israelis have viewed each other with suspicion, and tensions have erupted repeatedly over hot button issues such as the military draft. Ultra-Orthodox leaders have used their considerable political leverage to help maintain the community's insular lifestyle with government grants, feeding secular complaints that the haredim are a burden to the collective.

A new debate erupted Thursday when Health Minister Yaakov Litzman, a powerful ultra-Orthodox politician meant to lead the battle against the virus, was confirmed to be infected.

This forced Prime Minister Benjamin Netanyahu, the ministry’s director general and reportedly the head of the Mossad spy agency, into quarantine because of exposure to Litzman. Netanyahu, who tested negative, went through an identical experience after a previous exposure to an infected ultra-Orthodox aide.

Channel 12 TV said ministry officials were furious with Litzman, who had resisted calls in recent weeks to impose restrictions on gatherings at religious institutions. The channel said Litzman had quietly been breaking the rules and attending prayer sessions at synagogues.

“An outbreak in Bnei Brak is the same as an outbreak in Tel Aviv. Litzman did not just betray his own voters. He betrayed all Israelis,” Zehava Galon, a former leader of the secular Meretz party, wrote in the Haaretz daily.

When Israel began shutting down schools, workplaces and its international airport last month to slow the outbreak, Litzman was not the only religious leader to resist.

In recent weeks, attempts by police to enforce quarantine orders in Bnei Brak and religious neighborhoods of Jerusalem resulted in standoffs with angry crowds. Some shouted “Nazis” as police arrested or fined violators.

Police say officers have been assaulted multiple times and several paramedics have been injured by ultra-Orthodox crowds.

In recent days, defiance has subsided as the scale of the outbreak became clear. Kanievsky, 92, now urges followers to stay at home.

For most people, the virus causes mild or moderate symptoms, such as fever and cough. But for others, especially older adults and people with existing health problems, it can cause severe symptoms like pneumonia that can be fatal.

Israel has over 7,030 reported cases, with 37 deaths. Jerusalem and Bnei Brak, home to large ultra-Orthodox communities, have the largest concentrations.

Ran Saar, who runs the Maccabi Healthcare Services, a leading provider, told parliament he estimates some 75,000 people in Bnei Brak, or 38% of the population, could be infected. He said the city has many elderly residents and called for urgent action. The town could soon account for as many as 30% of cases in Israel's 8.7 million population. About 12% are considered Orthodox Jews.

This is due to Bnai Brak's population density, which Israeli officials say is almost 100 times higher than the national average. Many residents are poor and some have heeded rabbis who, distrusting the state, spurned anti-virus measures.

With the elderly especially prone to the illness, Israel's military plans to evacuate 4,500 people aged 80 and above in the town, and place them in isolation in hostels requisitioned by the armed forces.

Saar said his estimates were based on test data. He told Channel 12 that he believes thousands of people are refusing to be tested because they don't want to disrupt next week's Passover holiday.

Anshel Pfeffer, a commentator at Haaretz, said the crisis presents a major challenge to the rabbis' traditional authority and the ultra-Orthodox way of life.

“The community was already facing challenges before the coronavirus crisis,” he said. “But this is certainly bringing a lot of these challenges to a head.”