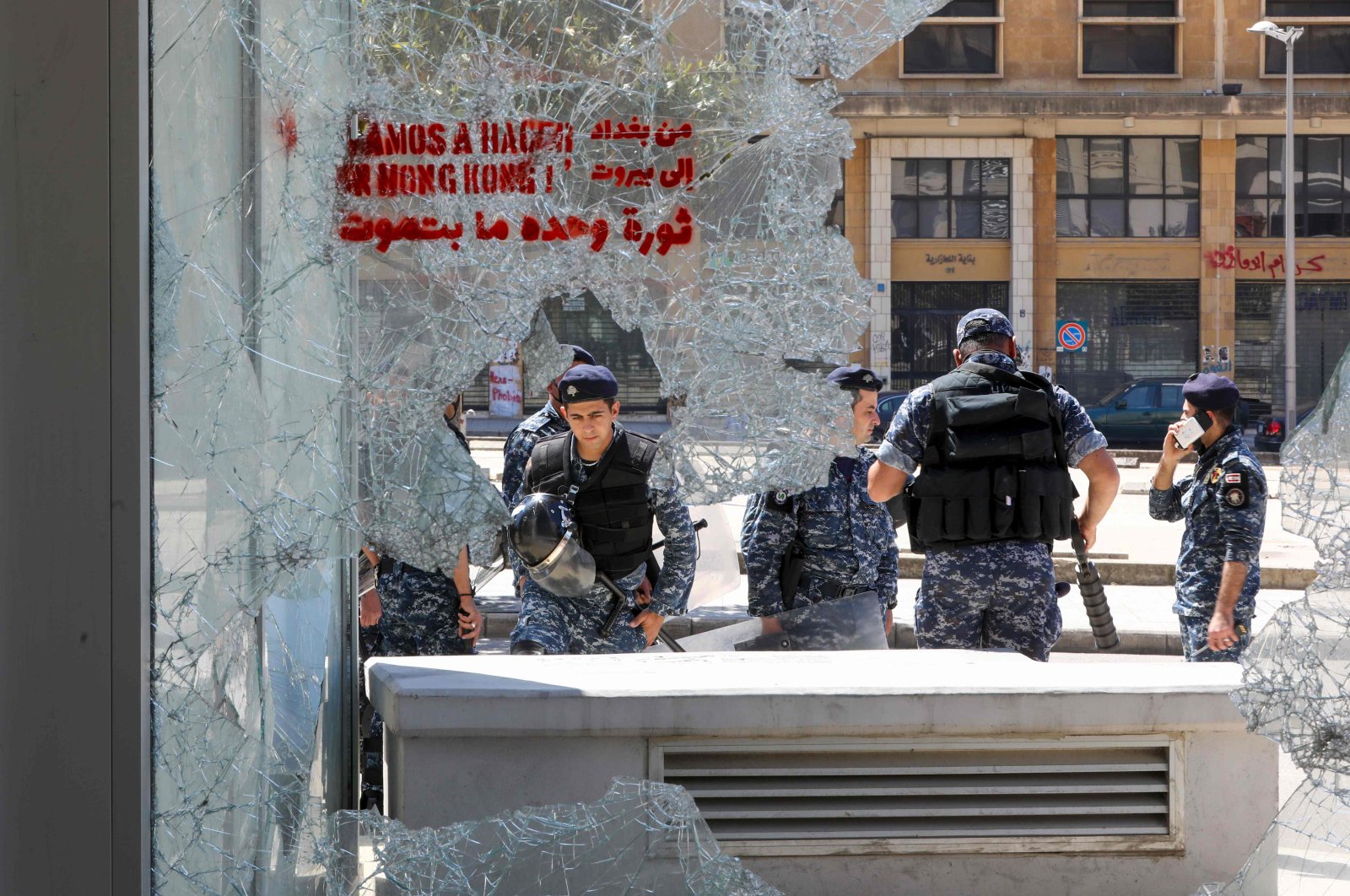 Members of the Lebanese security forces are seen through a broken store window in the downtown area of the capital Beirut, during an anti-government demonstration marking International Workers' Day (Labour Day), on May 1, 2020. (AFP Photo)
by ASSOCIATED PRESS
May 01, 2020 6:59 pm

Hundreds of Lebanese citizens rallied Friday outside the central bank in Beirut and elsewhere in the country, a day after the prime minister said he will seek a rescue program from the International Monetary Fund (IMF) to deal with a spiraling economic and financial crisis.

The protesters decried the authorities for their handling of the unprecedented crisis that saw the local currency crash, devastate their savings and send prices and inflation soaring. Scuffles broke out outside a private bank and troops were seen beating and pulling away at least one protester.

The government "is not even providing the most basic needs," said a protester in Beirut, Ahmad Demashqia. There were also rallies in northern and southern Lebanon that commemorated May Day, international Labor Day.

Lebanese Prime Minister Hassan Diab, who on Friday signed the official request for assistance from IMF, said the government has taken "the first step on the path to saving Lebanon from the deep financial pit." On Thursday, the Cabinet adopted a long-awaited rescue plan.

But the protesters seemed skeptical. In the southern city of Sidon, 19-year-old Omar al-Mughrabi said the country needs radical change – not reform of failing or ineffective policies.

"Going to the IMF is not the solution," al-Mughrab said "We don't need any more debts than we already have.”

Lebanon, one of the most indebted nations in the world, defaulted for the first time in March on its sovereign debt. Anti-government protests that erupted in October subsided during a nationwide lockdown since mid-March to slow the spread of the coronavirus. Lebanon, a country of 5 million people, has reported only 729 cases and 24 deaths, and began to ease some virus restrictions this week.

Many, but not all, of the protesters wore face masks to protect against the virus.

But the lockdown also worsened the recession's sharp bite, increasing unemployment and popular resentment. In recent days, protesters ignored social distancing measures and calls to stay home to rally outside the central bank and private banks, setting off clashes with the security forces and the army. In the northern city of Tripoli, a protester was killed earlier this week.

Prices of basic goods have increased, in some cases by over 60%. The Lebanese pound, pegged to the dollar for 30 years, lost nearly 60% of its value.

With a stable national currency, the Lebanese had used their pound and the dollar interchangeably, many keeping their savings in dollars. To deal with a liquidity crunch and a massive imports bill, the central bank decreed that most withdrawals could only be in the local currency. The decision further weakened the pound, sending it plunging on the black market to nearly three times the official rate.