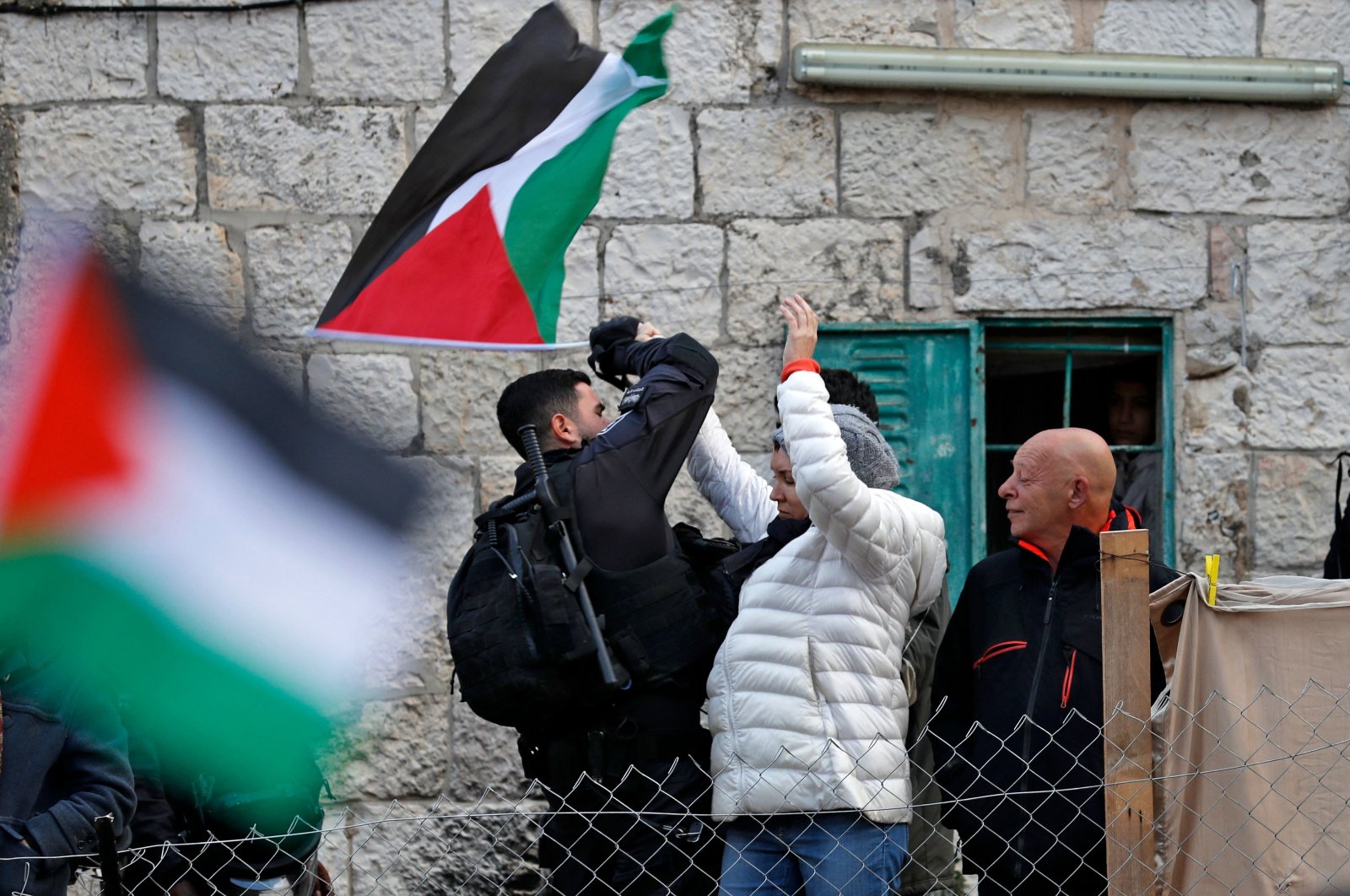 A Palestinian resident scuffles with a member of Israeli security forces during a demonstration in the east Jerusalem neighbourhood of Sheikh Jarrah, East Jerusalem, December 17, 2021. (AFP Photo)
by DAILY SABAH WITH AGENCIES Dec 19, 2021 12:19 pm

Hard-line Israeli settlers took to the streets in Jerusalem, shouting slogans about killing Palestinians and burning their villages

Tensions across the occupied Palestinian territories have been flared up again, with dozens of right-wing Israelis holding demonstrations in Jerusalem under the slogan "Death to Arabs" and orchestrating numerous attacks on Palestinian homes.

"Death to Arabs. May your village burn" chants resonated in Jerusalem on Saturday as protesters denounced the Israeli government for its response to the attack that claimed the life of a 25-year-old yeshiva student.

According to The Times of Israel, some 13 Israeli settlers were arrested during demonstrations, including one person possessing a number of "weapons." In a series of footage from the protest Saturday, Israeli settlers can be heard yelling “death to Arabs” while waving Israeli flags.

The calls to destroy Palestinian homes are not new and had been launched earlier. The latest attack took place in the occupied West Bank where Israeli settlers have attacked scores of Palestinian homes in the last two days in the city of Nablus. Ghassan Daghlas, an official in charge of the settlement file in the northern West Bank affiliated with the Palestinian Liberation Organization (PLO) told Anadolu Agency (AA) about the escalating attacks.

He said settlers attacked 40 Palestinian houses in Nablus and noted the attacks have intensified in villages around Nablus. Daghlas pointed out that the settlers used weapons, stones and sticks in the attacks.

There are more than 250 illegal Israeli settlements in the West Bank, which Israel occupied in 1967. More than 500,000 settlers make life more difficult for Palestinians living under the occupation.

"This is just one of dozens of Palestinian homes that were attacked by (Israeli) settlers who reportedly attempted to burn these homes, chanting “death to Arabs,” all while under the protection of the IOF," he wrote referring to Israeli Occupation Forces. "We've seen this in history before, and the world was silent about it then."

Meanwhile, dozens of Israeli settlers blocked a section of road 60 east of the city of Hebron, south of the occupied West Bank, and pelted Palestinian vehicles along the road with stones.

On Friday, United Nations Middle East peace envoy Tor Wennesland said he was "alarmed by the escalating violence in the occupied West Bank, including East Jerusalem, which is claiming the lives of Israelis and Palestinians."

The attacks and right-wing protests came after Israeli police said that four Palestinian men were suspected of shooting dead an Israeli settler and wounding two others in the occupied West Bank days before. Israeli officials said all four were arrested on Sunday.

The four are suspected of firing at least ten bullets at a car, killing 25-year-old religious student Yehuda Dimentman and injuring two fellow students as they drove out of Homesh, an illegal outpost in the northern West Bank.

The army said the suspects were caught in the village of Silat al-Harithiyah, in the Jenin governorate in the northern West Bank.

The footage of recent right-wing protests in Jerusalem triggered a major outcry on social media, with Twitter users lashing out on racist and "fascist" calls to burn Palestinian villages and the "Death to Arabs" slogans.

Some of them criticized the Western media for bias and failure to cover the demonstrations where Islamophobic rhetoric was echoed.

"Western media appears to be entirely deaf to the fascist genocidal chant of “Death to Arabs” when uttered by violent colonial settlers enacting apartheid & genocide upon Palestinians," another Twitter user wrote under El-Kurd's tweet.