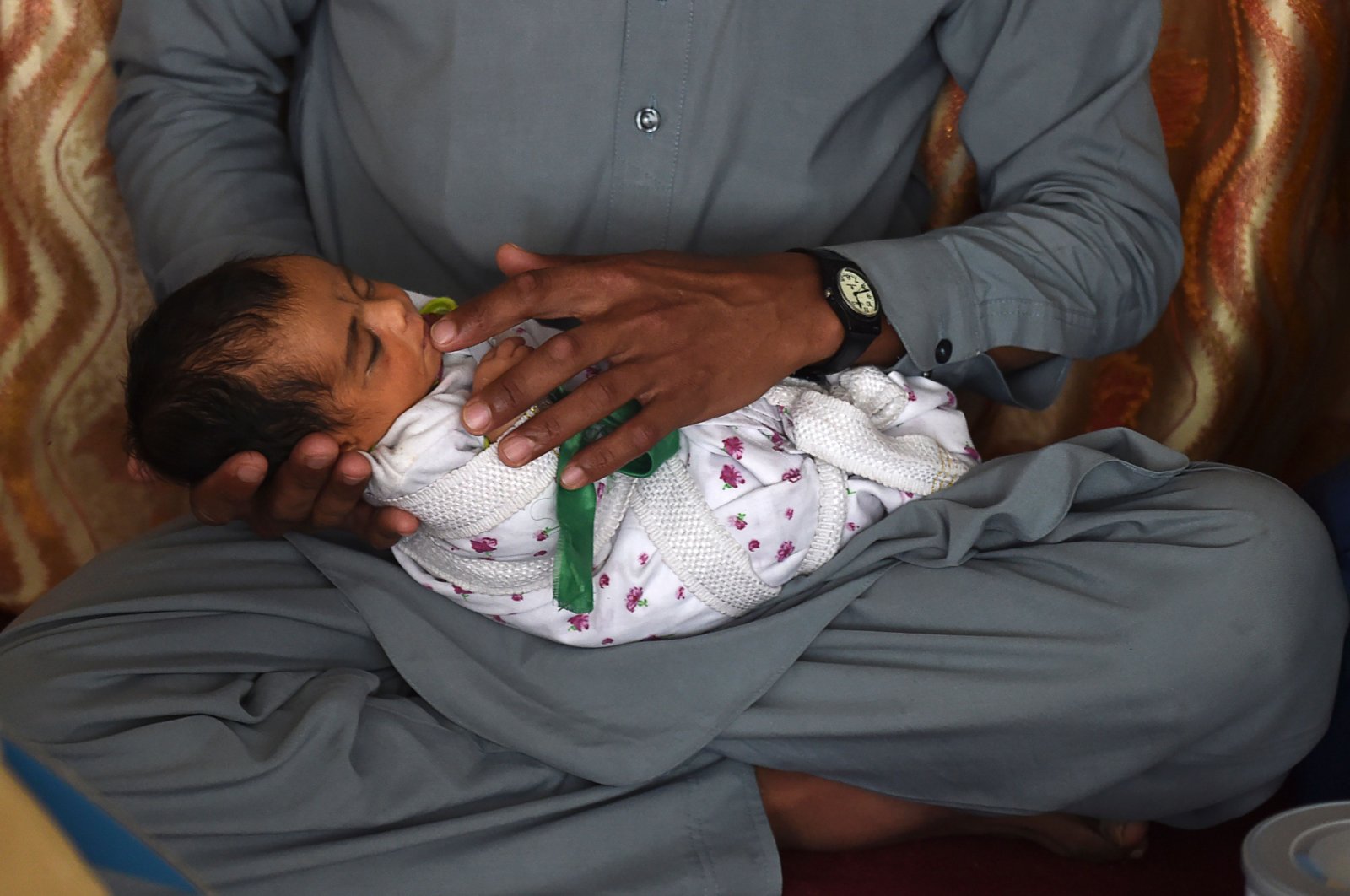 Hasan Ali, 32, and his newborn daughter, Roya, survivors of an attack by militants on a maternity ward in Kabul, sit in their home after receiving relief aid from a charity on the outskirts of the capital city, Kabul, May 22, 2020. (AFP Photo)
by French Press Agency - AFP May 25, 2020 1:07 pm
RECOMMENDED

Zia Gul gave birth to her daughter hours after escaping from gunmen who rampaged through a Kabul maternity ward and now struggles to reconcile the joys of early motherhood with the trauma of the attack.

As she delights in the first days with her new daughter Roya, the sleepless nights familiar to any new parent are haunted by the gruesome May 12 attack that killed at least 24 people.

"I have nightmares every night," the 28-year-old said, sitting on a carpet in her Kabul home, cradling her sleeping daughter in her lap.

Newborns, mothers and nurses, were killed when gunmen posing as members of the security forces rampaged through the facility run by Doctors Without Borders (MSF) in an attack that shocked a country long accustomed to brutality after decades of war.

Afghan President Ashraf Ghani later pinned the blame on the Taliban, who denied any involvement, while the United States accused Daesh.

No group has claimed responsibility for the massacre.

"Whenever I hear a loud sound or firecrackers, I think the attackers have come to kill me," said Zia Gul from her home in an impoverished Kabul neighborhood. "The attack came suddenly, the attackers started shooting the babies and women giving birth." As the militants went on their killing spree – described by the MSF as "a systematic shooting" – doctors at the hospital helped Zia Gul and others hide.

She later managed to escape and was evacuated by security services to another facility. An hour later, her daughter Roya was born, a blessing after suffering an earlier miscarriage. But the joy was dulled – her mother-in-law, who had come with her to the hospital, was killed in the attack.

'Could not recognize her face'

Akram, 40, who only gave his first name, vividly recalls the aftermath of the horrific attack that killed his wife shortly after she had given birth to their daughter, Maryam. Approaching the hospital bed where her body lay, he did not know the woman lying there was his wife. "I recognized her from her feet," he said. "I could not recognize her by her face when I saw her." He had no idea his new daughter was alive until he saw a Facebook post saying she had been evacuated to another hospital, with an accompanying picture and phone number.

For many of the new parents – many from poor neighborhoods in Kabul – the aftermath of the massacre has made it even harder to make ends meet.

Zia Gul's husband is deaf, making it difficult for him to find work in normal times, she said, adding that a lockdown imposed on the capital to combat the coronavirus has made earning money even harder.

Nearly a dozen families who bore the brunt of the attack are surviving on aid given by the Relief and Emergency Fund for Afghanistan (REFA), a campaign group. The group is helping by donating food, as well as diapers and powdered milk for the newborns, said its head Behzad Ghazi.

How and who will help the survivors overcome the trauma in the long run is another question, said Lyla Schwartz, a psychologist counseling some of the victims and founder of Peace of Mind Afghanistan, a nongovernmental organization (NGO).

Their families are often unable to afford the mental health providers and the "psychological help they need to heal," she said.

Akram, who runs a shop, has two other sons aged 6 and 7 and an elderly mother to take care of and is worried about how he will raise his youngest child. "I think (my mother) does not have the ability to take care of the child," he said.