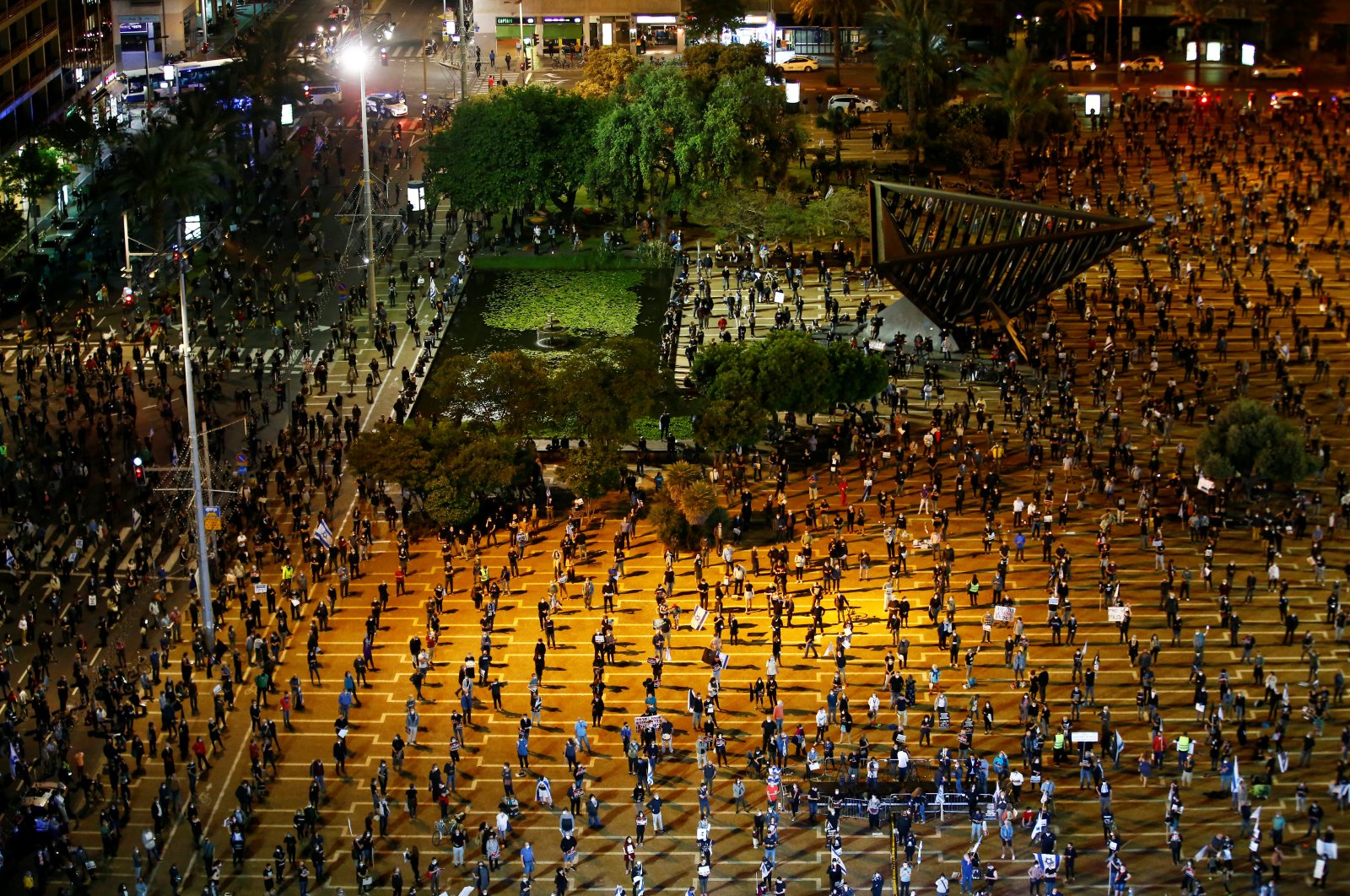 Israelis demonstrate against Israel's Prime Minister Benjamin Netanyahu, under strict restrictions made to slow down the spread of the coronavirus, in Rabin Square in Tel Aviv, Israel, April 19, 2020. (Reuters Photo)
by compiled from agencies Apr 20, 2020 12:49 pm
RECOMMENDED

Thousands of Israelis demonstrated Sunday in Tel Aviv by observing social distancing rules to warn against what they said was a threat to democracy from ongoing coalition talks between Prime Minister Benjamin Netanyahu and his former rival Benny Gantz.

Some 2,000 protesters, according to media estimates, followed a call launched on Facebook for the "Black Flag" movement, which condemns Netanyahu's continuing rule.

Israel's parliament was tasked with forming a government on Thursday after speaker Gantz and Netanyahu missed a deadline to seal an alliance, but negotiations between the sides were ongoing.

Gantz and Netanyahu could still agree on an emergency unity government to help Israel confront the COVID-19 pandemic, a prospect the protesters spoke out against.

Wearing protection masks and mostly dressed in black, the protesters observed social distancing rules in force to fight the coronavirus.

"Let democracy win," said one placard, while some protesters had written "Minister of Crime" on their masks, an apparent reference to Netanyahu's upcoming trial for corruption.

Many waved black flags as a symbol of threats against Israel's democracy.

"You don't fight corruption from within," said Yair Lapid, the new opposition leader, of his former ally Gantz. "If you're inside, you're part of it."

No result from unity talks

Meanwhile, coalition talks between Netanhayu and Gantz ended Monday without a coalition deal.

A statement from Netanyahu's right-wing Likud party said that efforts to form an emergency unity government "at the earliest opportunity" would continue after Israel's Holocaust Remembrance Day, which ends on Tuesday after sunset.

In Israel, judges are appointed by a nine-member committee that includes Supreme Court judges, two ministers and two lawmakers.

The sides are still in dispute over one of the lawmakers' spots on the committee, Channel 12 said.

Although Likud and Gantz' centrist Blue and White party have until May 7 to finalize a deal, Monday morning, before the start of a Knesset session, had been seen as a symbolic deadline.

Gantz had threatened that if Netanyahu were not serious about finalizing a deal, he would submit a bill that would bar anyone with an indictment from forming a government.