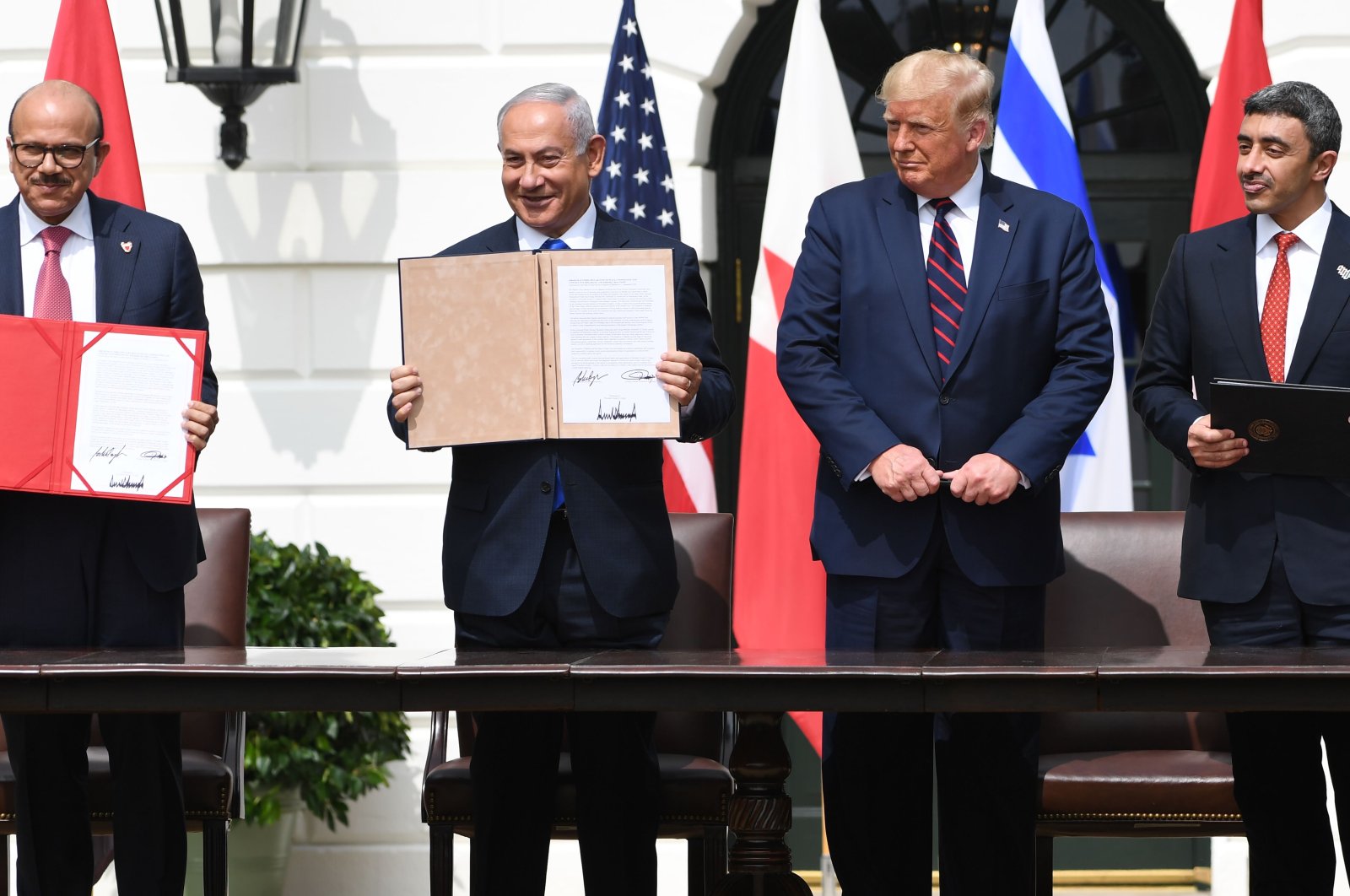 Israel normalized relations with long-time foes Bahrain and the United Arab Emirates (UAE) at a White House ceremony Tuesday as President Donald Trump said similar U.S.-brokered deals were close between the Jewish state and "five or six" other nations.

Israeli Prime Minister Benjamin Netanyahu and the foreign ministers of Bahrain and the UAE sealed the historic agreements with a signing ceremony on a flag-decorated White House lawn.

Hundreds of guests attended the event despite the coronavirus pandemic but there were no ceremonial handshakes to cement the agreements.

Bahrain and the UAE are the first Arab nations to establish relations with Israel since Egypt in 1979 and Jordan in 1994 and Trump, who is hoping the deals will boost his reelection hopes, hailed it as a "historic day for peace in the Middle East."

"After decades of division and conflict we mark the dawn of a new Middle East," Trump said. "We're here this afternoon to change the course of history."

He said the agreements "will serve as the foundation for a comprehensive peace across the entire region" and "there will be other countries, very, very soon."

Speaking to reporters before the ceremony, Trump said "we'll have at least five or six countries coming along very quickly."

Trump did not name the additional countries but hinted during a meeting with UAE Foreign Minister Abdullah bin Zayed Al-Nahyan that Saudi Arabia may be on board.

"We've had great talks with Saudi Arabia. I think their mind is very open," Trump said.

Netanyahu called the day a "pivot of history."

"It heralds a new dawn of peace," he said. "Ultimately it can end the Arab-Israeli conflict once and for all."

"Thank you for choosing peace and halting the annexation of Palestinian territories," he said in one of the rare references to the Palestinians during the event.

For the Middle East, the deals – dubbed the Abraham Accords – mark a distinct shift in a decades-old status quo where Arab countries have tried to maintain unity against Israel over its treatment of the stateless Palestinians.

In his remarks, Bahrain Foreign Minister Abdullatif al-Zayani stressed the need for a "two-state" solution to the Palestinian-Israeli conflict.

Trump, speaking to Fox News ahead of the ceremony, said the agreements would put pressure on the Palestinians to also come to the negotiating table or they would be "left out in the cold."

"The Palestinians will ultimately come in too," he said.

Trump predicted that Iran – a regional rival to Bahrain and the UAE – would seek to make a deal with the United States if he is reelected.

All the four countries at the White House share a common hostility to Iran, which Trump has put under crippling economic and diplomatic pressure.

The thaw will also give Israel and its two new Arab partners a big economic opening, just when they are looking to rebuild after the international slowdown triggered by the pandemic.

Trump enjoyed the optics of presiding over a historic breakthrough less than 50 days before election day, which opinion polls suggest he is currently on course to lose.

Netanyahu, a close Trump ally who faces a corruption trial and criticism over his handling of the coronavirus pandemic, could also use a dose of good news coverage.

The UAE, meanwhile, has been using the negotiations as part of its campaign to pressure Washington to sell it the cutting edge F-35 warplane.

Trump said Tuesday he was willing to sell the warplanes to the UAE despite Israeli opposition.

"I would have no problem in selling them the F-35," he told Fox News, adding that it would mean "tremendous jobs at home."

The UAE is eying the stealth fighter jet as a component in its ambitious plans to make the small, wealthy country into a regional military power.

Ahead of the signing ceremony, hundreds of Palestinians protested Tuesday against the normalization deals with Israel.

Clutching Palestinian flags and wearing blue face masks for protection against the novel coronavirus, demonstrators rallied in the cities of Nablus and Hebron in the occupied West Bank and in the Gaza Strip.