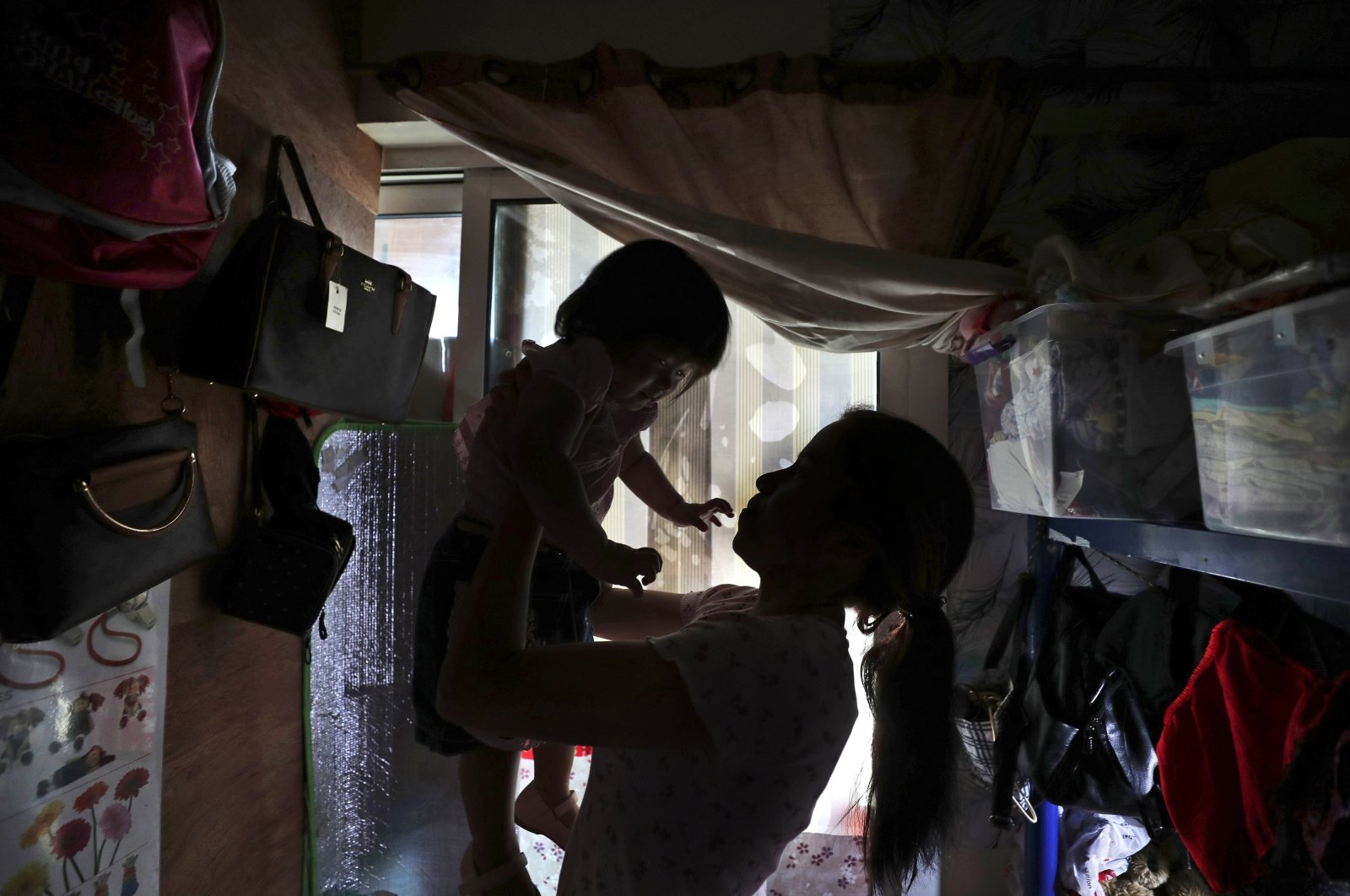 Maya, 36, plays with her 1-year-old undocumented daughter in a dank, overstuffed section of an apartment, subdivided by hinged partitions, that she shares with eight other women, in Dubai, United Arab Emirates, Nov. 24, 2021. (AP Photo)
by ASSOCIATED PRESS Dec 13, 2021 12:44 pm

The United Arab Emirates have yet to fulfill their promise after overturning a law in a bold expansion of personal freedoms for unwed mothers, who are now fighting to obtain birth certificates for their 'invisible' babies

Unwed mothers in the United Arab Emirates (UAE) may no longer face jail time after the overturning of a law decriminalizing premarital sex, but they are still caught in bureaucratic limbo, fighting to obtain documents for their babies born in the shadows.

An incident, described by one of the women, was among the first concrete signs that the UAE had taken steps in an overhaul of its Islamic penal code: Over a dozen unmarried women were huddled in a jail cell south of Dubai last year, locked up for the crime of giving birth, when a guard entered and declared them free.

Although unwed mothers no longer face jail after the UAE legalized premarital sex in November 2020, they now face a maze of red tape.

The new law that comes into effect in two weeks still does not offer unmarried women a clear path to acquiring birth certificates for their babies. At the same time, the law criminalizes women lacking such documents.

Obtaining birth certificates for their babies is a costly process that the country's poorest residents – foreign workers who clean offices, serve food and care for the children of other mothers – cannot afford. Expats outnumber locals by nearly nine to one in the Emirates.

"We were so full of hope," said Star, one of those released from Sharjah Central Jail in December 2020 with her 3-month-old daughter. "Then came trouble I didn't think I'd have the strength to get through." Star gave only her first name for fear of reprisals.

She and six other unmarried women, most of them Filipinas, described their legal battles to The Associated Press (AP).

Before last year's law change, several had given birth at hospitals, where health authorities denied them birth certificates and called the police. Others withdrew to their shared apartments, scared and alone, to have their babies.

In the UAE, hospitals issue birth certificates only to married parents. Without the certificates, children are unable to receive medical care, attend school or travel. Their mothers, who lost work and residency during prosecution under the old law, become stranded. The number of undocumented children in the UAE is not known.

Lawyers say the obstacles stem from an enduring conservative mindset and lack of government coordination.

Some women even yearn for the previous punishment, typically one-year detention and deportation. While terrifying, it at least guaranteed a flight home and identity documents for their children.

"It has only gotten harder since the law changed," said 25-year-old mother Sitte Honey. "They won't take you to jail and they don't want you to give birth," she added, noting abortion is also forbidden. "We're stuck."

Dirar Belhoul al-Falasi, a member of the UAE's advisory Federal National Council, argued last year's decriminalization had an impact. "Prior to this, there was nothing in my hand to legalize what they have," he told the AP. "But now, there is a law ... that we can help them with."

Under a new law that comes into force on Jan. 2, parents who fail to document their children face a minimum of two years in prison. It makes no reference to health authorities issuing birth certificates to single mothers. The law demands that parents marry or acquire travel documents and other paperwork to prove their children's identities, without detailing how.

That has stoked panic among unmarried mothers who fear further punishment.

Last year, as lawyers scrambled to understand the opaque legal code, women like Star walked out of jail across the country. Conditions at the facilities varied and in some, mothers were separated from their children.

Star said her daughter was taken from her during detention. She said 15 women shared a single bathroom, subsisted on only rice and bread and were let out 30 minutes each day for fresh air. Other women described police interrogations about their sexual history as deeply humiliating.

But after these women were freed, they still couldn't get the one thing they wanted most: identity documents.

Maya, a 36-year-old mother, turned herself into authorities in November 2020 when she heard it would help her get a birth certificate for her 1-year-old. After several torturous weeks in Dubai's Al Qusais Police Station, authorities became alerted to the law change and freed her. But they never granted legal status to her daughter, forcing her to ricochet from one government office to another in her quest.

"These massive fundamental changes are highly welcome, but so much still needs to catch up," said Ludmila Yamalova, managing partner of LYLAW, a firm taking on cases of unwed mothers.

"Emotionally and mentally, people are not prepared to accept the law as reality," she added, referring to health and law enforcement agencies.

Noraida Gamama, desperate to document her 3-year-old daughter, has plastered the door of her Sharjah apartment with signs warning her half-dozen roommates to check the peephole before answering to ensure it's not a government official.

Living on expired visas and struggling to feed infants on wisps of income, many can't afford court fees and lawyers' bills. It costs over $350 to open a birth certificate petition case independently at Dubai's Family Court.

Ann, 36, works multiple part-time jobs, sleeping a few hours a night, to feed her undocumented 2-year-old girl. She recounted the agony of delivering her on the floor of a rented Dubai room. "All I want is to give her a name, to bring her back to the Philippines where she could live a better life," Ann said.

Still, a growing number of women are taking their cases to court, with mixed success. A clerk at one Dubai court said the system handled over 50 "baby cases" daily.

When Honey discovered she was pregnant with her boyfriend's child two years ago, she appealed to the Philippine Consulate to send her home. But while waiting for help that never came, baby Naya was born in her tiny apartment.

Lacking legal status after fleeing abusive employers who confiscated her passport, Honey has grown desperate to get out of Dubai. But authorities cannot repatriate her until Naya gets papers.

"This is a nightmare. No money, no visa, no rent, no plan," Honey said.

To hasten her return, Honey's 47-year-old mother moved to Qatar as a housemaid, pulling together the money needed to open a case in Dubai last month. She's still waiting for her first hearing and trying to get a written acknowledgment of paternity from her ex-boyfriend.

The process requires an unwed mother to provide a ream of personal documents, take a DNA test and testify before a judge. If the judge approves, the mother may request her child's birth certificate.

Some, like Star, have persevered and made it through.

"That kind of joy is overwhelming, to know your daughter is not illegal anymore," Star said from her family's home in Davao City, Philippines. "It's like I'm breathing for the first time."