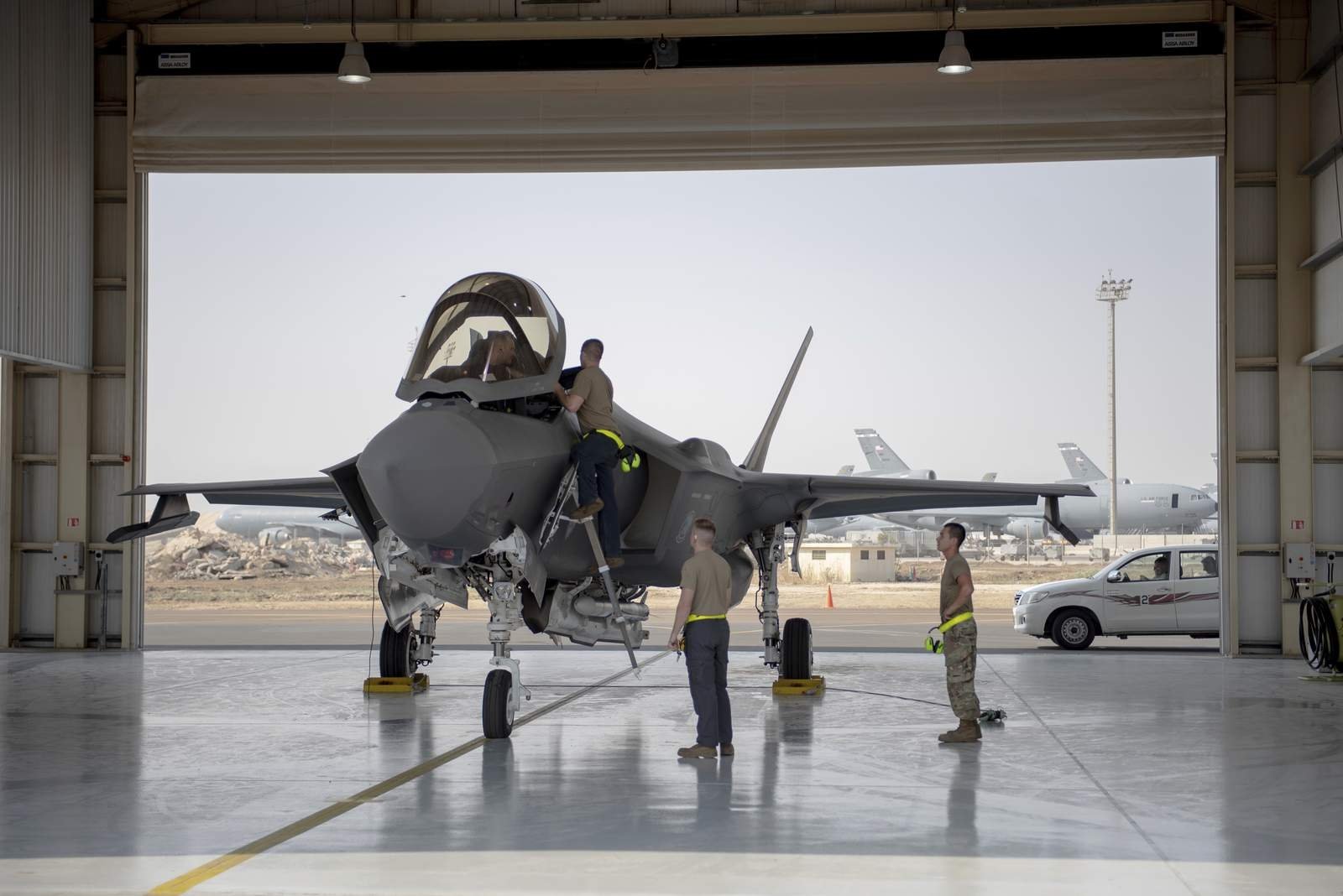 An F-35 fighter jet pilot and crew prepare for a mission at Al-Dhafra Air Base in the United Arab Emirates in this 2019 photo. (AP Photo)
by DAILY SABAH WITH AGENCIES Dec 01, 2020 12:52 pm
RECOMMENDED

Twenty-nine arms control and human rights organizations have signed a letter opposing the sale of $23 billion worth of missiles, fighter jets and drones to the United Arab Emirates (UAE) and asking the U.S. Congress to block the deal amid growing concerns about the Gulf state's role in Libya and Yemen conflicts.

"The hope is to stop these sales altogether," said Seth Binder, advocacy officer at the Project on Middle East Democracy, who spearheaded the effort, as quoted by Reuters. "But if that is not possible in the short term, this sends an important signal to the incoming Biden administration that there is a diverse group of organizations that oppose delivery of these weapons."

The letter from the rights groups said the planned arms sale would fuel continued harm to civilians and exacerbate humanitarian crises due to conflicts in Yemen and Libya. Signatories include human rights organizations from the region, including the Cairo Institute for Human Rights Studies and Mwatana for Human Rights.

The sale was approved following a U.S.-brokered agreement in September in which the UAE agreed to normalize relations with Israel. Three U.S. senators earlier this month proposed legislation to halt the sale, which includes drones from privately held General Atomics, Lockheed Martin Corp F-35s and missiles made by Raytheon, setting up a showdown with President Donald Trump weeks before he is due to leave office. U.S. law allows senators to force votes on resolutions of disapproval on major arms deals. However, to become effective resolutions must first pass both the Senate and the House of Representatives. The measure would also need two-third majorities in both the Republican-led Senate and Democratic-led House to survive a presidential veto.

In Libya, regional countries which based their interests on putschist Khalifa Haftar and his control over the country by force, raised their opposition to the agreements between Turkey and Libya, while Haftar intensified his armed attacks on the capital Tripoli before the agreement became effective.

During this period, reports saying mercenaries affiliated with the Russian private security company Wagner Group were involved in Haftar's ranks also became frequent. In a move that would likely complicate the U.S. relationship with its one of the closest military allies in the Middle East, the UAE has helped to finance the Wagner Group in Libya, the U.S.-based news publication, Foreign Policy, reported on Monday based on a report issued last week by the Pentagon’s inspector general for counterterrorism operations in Africa.

Besides the support from Wagner Group, the unmanned combat aerial vehicles (UCAVs) provided by the UAE strengthened Haftar's air dominance, helping him increase his attacks on Tripoli, including civilian settlements. Hundreds of civilians were killed in these attacks. Hundreds of thousands of civilians who fled their homes because of the war started to take refuge inside Tripoli.

In Yemen, The Associated Press (AP) investigations have shown how the UAE negotiated secret deals with al-Qaida and that the Saudi-led coalition forces tortured and sexually abused detainees. The UAE entered Yemen's war in March 2015 alongside Saudi Arabia to back Yemen's internationally recognized government, which the Houthis had pushed out of the capital, Sanaa. The Emirates has largely handled ground operations in the conflict while the Saudis have bombed from the air.