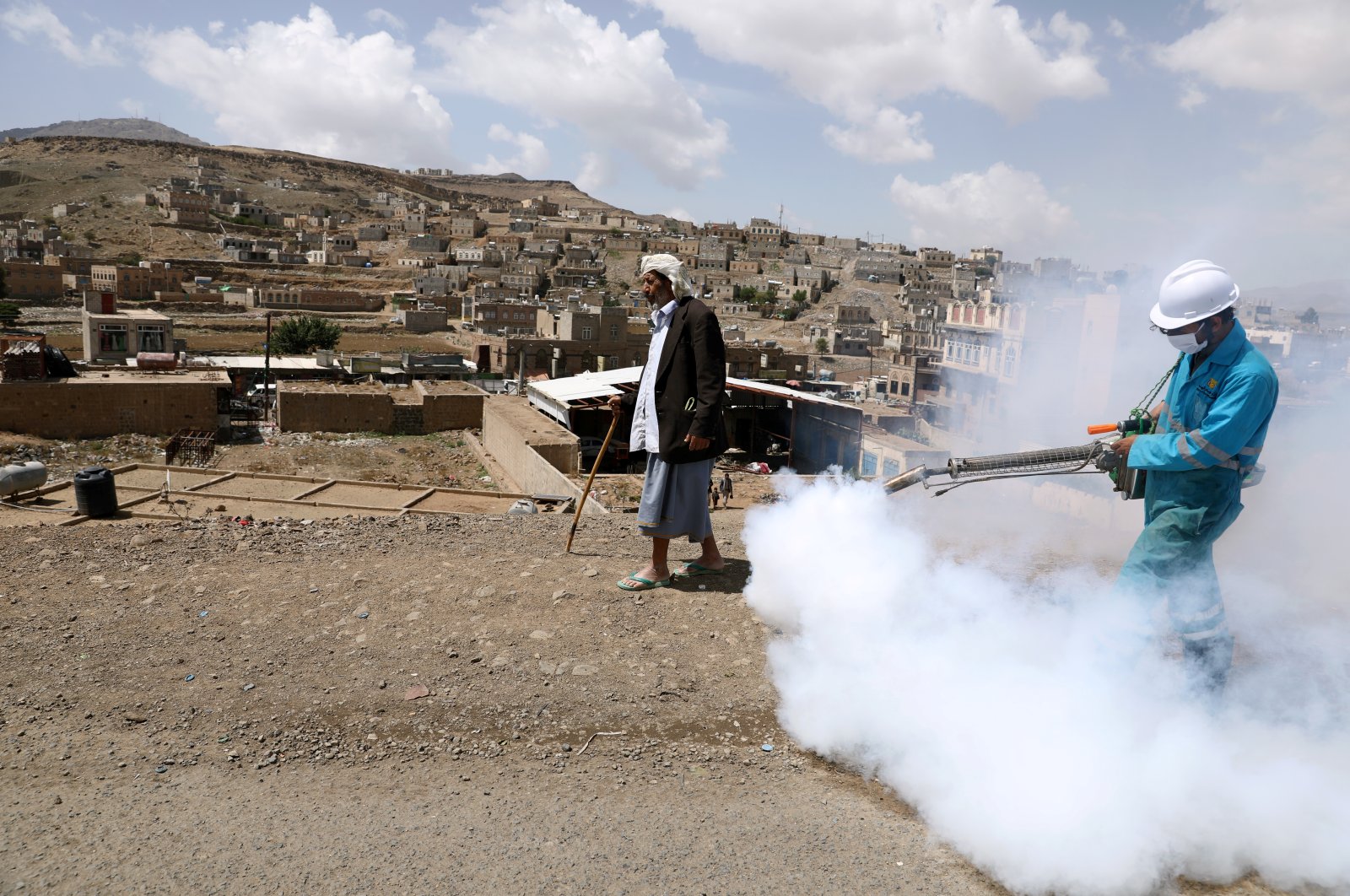 A health worker disinfects residential area during a sanitation campaign to prevent the spread of the coronavirus disease (COVID-19), on the outskirts of Sanaa, Yemen April 13, 2020. Picture taken April 13, 2020. (Reuters Photo)
by REUTERS Apr 15, 2020 3:27 pm
RECOMMENDED

In a hospital in the Yemeni city of Taiz, medics scarred by five years of war are marshaling scant resources to face a new enemy.

The coronavirus epidemic has yet to make clear inroads in Yemen, with the little testing that has been done uncovering just one confirmed case. But aid groups fear that could be a harbinger of a catastrophic outbreak among an acutely malnourished population.

"Even now, before corona arrives ... you would fail to find a ventilator," said Abdulaziz Qassem, part of the coronavirus team at the city's Joumhuriya hospital. "We doctors don't have any protective clothing, and we will be the first line of defense."

Yemen's third-largest city has just four ventilators to treat victims of the respiratory disease, and Joumhuriya's deputy director, Khalil al-Saeed, said its makeshift coronavirus wing has no beds and no functioning bathrooms.

It is one of 37 Yemeni hospitals that the World Health Organization (WHO) and local authorities are rushing to upgrade, in response to a war that has destroyed health, water and sanitation systems and left millions weakened by poverty and disease.

"We will all struggle to provide adequate levels of supportive care to people should the disease take off," the WHO's emergency expert, Mike Ryan, said Monday.

"If the rich countries have not been able to deal with corona, how are we expected to," fretted laborer Abdurrahman Farid, 22, in Aden.

The southern port is the temporary seat of the government backed by a Saudi-led coalition. Its main enemy, Yemen's Iran-aligned Houthi group, holds the capital Sanaa.

The fighting and economic collapse have displaced nearly 4 million people, many to cramped camps with no running water.

Hasina Ali, in her 50s, lives under canvas amid bombed-out buildings in al-Kara'a camp, north of Aden.

"Neither the state nor organizations are helping us. How are we to just sit inside the camp? There are so many of us," she said as children fetched water from tanks pasted with coronavirus awareness posters.

Around 80% of Yemen's population, or 24 million people, require humanitarian aid. Of particular concern are remote areas, where acute malnutrition is rife.

"It will be difficult to respond if the outbreak reaches rural areas, where health facilities barely exist and there is little or no possibility of testing," Doctors Without Borders said.

The medical charity said inadequate testing was probably why Yemen was one of the last countries to register the virus.

Recently arrived kits mean a few thousand can now get tested in three cities, and the WHO is leveraging reporting networks previously used to track cholera and polio outbreaks to investigate rumors of coronavirus cases.

Ventilators are also in short supply nationally, at a few hundred.

"Ventilation is going to be a major, major challenge, and not just the ventilators but more the technicians to run (them)," Ryan said.

In Sanaa's Kuwait hospital, which is training intensive care nurses from other provinces in respiratory medicine, workers slap cement on walls for a coronavirus wing. Dozens of rusty oxygen tanks are lined up to be connected to an air network.

"If they get fixed, they will be the main pillar of the hospital," she said, adding that if needed they could hook more than one patient up to each.