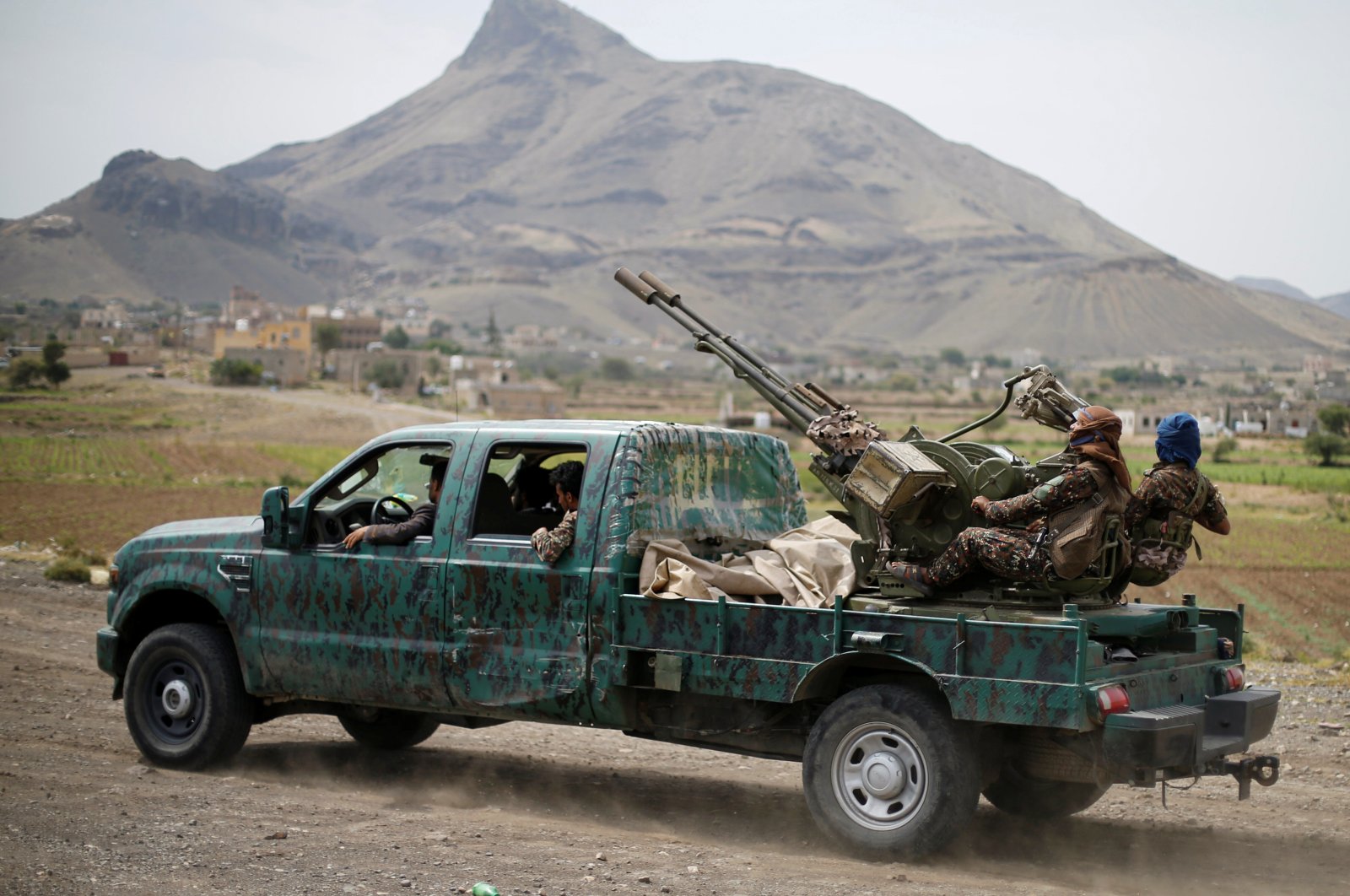 Houthi fighters man a machine gun mounted on a military truck as they parade during a gathering of Houthi loyalists on the outskirts of Sanaa, Yemen July 8, 2020. (Reuters Photo)
by French Press Agency - AFP Jul 12, 2020 5:31 pm
RECOMMENDED

Yemen's Houthi rebels have given U.N. inspectors the green light to inspect a decaying oil tanker abandoned off the coast with 1.1 million barrels of crude onboard which experts say could rupture at any time.

A breach of the vessel would have disastrous results for Red Sea marine life and tens of thousands of impoverished people who depend on fishing for their livelihood.

The 45-year-old FSO Safer is anchored off the port of Hodeida under the control of the Iran-backed Houthi, who have previously blocked efforts to send inspectors to assess its condition.

The U.N. Security Council will hold a special meeting on July 15 to discuss the crisis, after water entered the vessel's engine room "which could have led to disaster," U.N. spokesman Stephane Dujarric said Friday.

Dujarric said prospects had been revived for an inspection team to conduct light repairs and determine the next steps, and a U.N. source said Sunday that the Houthi had agreed to the visit.

"They officially approved the visit of the U.N. assessment and repair team to the tanker," the source told Agence France-Presse on Sunday.

Effectively a floating storage platform, the Safer has had virtually no maintenance for five years since war broke out in the country where the Houthi have seized much of the north from the internationally recognized government.

The Yemen government has warned the Safer could explode and cause "the largest environmental disaster regionally and globally."

Top Houthi leader Mohammed Ali al-Houthi said on Twitter last month that the rebels want guarantees the vessel will be repaired and that the value of the oil on board is used to pay salaries of their employees.

The market value of the oil is now estimated at $40 million, half what it was before crude prices crashed, although experts say poor quality could push it even lower.

Like other economic and aid issues in Yemen, the plight of the tanker has become a bargaining chip, with the Houthi accused of using the threat of disaster to secure control of the value of the cargo.

Yemeni Prime Minister Maeen Abdulmalik Saeed on Thursday said the money for the oil should be spent on health and humanitarian projects.

Apart from corrosion to the aging vessel, essential work on reducing explosive gases in the storage tanks has been neglected for years. Experts said the latest problem emerged in May with a leak in a cooling pipe.

A team from Yemen's Safer Exploration and Production Operations, a public oil company partly controlled by the Houthi, sent divers in to fix the leak, narrowly avoiding the ship sinking, Ralby said.

US Secretary of State Mike Pompeo warned last week that if the tanker ruptures "it will devastate the Red Sea ecosystem" and disrupt key shipping lanes.

"The Houthi must grant access before this ticking time bomb explodes," he said.

Hodeida port is a lifeline for northern Yemen with 90% of all supplies coming through it. Any disruption would inflict further hardship on a country that is again on the brink of famine after long years of conflict.

If the vessel ruptures "you're going to have two catastrophes," said Lise Grande, the U.N.'s humanitarian coordinator for Yemen.

"There's going to be an environmental catastrophe that's bigger than almost any other similar kind... and it's going to be a humanitarian catastrophe because that oil will make the port of Hodeida unusable," she told Agence France-Presse.

Independent Yemen-based environmental group Holm Akhdar which means "Green Dream" in Arabic, warned an oil spill could stretch out from the Red Sea to the Gulf of Aden and into the Arabian Sea.

The region's ecology would need over 30 years to recover from an oil spillage of that size, it said in a recent report, adding that about 115 of Yemen's Red Sea islands would lose their biodiversity and natural habitats.

In a country where the majority of people already rely on aid to survive, an estimated 126,000 fishermen, including 68,000 in Hodeida, would lose their only source of income.

IR Consilium said any salvage operation after an oil spill would be greatly hampered by the coronavirus crisis.

"In the midst of a global pandemic and on the edge of a conflict zone, the chances of an early and adequate response are vanishingly small," it said in a report.

Doug Weir, research and policy director at the U.K.-based Conflict and Environment Observatory, said that without an independent assessment "it is impossible to determine when an incident might occur, or its form and severity."

"However the risks are clear, and the longer the dispute continues, the greater they become, and the more complex and expensive any salvage operation will be."