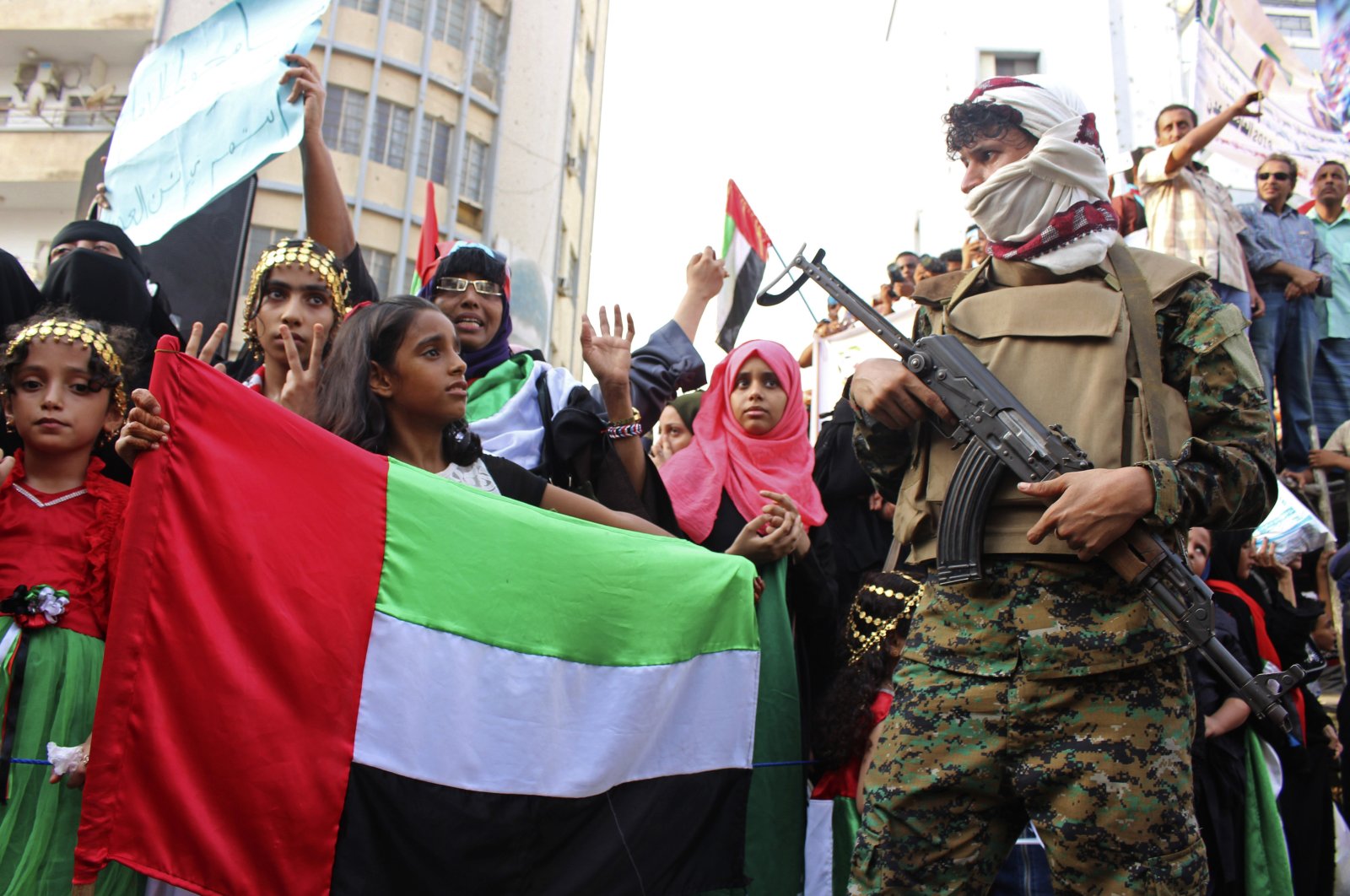 A girl holds the flag of the United Arab Emirates during a rally of supporters of southern separatists to show support for the UAE amid a standoff with the internationally recognized government, in Aden, Yemen, Sept. 5, 2019. (AP Photo)
by ASSOCIATED PRESS May 05, 2020 11:11 am
RECOMMENDED

A bid by separatists funded by the United Arab Emirates to assert control over southern Yemen has reopened a dangerous new front in Yemen's civil war and pushed it closer to fragmentation at a time when the coronavirus pandemic poses a growing threat.

The separatists’ recent declaration of self-rule over the key port city of Aden and other southern provinces also further pits Saudi Arabia and the UAE on opposing sides in the conflict, now in its sixth year. A separatist leader made the declaration from the UAE – a clear sign of its backing for the move.

The two Gulf states had been partners in a coalition waging war against Iran-linked Houthi rebels who seized the northern part of Yemen in 2014.

The two allies have conflicting interests in the south, though, and are aligned with rival sides. The UAE backs the separatists, and Saudi Arabia sides with Yemen’s internationally recognized government, led by exiled President Abed Rabbo Mansour Hadi.

The intensifying split in the south could further impede the Saudis’ efforts to find a way out of the costly and seemingly unwinnable war against the Houthis.

Saudi Arabia has accelerated its exit strategy in recent months, including conducting back-channel talks with the rebels. Last month, the Saudis declared a unilateral cease-fire, but it was rebuffed by the Houthis as a purported ploy, and fighting continued.

The UAE, meanwhile, is interested in securing shipping lanes along the Red Sea corridor and the crucial Bab el-Mandeb chokepoint off Yemen’s shoreline. The UAE is both a major oil exporter and home to DP World, a global shipping and logistics firm. By supporting Yemeni separatists, the UAE also ensures that the Saudi-backed Islah party – the transnational Muslim Brotherhood’s branch in Yemen – won’t grow too powerful. The UAE opposes Brotherhood affiliates throughout the Middle East.

“It’s becoming a conflict by proxy between the UAE and Saudis,” said Fernando Carvajal, a former member of the U.N. Security Council Panel of Experts.

Yemen’s conflict has split the country along tribal, regional and political lines. It started with the Houthis taking Sanaa, the capital, in 2014. In the spring of 2015, Saudi Arabia, the UAE and other Arab states formed a coalition to battle the rebels and curb Iran’s influence in what turned into a regional proxy war.

Since then, more than 100,000 people – fighters and civilians – have been killed. Airstrikes by the Saudi-led coalition and Houthis’ ground fighting has displaced more than 3 million people and left millions of others unable to meet basic needs, pushing them to near-famine conditions.

The bid for southern self-rule comes as the country finds itself on the brink of a devastating virus outbreak. Yemen only has 10 confirmed cases, but the World Health Organization (WHO) warned Saturday that the virus is actively circulating in Yemen and that it's preparing for the possibility of half the population getting infected.

In the south, the separatists’ power grab brought fighting to areas that had been largely untouched by violence, threatening further displacement.

Late last week, explosions and artillery fire echoed through the valleys of the island of Socotra, a UNESCO world heritage site and home to species not found elsewhere. Separatists fought with forces loyal to Hadi's government on the island, a former UAE stronghold.

The UAE officially pulled troops out of southern Yemen last summer, but it continues to exert control through its proxies to ensure it holds onto key areas on Yemen’s 2,000 kilometers (1,250 miles) of coastline.

Al-Zubaidi heads the Southern Transitional Council, an umbrella group of heavily armed and well-financed militias propped up by the UAE since 2015. The council hopes to restore an independent southern Yemen, which existed from 1967-1990.

The southern fighting leaves Hadi’s government in a much weaker position amid efforts to end the conflict with the Houthis.

The self-rule declaration robbed the Hadi government of its temporary capital, Aden. Hadi has been living in exile in the Saudi capital of Riyadh for several years, but his government maintained a presence in Aden.

His government called the announcement a “blatant coup” against a peace deal with the separatists signed in Riyadh in November. The Saudis had brokered the agreement after deadly battles between the separatists and Hadi-allied forces. The fighting left the separatists in firm control of Aden, with the help of air cover from Emirati jets.

The Saudi-led coalition said the self-rule declaration was a “strange action” and called for the implementation of the Riyadh power-sharing deal, which stipulated the handover of heavy weapons, withdrawal of rival forces and formation of a new government.

The Hadi government said it had largely upheld the November power-sharing agreement and accused the separatists of failing to meet their obligations.

In an interview with The Associated Press (AP), the foreign minister in Hadi’s government, Mohammed al-Hadhrami, appealed to the UAE to stop its support for the separatists’ council.

Derailing the November agreement “means bringing down all efforts for a comprehensive and just peace deal,” he said.

It’s unclear if Saudi Arabia has the stamina for more maneuvering in Yemen. The Saudis are already embroiled in an international oil price war and a coronavirus outbreak of their own.

Consolidating Yemen’s south to only continue their stalemate with the Houthis might prove too great a task, some observers say.

“It’s like a bullet-riddled boat and Saudis have to use all their 10 fingers and 10 toes to plug in all holes else the ship will sink,” said Carvajal.