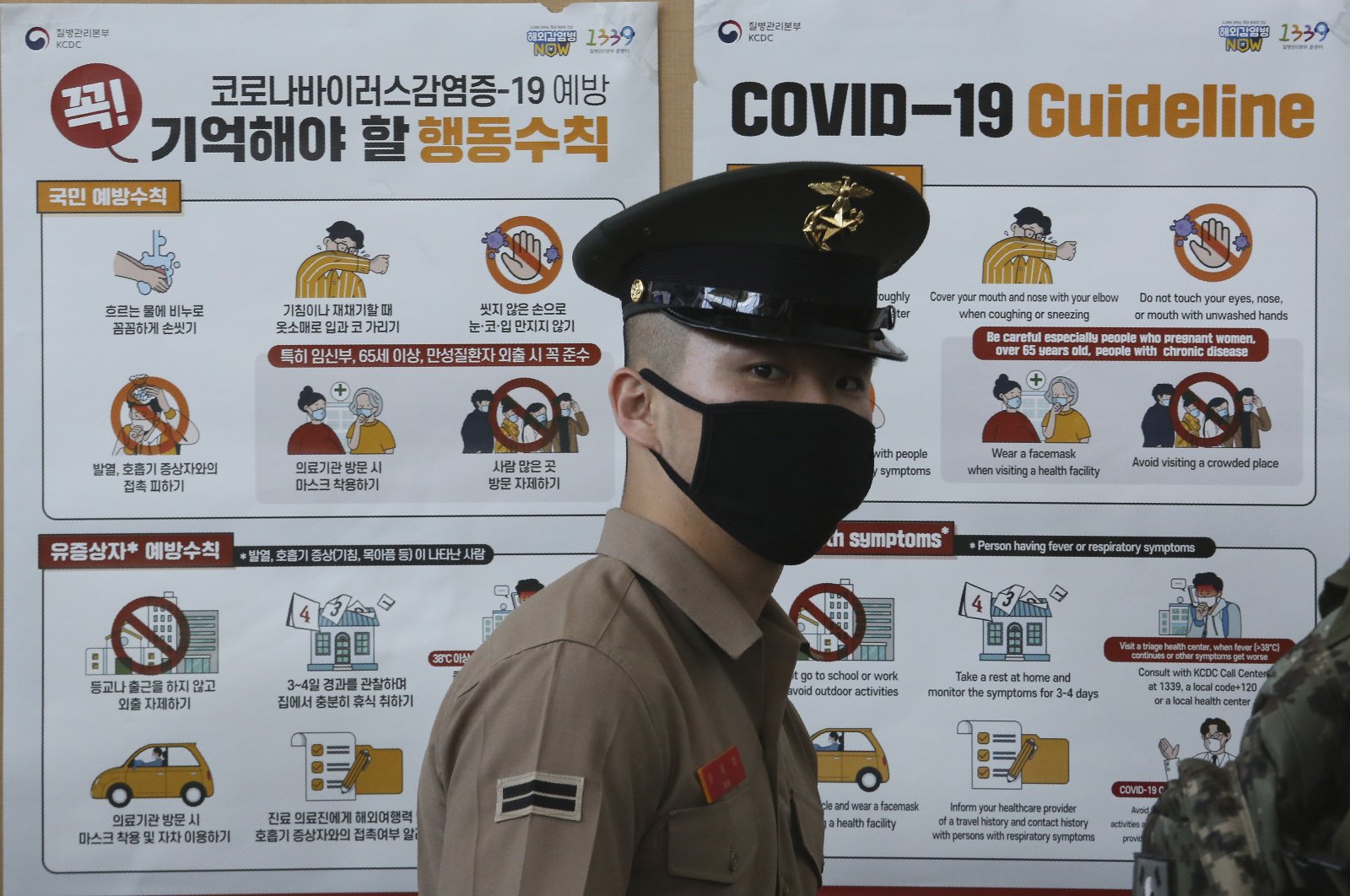 A South Korean Marine wearing a face mask stands in front of posters about precautions against the new coronavirus at Seoul Railway Station, South Korea, May 8, 2020. (AP Photo)
by ASSOCIATED PRESS
May 09, 2020 4:07 pm

Fresh coronavirus outbreaks at slaughterhouses in Germany and new cases reported Saturday in South Korea linked to a man who visited multiple nightclubs have highlighted the challenges authorities must face as they seek to open up their economies.

Meanwhile, in Belarus, which has imposed no lockdown despite increasing case numbers, tens of thousands of people turned out to mark Victory Day, in contrast to Russia, where a muted event took place over an empty Red Square.

Germany and South Korea have both carried out extensive testing and contact tracing, and have been hailed for avoiding the mass deaths that have overwhelmed other countries in their regions. But even there, authorities have struggled with finding the balance between saving lives and saving jobs.

The United States, Brazil and Italy are also wrestling with how to ease curbs on business and public activity.

Meanwhile, governments are coming under fresh scrutiny for their handling of the pandemic. German Foreign Minister Heiko Maas said that Europe must acknowledge that it “wasn’t well-prepared” for the coronavirus pandemic, though he also said that solidarity is increasing and that the 27-member European Union has “grown in the crisis.”

In the United States, internal government emails obtained by The Associated Press show that a decision to shelve detailed advice from the nation’s top disease control experts for reopening communities during the coronavirus pandemic had come from the highest echelons of the White House.

Health officials in Germany were scrambling to contain fresh outbreaks of the new coronavirus that have emerged at three slaughterhouses — two in the west of the country and one in the north.

The response is seen as a test for the government’s new strategy of getting local authorities to tackle any surge in new cases, which was agreed Wednesday as part of a plan for gradually easing restrictions and returning to normality.

In South Korea, a decline in new infections prompted the government to ease social distancing guidelines and announce plans to reopen schools Wednesday.

But on Saturday, the capital city shut down more than 2,100 nightclubs, hostess bars and discos after dozens of coronavirus infections were linked to club goers who went out last weekend as the country relaxed social distancing guidelines. Many are linked to the Itaewon leisure district of the capital, Seoul, where a 29-year-old man visited three nightclubs before testing positive.

Hard-hit Italy saw people return to the streets for their traditional "aperitivos" – a post-work, pre-dinner tradition – and revel in fine weather. This was considered a step too far for some authorities.

Milan mayor Giuseppe Sala warned that “a handful of crazy people’’ were putting the city’s economic recovery at risk, and threatened to shut down the city’s trendy Navigli district after crowds of young Milanese were seen out at aperitivo hour, ignoring social-distancing norms.

In Rome, the Campo dei Fiori flower and vegetable market was bustling Saturday morning, the first weekend Italians were allowed outside for more than just work and basic necessities. Long a center of nightlife, the Camp piazza has also come back to life at the evening aperitivo hour. A few bars have opened for takeout cocktails and snacks, catering primarily to parents of kids who romp around the square on bikes.

But confusion about what is now allowed and what is not created frustration for business owners.

Carlo Alberto, owner of the TabaCafe, an Argentine empanada bar that was selling Aperol Spritz and gin & tonic to a handful of patrons Friday, said that since opening this week he had been threatened with a fine by police due to the crowds that had formed in front of his bar.

“Am I supposed to send them home? They need a guard here to do that,” he said. “The laws aren’t clear, the decree isn’t clear. You don’t know what you can do.”

Worldwide, the virus is confirmed to have infected over 3.9 million people and killed more than 275,000, according to a tally by Johns Hopkins University based on data reported by governments.

Pakistan on Saturday allowed shops, factories, construction sites and some other businesses to reopen, while 1,637 new cases and 24 deaths were reported.

Prime Minister Imran Khan said his government is rolling back curbs because it can’t support millions of families that depend on daily wages. The government warned controls will be reimposed if the public fails to follow social distancing guidelines.

Others imposed new restrictions: Kuwait, in the Middle East, announced a lockdown from Sunday through May 30.

Spaniards learned Friday night that health authorities will allow regions that have demonstrated their hospitals are sufficiently prepared to handle a potential second wave of infections to scale back their lockdown.

In parts of Spain, mostly heavily rural regions, bars and restaurants will be allowed to open up 50% of their outdoor seating on Monday and churches, theaters and museums can reopen with limits on attendance.

But Madrid and Barcelona, the country’s largest cities, both badly hit by the virus, will remain locked down.

“The pandemic is evolving favorably, but there is a risk of another outbreak that could generate a serious catastrophe,” Spanish health official Fernando Simón said Saturday. “Personal responsibility is vital.”

The pandemic forced Russian President Vladimir Putin to mark Victory Day, the anniversary of the defeat of Nazi Germany in World War II, without the usual pomp of a military parade at Moscow's Red Square.

This year’s observance had been expected to be especially large due to the significance of 75 years since the end of the war. Instead, Putin laid flowers at the tomb of the unknown soldier and a show of military might was limited to 75 warplanes and helicopters flying over central Moscow.

Belarus took the opposite approach. Tens of thousands of people turned out in the capital, Minsk, despite sharply rising coronavirus infections, to watch a military parade celebrating Nazi Germany's defeat. Belarus has not imposed restrictions to halt the virus’ spread and authoritarian President Alexander Lukashenko has dismissed concerns about it as a “psychosis.”