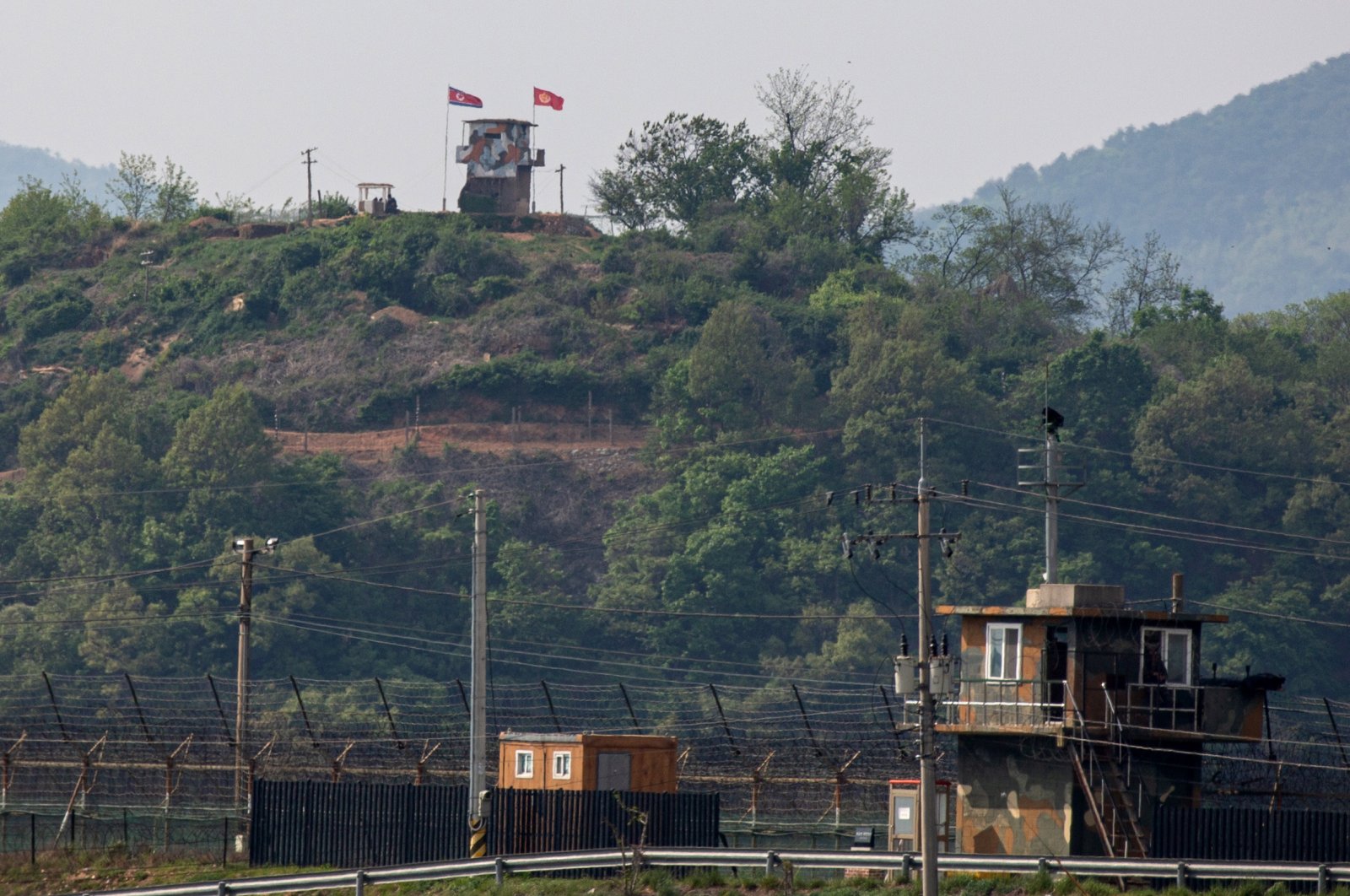 A North Koren frontier post (top) and a South Korean frontier post (front) face each other across the inter-Korean border near the city of Paju, Gyeonggi-do, South Korea, May 3 2020. (EPA Photo)
by ASSOCIATED PRESS May 03, 2020 12:01 pm
RECOMMENDED

North and South Korean troops exchanged fire along their tense border known as the Demilitarized Zone (DMZ) on Sunday, the South’s military said, the first such incident since the rivals took unprecedented steps to lower front-line animosities.

Violent confrontations have occasionally occurred along the border, the world’s most heavily fortified. While Sunday’s incident is a reminder of persistent tensions, it didn’t cause any known casualties on either side and is unlikely to escalate, observers say.

The Joint Chiefs of Staff in Seoul said in a statement that North Korean troops fired several bullets at a South Korean guard post inside the border zone. South Korea responded with a total of 20 rounds of warning shots on two occasions before issuing a warning broadcast, it said.

South Korea suffered no casualties, the military said. Defense officials said it’s unlikely for North Korea to have any casualties either as the South Korean warning shots were fired at uninhibited North Korean territory. The North’s official Korean Central News Agency hasn’t reported about the incident.

A preliminary South Korean analysis showed that North Korea’s firing wasn’t likely a calculated provocation though Seoul will continue examining whether there was any motivation for the action, a South Korean defense official said. He spoke on condition of anonymity, citing department rules.

Farming activities around the North Korean area where the firing occurred continued throughout Sunday and North Korea’s military didn’t display any other suspicious activities after the gunfire, the official said. He said there was a thick fog in the area at the time of the incident.

Later Sunday, South Korea sent a message to North Korea to try to avoid an escalation, but the North hasn’t immediately replied, according to South Korea’s military.

The exchange of fire comes a day after North Korea broadcast images of leader Kim Jong Un reappearing in public after a 20-day absence amid intense speculation about his health.

Kim earlier vanished from the public eye after presiding over a Politburo meeting of the ruling Workers’ Party on April 11 to discuss the coronavirus. Speculation about his health began swirling after he missed an April 15 event commemorating the birthday of his grandfather and state founder, Kim Il Sung, something he had never done since inheriting power upon his father Kim Jong Il’s death in late 2011.

The Korean Peninsula remains split along the 248-kilometer (155-mile) -long, 4-kilometer (2.5-mile) -wide border called the Demilitarized Zone. It was originally created as a buffer after the end of the 1950-53 Korean War. But unlike its name, an estimated 2 million mines are peppered inside and near the DMZ, which is also guarded by barbed wire fences, tank traps and combat troops on both sides.

In late 2018, the two Koreas destroyed some of their front-line guard posts and began removing mines from the DMZ as part of steps to reduce tensions. But the efforts stalled amid a deadlock in nuclear negotiations between Kim and President Donald Trump meant to convince North Korea to give up its arsenal. The diplomacy hasn’t made any headway since the second Kim-Trump summit in Vietnam in early 2019 broke down due to disputes over U.S.-led sanctions on North Korea.

Earlier this year, North Korea carried out a slew of missile and other weapons tests, but they were short-range and none posed a direct threat to the U.S. mainland.

The last time there was gunfire along the Korea border was in November 2017, when North Korean soldiers sprayed bullets at a colleague fleeing to South Korea. The defector was hit five times, but survived and is now living in South Korea. South Korea at the time didn’t return fire.

Previously, the two Koreas traded gunfire along the DMZ numerous times, but no deadly clashes have occurred in recent years. A 2015 land mine blast that maimed two South Korean soldiers still pushed the Koreas to the brink of an armed conflict. South Korea blamed North Korea for the explosion.