'Down with Assad': Economic crisis in Syria leads to rare anti-regime protests 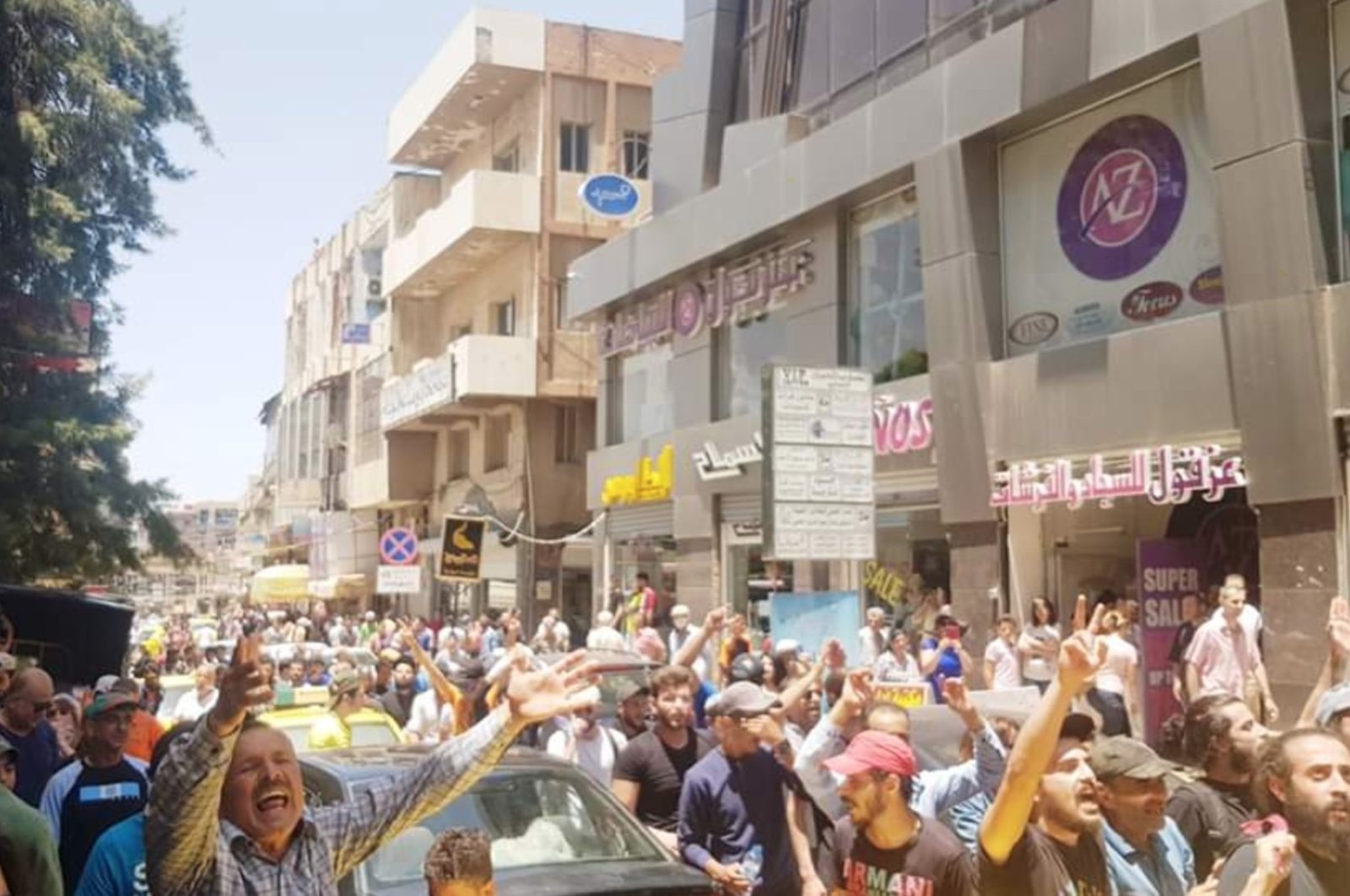 This photo taken from Twitter shows citizens protesting against the Assad regime in Syria's Sweida, May 8, 2020
by Daily Sabah with AFP Jun 09, 2020 5:57 pm
RECOMMENDED

Syrians held a third day of rare anti-Assad regime protests over deteriorating living conditions Tuesday in the regime-held city of Sweida, a war monitor said, as the value of the pound sunk.

The value of the Syrian pound has plummeted with dizzying speed in recent days on the informal market, sending prices skyrocketing nationwide and shuttering shops.

Dozens rallied in the majority-Druze city of Sweida in southern Syria for the third day running, said the Britain-based Syrian Observatory for Human Rights.

On Tuesday, men and women gathered near the main headquarters of provincial authorities and later marched through the city's streets, shouting anti-regime slogans, according to a video released by the local news outlet, Suwayda24.

"The people want to topple the regime," they shouted in chants reminiscent of the 2011 uprising.

In videos published by Suwayda24 on Sunday, crowds could also be heard chanting: "Revolution, freedom, social justice," and "Down with Bashar al-Assad."

Syria has grappled with an economic crisis compounded by Western sanctions, a coronavirus lockdown and a rapid devaluation of the local currency.

Assad now faces the toughest period of his rule during the course of the nine-year civil war in the country as a collapsing economy, a rift within his family and rising tensions with his key ally Russia are all threatening his already fragile regime.

From Saturday to Monday the exchange rate soared from 2,300 to more than 3,000 pounds to the dollar, more than four times the official rate of around 700.

Before the conflict, it stood at 47.

Even before the latest devaluation, food prices had increased by 152% Sweida in the year to April, according to the World Food Programme.

The Sweida region south of Damascus is the Syrian heartland of the country's Druze minority community, an offshoot of Shiism.

Sweida has been mostly spared by the Syrian conflict, and only faced sporadic terrorist attacks they managed to repel.

As a response to the criticisms, however, the regime refuses to take responsibility and points at the U.S. and its sanctions as the main causes of the concerning situation. After the Assad regime last week called U.S. sanctions against the country “economic terrorism,” the United States responded, saying that it was the regime’s destructive war against its own people and the targeting of vital facilities that wrecked the country’s economy.

“Bashar al-Assad and his regime can’t cover up the truth – for more than nine years they have waged a bloody war against the Syrian people, destroying homes, schools, shops, and public markets. The regime’s destructive war has crushed the Syrian economy, not U.S. or EU sanctions,” the U.S. Embassy in Syria stated Saturday.

Syria's war has devastated the country's economy since 2011, plunging 80% of its people into poverty, according to the United Nations. Despite relative quiet in the country's remaining battlefields, early 2020 has only seen the situation worsen. Much of the economy in regime-held areas shuttered in March to prevent the spread of the pandemic.

The U.S. Embassy in Syria last week declared its support for the country's people protesting the rule of the Assad regime. “In this endeavor, we recall the sacrifices of our Syrian friends and partners in their own struggle for democracy, human rights and freedom. We openly commit to this painful struggle. We will continue to stand with the Syrian people as we work to lead by example at home,” it said.

The U.S. had most recently imposed sanctions against the Syrian regime's defense minister, Ali Abdullah Ayoub, in March due to the regime’s offensive on Syria’s northwestern Idlib province, which displaced nearly 1 million civilians, according to U.N. numbers.

The European Union also renewed its sanctions against the Assad regime and his top political officials, military officers and businesspeople over the group's continued crackdown on civilians in the conflict-torn country last month saying that sanctions would be extended until June 1, 2021, "as the repression of the civilian population continues."

EU sanctions are designed to specifically target these people and these activities, avoiding negative impacts on the general population. The European Union started these types of direct punishments as early as 2011. More than 270 such individuals and 70 such entities fall under EU sanctions. These people are banned from traveling to the EU, their money and their assets in EU bank accounts have been frozen, while products used to make chemical weapons, spying technologies and certain types of arms produced in the EU cannot be sold to Syria. Moreover, EU luxury goods cannot be exported to Syria just as cash and gold transfers to Syria’s central bank are also forbidden because they were used to finance the repression and profit from the war.