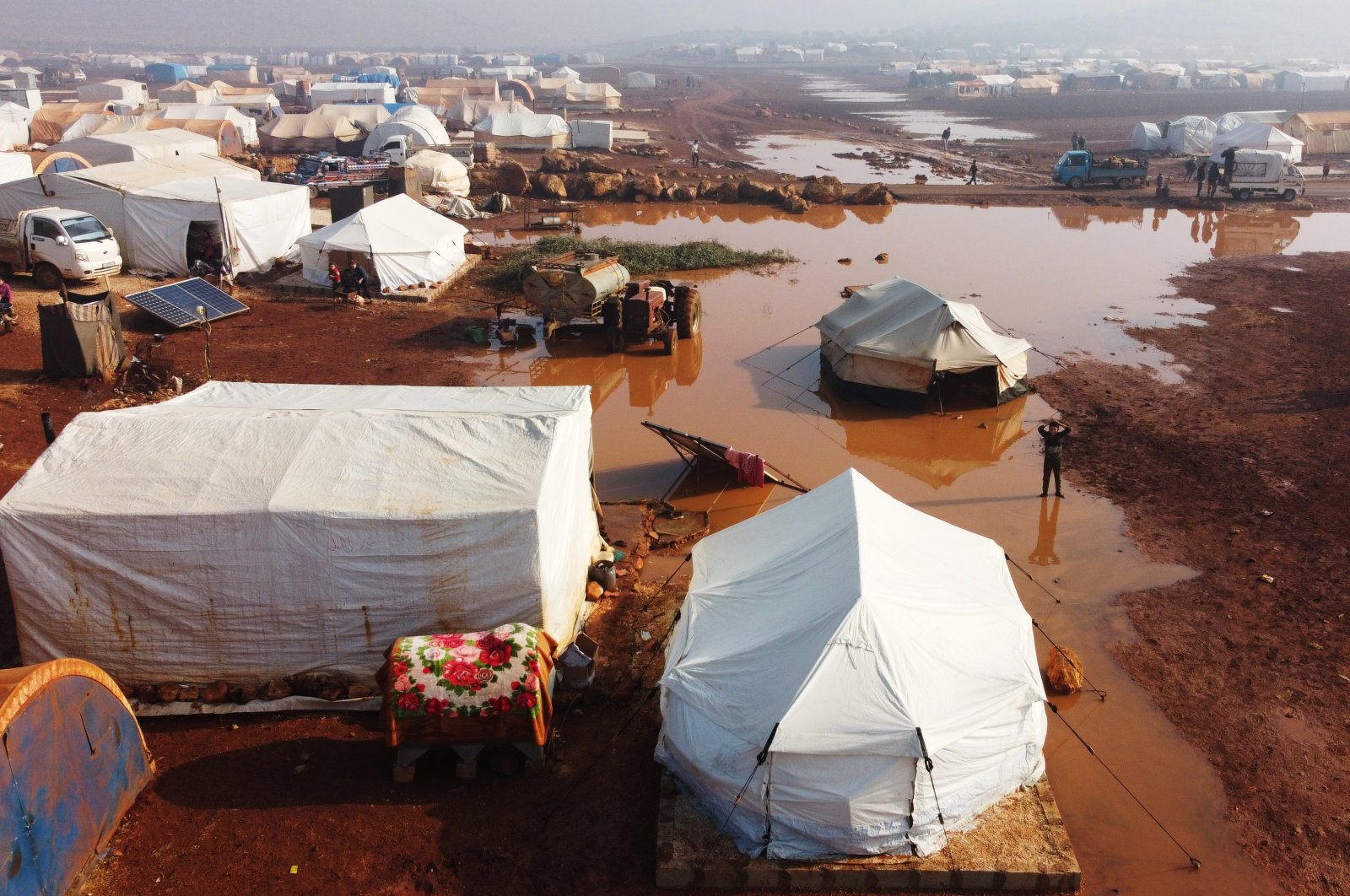 Winter conditions have started to show their damaging impact on northeastern Syria's Idlib province, where thousands of displaced Syrians in need of humanitarian assistance struggle to hold onto life in refugee camps.

Over the weekend, heavy rain hit the province, leaving the camps in mud and water as shelters become unusable. Now, the refugees are calling on the international community to clear the camp, provide firewood, hygiene products and food as there is a scarcity of even basic necessities.

"Our tents are flooded. We are expecting humanitarian aid," said Amir Mercan, head of the Keferarouk camp in northwestern Idlib, as quoted by Anadolu Agency (AA) Saturday.

Since the whole camp is filled with puddles, Mercan said, the water trucks that are supposed to distribute water among the camp residents in normal circumstances cannot deliver to the camp.

Expressing that they got through the night with many difficulties, Mercan stated that the families whose shelters have become unusable have been resettled to other tents.

"We are cold. It's very chilling. We have nothing. When there is rain, we just wait for it to stop helplessly," said Haşfe Bekkur, whose camp was also flooded.

Underlining that she suffered a lot in the winter conditions, Bekkur said that they are trying to warm themselves with plastic pieces they collect outside the camp.

"I leave everything's punishment to God. We have been living here for a year now. At first, we were receiving aid. Now, they are as few as if there is no aid at all," she continued, adding that her only dream is to have some firewood to get warm.

According to Mohammed Hallaj, head of the Response Coordination Group in Idlib, during the 48 hours of rain, a total of 174 tents have become unusable, while 318 others have been damaged.

Children, however, have become arguably the group most affected by the rain.

Lacking proper winter clothes, including coats and boots, the children in the al-Khazzan camp in northern Idlib's rural areas could face life-threatening conditions, while families are concerned about the children's health as there are no medical centers close to the camp.

"We don't go to school. I help my mother. I try to bring her water. I have a big wound on my foot, but we couldn't go to the hospital because there is heavy rain and the hospital is very far away," said Nawal, a Syrian girl, quoted by Ihlas News Agency (IHA).

"We are in a troubling condition. I am living here for eight months and no humanitarian aid group has come to help. There is no firewood or drinking water," Abdullah, another resident of the camp, also said.

Living with her children in the camp, a single mother named Umm al-Abd said children have been helping their parents remove the water from the camps.

"We don't even have clothes. There are no places to buy groceries. We cannot walk due to the mud. Everything is wet," she said.

Idlib, the last opposition stronghold in Syria, has been battered by repeated military offensives by the Bashar Assad regime and is home to nearly 4 million people, most of them displaced and living in tent camps or unfinished buildings.

Syrian civilians who are displaced and living in overcrowded makeshift tent camps have struggled with heavy rain and floods while awaiting food, clothing and firewood. Tents that are unsuitable for winter conditions often catch fire while civilians try to warm themselves or get flooded with mud due to the region’s strong winds and rains.

Displaced Syrians reminisce about past

Even though they are thankful to have survived the regime's attacks, the displaced Syrians still desire to go back to the peaceful times of the past, before the civil war erupted back in 2011.

Displaced Syrian civilians from the city of Aleppo are one of the primary examples of this nostalgic aspiration, as they long to return to their peaceful life before being forced to leave their homes due to besieging regime forces four years ago.

The Assad regime imposed a blockade on approximately 300,000 civilians in the eastern districts of Aleppo's city center for four months, in what was the worst humanitarian crisis caused by the near-decade of civil war.

Ankara and Moscow agreed to evacuate the local population, with convoys starting to move out of the area just two days after the truce was declared in movements that would last a week.

Some 45,000 civilians from Aleppo were settled in refugee camps in opposition-controlled areas in the neighboring Idlib province, which is adjacent to the Turkish border.

Muhammad al-Amiri, who left his home in Aleppo four years ago and took refuge in the Samidun refugee camp in Idlib, told AA that they went hungry for two or three days during the siege.

"We couldn't find bread. We bought a box of tahini halva for a car. We never forgot the sudden sorties of warplanes. We lived through very horrible moments that are difficult to describe," he said.

"My family, relatives and neighbors have scattered. I don't know anything about them. I cry when I remember the old days." he said.

Amiri explained that he was struggling to survive in the camp and that the biggest challenge he faced was not being able to support his family.

People were able to take very few of their belongings, Amiri said, adding: "I couldn't bring anything worth much with me. I only left with my dignity."

Another displaced Aleppine, Bushra Haj Fares, said many could not even leave their homes for fear of airstrikes while the blockade was in place.

She recounted that they had to move frequently due to the attacks in Aleppo. "My husband was going out to find food. We anxiously waited on the balcony until he came back."

Fares said her only desire was to live in peace with her children.

"Thank God, we left safely with my children and my husband. This is the most precious thing for me," she added.