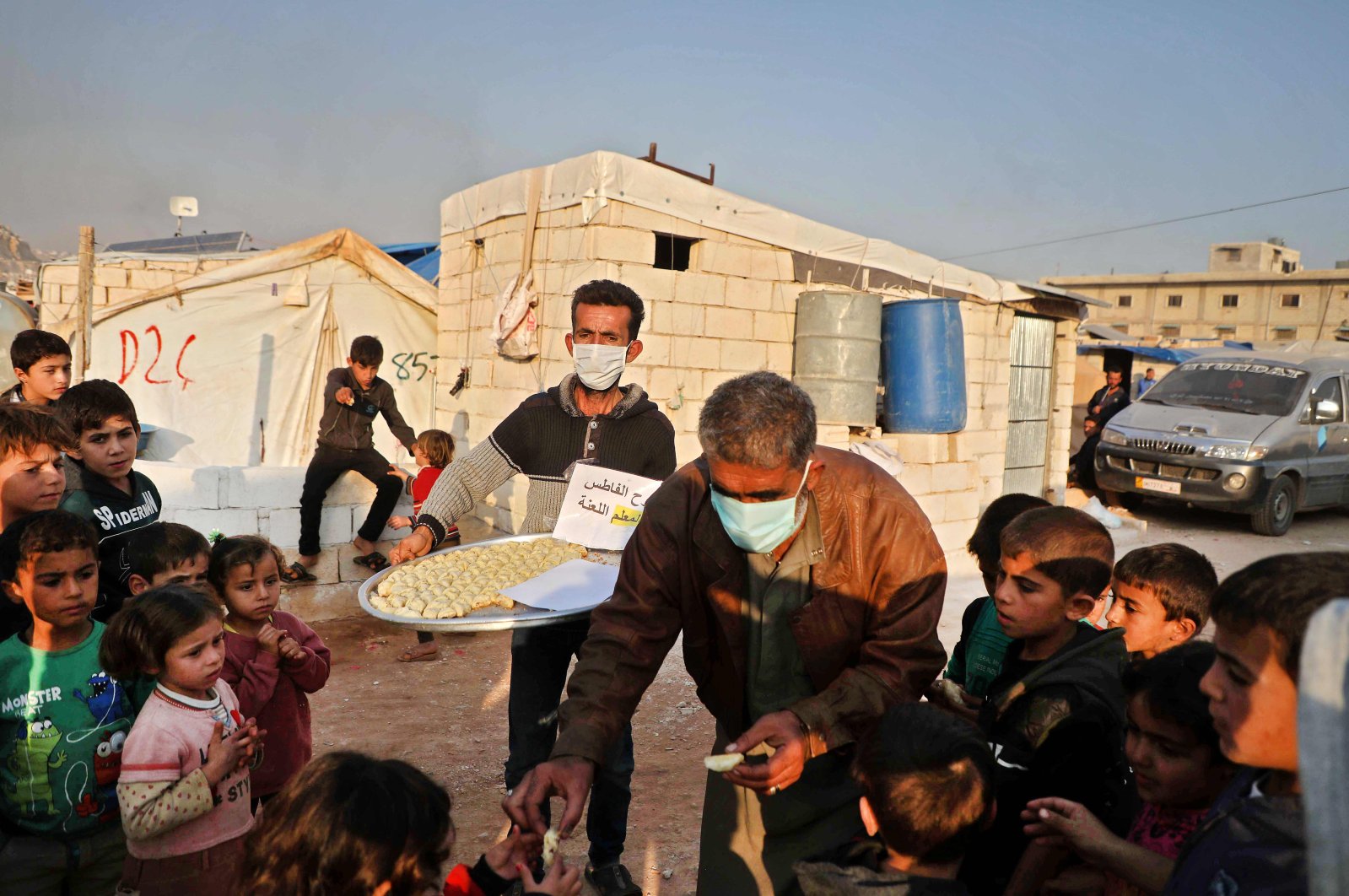 Men distribute traditional desserts to children at a camp for displaced Syrians in Kafr Dariyan, in the north of Syria's northwestern Idlib province, Nov. 16, 2020. (AFP Photo)
by Daily Sabah with DPA Nov 18, 2020 10:51 am
RECOMMENDED

Human rights organizations warned about the worsening coronavirus outbreak in Syria on Tuesday.

According to official figures released by the Syrian regime, 6,700 people have been infected in the war-torn country.

However, the Syrian Observatory for Human Rights (SOHR) warned that, based on reports obtained from "reliable medical sources in regime-controlled areas," the total number of confirmed COVID-19 cases has reached some 60,100 – nearly 10 times the official regime figure.

According to the information, 17,250 people have recovered from the virus and 3,220 have died in the country. The cases were distributed across all Syrian provinces but most of the deaths and infections have been concentrated in Aleppo, Damascus and Rif Dimashq.

This is not the first time the regime has been accused of covering up the data showing the extent of the country's COVID-19 outbreak.

In March, the head of a local Damascus-based nongovernmental organization said Syria was limited in its ability to determine COVID-19 cases due to the fact there was only one main lab testing for the virus at the time. Some cases were being treated in military hospitals, added the source, speaking on condition of anonymity.

Many pundits believe that the virus has been more widespread than anticipated since the beginning of the pandemic due to Syria's low testing capacity and a lack of transparency.

After weeks of denying the existence of the virus within the country, the regime introduced a series of confinement measures in March to stem the spread of the virus. The Syrian regime loosened COVID-19 lockdown restrictions on May 26 by canceling a nighttime curfew, allowing travel between provinces and announcing the reopening of mosques. The decision came as the war-torn country grappled with a crippling economic crisis, although official cases of COVID-19 continued to rise. Syria's borders, however, remain closed.

Despite loosening measures, the regime postponed its elections twice due to the pandemic, and Assad himself even warned of a "catastrophe" if the easing of lockdown measures is mishandled.

Syria's health infrastructure has been in worrying condition for years due to the war. Hundreds of medical facilities have been bombed, mostly in regime airstrikes; half the hospitals and health centers are functioning only partially or not at all, while 70% of the medical personnel have fled the country.

According to the World Health Organization (WHO), only about half of all hospitals in Syria are fully functional. One-quarter of the hospitals suffer from a lack of staff, equipment or medicine.

"Thousands of lives, including those of health workers, continue to be at risk with no transparent and effective information, or testing," the organization asserted in a statement.