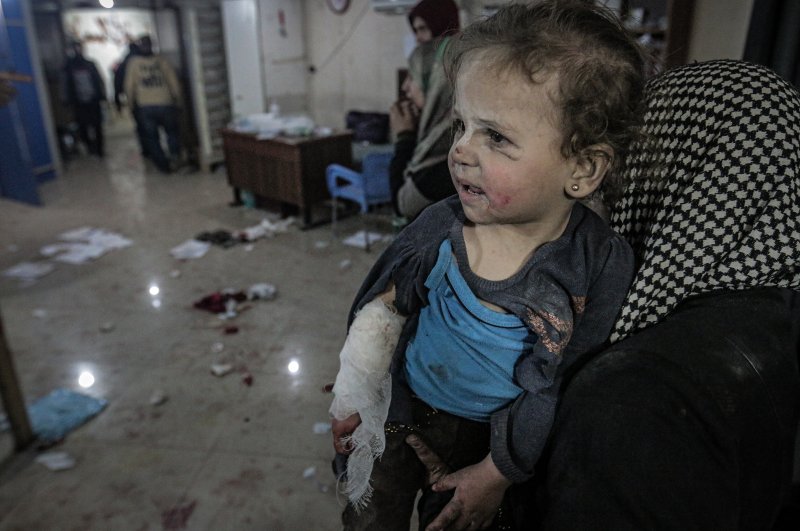 At least 20 civilians died in Syrian regime strikes on targets including schools, a monitor said Tuesday, in a relentless advance on the country's last major opposition holdout that saw loyalists seize a symbolic town.
Pro-regime bombing killed at least nine children, the Syrian Observatory for Human Rights said, as Russian-backed regime forces wage a fierce offensive to seize Idlib, the final major territory in Syria still controlled by opposition forces.
Regime strikes in Idlib, the main city in the densely populated, ever-shrinking enclave of the same name, killed a schoolchild and three teachers as well as two others, said Observatory head Rami Abdel Rahman.
At least six children were among 10 civilians killed in Maarat Misrin, a town just north of Idlib city on the road to the Turkish border, the Observatory said.
Another four people, including a mother and her two children, died in regime fire on Binnish, northeast of Idlib city, he said.
Later, the Observatory reported that regime forces had recaptured 19 towns and villages over 48 hours.
Among them was Kafranbel, a symbolic town that was among the first to oppose Damascus.
The Idlib region hosts some 3 million people in increasingly desperate conditions.
Save the Children on Tuesday called for schools to be spared.
"Schools must be safe havens for children, even in a conflict zone," the charity's Syria response director, Sonia Khush, said.
"Today's attacks are another sign that fighting in northwest Syria has reached catastrophic levels of violence against children and civilians ... Nowhere is safe, not even school," she said.
With backing from Russia, the Syrian regime and allied forces have in recent weeks pressed a major offensive against the last bastion of opposition to the regime.
The retaking of Kafranbel, which became famous for often humourous signs at its weekly demonstrations, is a symbolic blow to Syria's nine-year uprising.
From the first days of the peaceful uprising against the rule of Bashar Assad in 2011, Kafranbel gained worldwide renown as a bastion of protest.
In 2012, it was rocked by fighting between regime fighters and defectors from Assad's army, soon slipping out of the government's control.
A town of some 20,000 people, it became known for humorous signs in English and Arabic that its residents held up at weekly demonstrations.
"Down with the regime – and the opposition," a sign at one of the town's protests read in 2011.
Activists from Kafranbel gained renown for not only speaking out against Damascus but also criticizing extremists and the radicalization of the uprising against Assad.
Prominent activists Raed Fares and Hamod Jnaid were killed by unknown gunmen in the town in November 2018.
The parts of Idlib still held by opposition forces have shrunk to an area roughly the size of Majorca, hosting more than 3 million people – half of them already displaced by violence elsewhere.
The offensive has displaced close to 1 million people since December, amid bitter winter cold.
Syrian and Russian raids have repeatedly targeted schools and health facilities in the area, despite appeals from aid groups and world powers to respect international law.
Several countries and the United Nations have made urgent calls for a cease-fire in Idlib, where the current humanitarian emergency has been described as the worst since the start of the conflict.
"Vast numbers of families have been forced from their homes many times in search of some semblance of safety and stability," Khush said.
Russia earlier this month blocked a U.N. bid to end the Damascus regime's assault on Idlib.
Moscow's Foreign Minister Sergey Lavrov said Tuesday that a truce at this stage would be tantamount to "capitulating before terrorists."
The force that has controlled the Idlib region in recent years is dominated by Hayat Tahrir al-Sham, an extremist group led by ex-members of al-Qaida's former Syria franchise.
Many of the crowded territory's residents are civilians who were forced from their homes in earlier phases of a war that has displaced more than 11 million people since 2011.
According to the U.N.'s Office for the Coordination of Humanitarian Affairs, some 170,000 people are sleeping rough in Idlib province, which saw snow and sub-zero temperatures earlier this month.