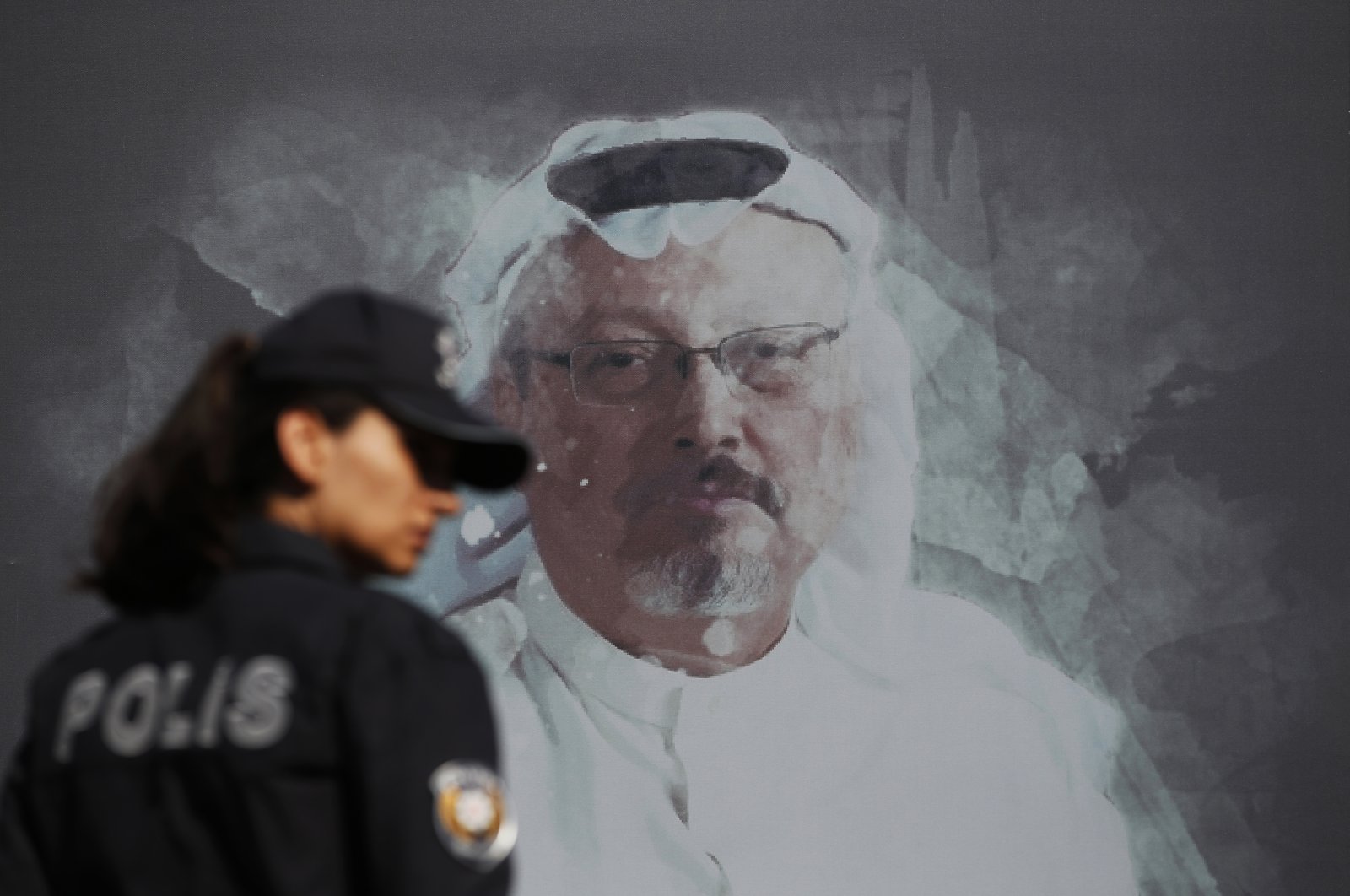 A Turkish police officer walks past a picture of slain Saudi journalist Jamal Khashoggi prior to a ceremony, near the Saudi Arabia consulate in Istanbul, marking the one-year anniversary of his death, Oct. 2, 2019. (AP Photo)
by Daily Sabah with Wires Jul 06, 2020 6:03 pm
RECOMMENDED

The British government on Monday identified 49 individuals and organizations in Saudi Arabia, Russia, Myanmar and North Korea to be sanctioned under a new regime targeting people who violate human rights.

Foreign Minister Dominic Raab said the sanctions targeted those behind "some of the notorious human rights violations in recent years."

The sanctions will target 25 Russian nationals the U.K. says were involved in the mistreatment and death of lawyer Sergei Magnitsky and 20 Saudi nationals held to be involved in the death of journalist Kamal Khashoggi, the country's Foreign Ministry said Monday.

The measures include asset freezes and travel bans and represent the first time the U.K. will alone name and penalize individuals and organizations accused of human rights abuse.

Addressing parliament, Raab said: "The first designations will cover those individuals involved in the torture and murder of Magnitsky, the lawyer who disclosed the biggest known tax fraud in Russian history."

"The designations will also include those responsible for the brutal murder of the writer and journalist Jamal Khashoggi," Raab added.

Khashoggi, a columnist for The Washington Post, was killed and dismembered by a group of Saudi operatives shortly after he entered the Saudi Arabian consulate on Oct. 2, 2018, in Istanbul where he went to obtain marriage-related documents. His body was never found.

Initially denying and later downplaying the incident as an accidental killing in a fistfight, almost three weeks after the disappearance, Riyadh finally admitted that Khashoggi was murdered in a premeditated action but denied any involvement of the royal family.

A Turkish court on Friday began trying 20 Saudi nationals in absentia over the Khashoggi murder. Istanbul's Heavy Penal Court No. 11 heard arguments of Khashoggi's fiance, Hatice Cengiz and some other witnesses.

The British sanctions list mostly include names that are also being tried in Turkey, including Saud al-Qahtani, a former adviser to Saudi Crown Prince Mohammed bin Salman (MBS), and Ahmed al-Asiri, ex-deputy chief of Saudi intelligence.

A 117-page-long indictment prepared by the Istanbul Prosecutor’s Office accuses the two of "instigating premeditated murder with monstrous intent." Eighteen others are accused of carrying out the killing with "monstrous intent and torture."

Also on the sanctions list is Min Aung Hlaing, commander-in-chief of the Myanmar armed forces, and Myanmar army Cmdr. Soe Win. They are accused of orchestrating systematic violence against Myanmar’s Rohingya Muslim minority.

Myanmar’s military in August 2017 launched what it called a clearance campaign in Rakhine state in response to an attack by a Rohingya insurgent group. The campaign forced about 740,000 Rohingya to flee to neighboring Bangladesh and led to accusations that security forces committed mass rapes and killings and burned thousands of homes.

North Korean organizations – the Ministry of State Security Bureau and the Ministry of People’s Security Correctional Bureau – were sanctioned for running prison camps in the authoritarian Communist state.

Britain has previously imposed sanctions as part of the European Union or under the auspices of the United Nations. Since leaving the EU in January, it has implemented its own version of the U.S.’ Magnitsky Act, which allows authorities to ban or seize assets of individuals guilty of human rights abuses.

The U.K. law authorizes the British government to prevent sanctioned individuals from entering the country, channeling money through British banks, or profiting from the U.K. economy.

"You cannot set foot in this country, and we will seize your blood-drenched ill-gotten gains if you try," Raab said.

Raab said more people would be added to the sanctions list, but he wouldn't "preempt what the next wave of designations will be."

Moscow threatened to retaliate following the announcement. "The Russian side reserves the right to take retaliatory measures in connection with Britain's hostile decision," the Russian embassy in London said in a statement without elaborating.

Leonid Slutsky, head of the foreign affairs committee in the lower house of the Russian parliament, denounced the sanctions as "Russophobic nonsense" and said Moscow reserves the right to make a "well-balanced" retaliatory action. "London has made another move toward degradation of Russia-U.K. relations," he said, according to Russian news agencies.

Among the names on the U.K. sanctions list is Alexander Bastrykin, Russia's top investigator, whose Investigative Committee reports directly to President Vladimir Putin. He has also been blacklisted by the U.S. and Canada over the death of Magnitsky, a Russian lawyer arrested in 2008 after alleging that Russian officials were involved in large-scale tax fraud. Magnitsky died in a Moscow prison in 2009 after complaining of mistreatment.

U.S. Secretary of State Mike Pompeo hailed Britain for imposing human rights sanctions on its own for the first time, including against an angered Russia.

"This sanctions regime marks the beginning of a new era for U.K. sanctions policy and cooperation between our two democracies," Pompeo said in a statement.

"The U.S. will continue to seek out additional allies and partners to jointly leverage all tools at our disposal to deny access to the U.S. and international financial systems to all those who engage in serious human rights abuses," he added.